These Are The Best Cities For People Of Color In Tech

“If the American economy was the Titanic and the iceberg that sank the Titanic was the financial crisis, then STEM jobs would be the few available lifeboats rescuing passengers.” That’s according to SmartAsset’s research team.

The financial software and data firm just completed its second annual analysis of Census Bureau data on the demographics of STEM employment in the 50 U.S. cities with the largest STEM workforces.

SmartAsset’s researchers found that overall, those who hold jobs in STEM tend to be a homogenous group of white males. Despite initiatives put in place by the federal government to increase diversity in STEM education (like the National Academic STEM Collaborative), the study found that a lack of diversity persists and is not uniformly distributed.

As the demand for tech jobs continues to rise—tech positions made up eight of the top 25 best jobs in the U.S. this year—business and government leaders are concerned that the majority of them won’t go to underrepresented minority workers, according to SmartAsset.

However, the researchers found that the existing data indicates there has been some improvement in the diversity of the STEM workforce overall.

The national index this year was 58.89 compared to last year’s 53.50 out of a possible 100 points. SmartAsset declined to comment on whether or not this could be due to the uptick in diversity initiatives at tech companies over the past two years, because they said their study looked solely at the data.

It’s important to note that while SmartAsset used the same methodology as they did for last year’s analysis, this year’s study is based on one year of census data, because of the switch from the Census Bureau’s three-year survey. That meant that instead of ranking 210 cities as they did last year, SmartAsset only compared 50 cities.

Index scores by city were based on the distribution of the workforce among the eight primary racial and ethnic groups tracked by the U.S. Census Bureau, as well as gender breakdowns for each.

Each city was given a score out of a possible 100 points. Their final tables only show the four largest groups: Asian, white, Hispanic, and black. The more evenly spread a city’s workforce was among all eight groups, the higher the score, according to SmartAssets methodology.

That goes for tech hubs, too, according to Nick Wallace who completed the data analysis for this study. Silicon Valley’s neighbor San Francisco rose to 13th place from 29th, Silicon Alley’s New York leaped to second place from eighth. L.A.’s Silicon Beach climbed from ninth to fourth place this year. 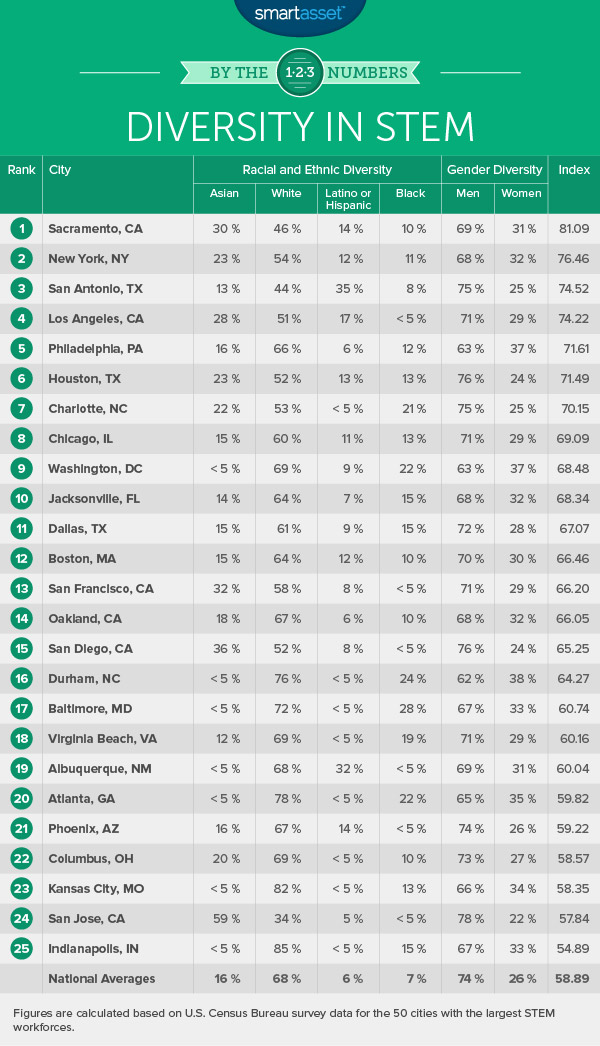 It’s not a tech hub, but Sacramento tops the list this year with an index score of 81.09 out of a possible 100. This could be attributed to the fact that the city operates one of the largest local innovation funds in the country with $8.2 million. For comparison, L.A. has a $1 million budget for innovation, according to a recent report on Techwire. They also cite how government initiatives like the fund may also encourage more fair hiring practices.

New York climbed the highest of all the cities in the top ten over last year in this analysis. The research cites the city as the birthplace of organizations like GirlsWhoCode effective influencers to close the gaps of both gender and diversity in tech.

At number three, San Antonio rose from 19th place last year. While the researchers point out that the city is still one of the most male-dominated cities in the country at 75%, it does have a large percentage of Latino or Hispanic STEM workers. For comparison, San Antonio has 35% Hispanic workers in the field while whites make up 44%.

At number four, Los Angeles gets a high index score overall (74.22). This is due mostly to the fact that it has a large Asian population whose presence make up 28% of their total STEM workforce. They have 17% Hispanic representation in STEM, but less than 5% black workers.

Rounding out the top five is Philadelphia, which hung on despite dropping four points in its overall index to 71.61. The researchers note that the decrease is due to a drop in ethnic diversity among the STEM workforce and a 9% increase in white workers compared to 2015. “On the bright side they are still one of the best cities for gender diversity, with women making up 37% of their STEM workforce,” the researchers write, “This is compared to the national average of 26%.”

Other notably rated cities include Charlotte (ranked at number seven), which SmartAsset found to be the only city to have two minorities making up greater than 20% of their STEM workforce. In the tenth spot, Jacksonville, Florida, makes its debut as a STEM contender. Analysis indicates this may be partly due to a workforce training initiative dubbed “It’s Your Money Tax Cut Budget.”

The $30 million project was introduced by Governor Rick Scott in 2014 and aimed at creating resources for job seekers and employers to boost their science, tech, engineering, and math labor pool. The researchers say, “As far as diversity, Jacksonville has one of the larger percentages of black STEM workers, at 15% compared to the national average of 7%.”