‘A Million Questions’ From Descendants of Slaves Sold to Aid Georgetown

African-Americans have long lived with unanswered questions about their roots, missing branches in their family trees and stubborn silences from elders reluctant to delve into a painful past that extends back to slavery. 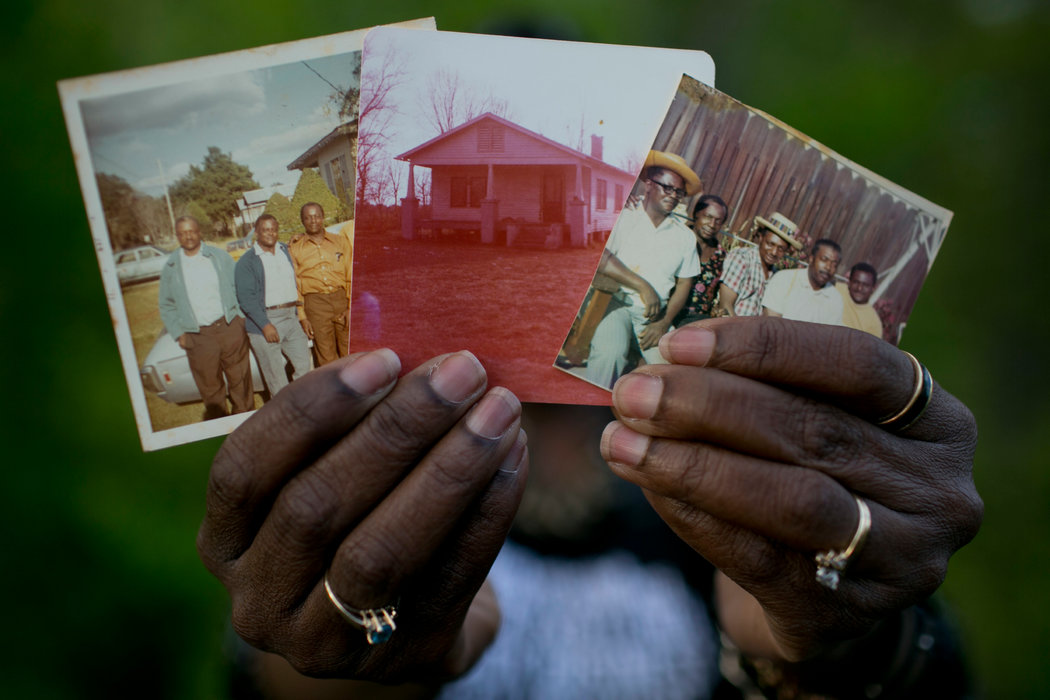 The great-grandfather of Rochell Sanders Prater was a slave sold by Jesuit priests to help keep Georgetown University afloat. She shared family photos, including one of her grandmother’s house. Her father is in the photo at right, wearing glasses. (Credit Andrew Spear for The New York Times)

African-Americans have long lived with unanswered questions about their roots, missing branches in their family trees and stubborn silences from elders reluctant to delve into a painful past that extends back to slavery.

This month, scores of readers wrote to us, saying they had finally found clues in an unexpected place: an article published in The New York Times.

The story described the sale of 272 slaves in 1838. The men, women and children were owned by the nation’s most prominent Jesuit priests. And they were sold — for about $3.3 million in today’s dollars — to help the college now known as Georgetown University stay afloat. We asked readers to contact us if they suspected that their ancestors were among those slaves, who had labored on Jesuit plantations in Maryland before being sold to new owners in Louisiana.

With the help of Judy Riffel, a genealogist hired by the Georgetown Memory Project, a group dedicated to supporting and identifying the descendants of the slaves, we were able to confirm the ancestry of several respondents. Here are their stories, edited and condensed for clarity. 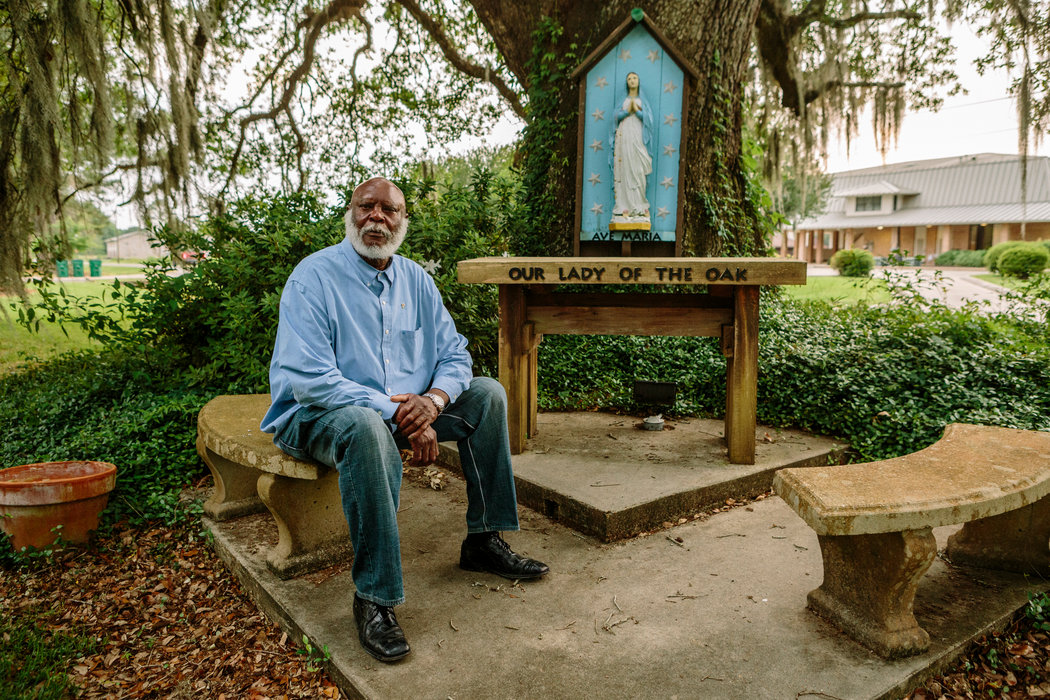 Several of Charles Hill’s ancestors were among people the Jesuits sold to a Louisiana slave owner to ensure the survival of Georgetown. (Credit William Widmer for The New York Times)

My father always told me that we came out of Maryland, and that the name of the slave ship was Jackson. But that’s all he would tell us.

That whole part of my family is Catholic. They didn’t cuss. They didn’t drink. They didn’t smoke. I’m the middle kid. I wanted to be a bad boy, and my father wasn’t going to have that.

You know, that’s pretty much what saved me. I grew up with all those renegades and hoodlums, but I’m 74 years old and haven’t been to prison.

I feel good about knowing more about my family’s history. My uncle Abraham was a carpenter like my great-great-grandfather. He thought he was Noah, he could make boats so smooth. Peter Hill, the grandson of Bill Hill, a slave, was a blacksmith. And you can’t beat me with sheet metal and a hammer. I owned my own body shop in Santa Monica, Calif.

Bill Hill appears on the passenger list of the Katherine Jackson, which transported the slaves to Louisiana in 1838.

What should Georgetown do? Put up a monument with our forefathers’ names on there. Give some scholarships to the kids. I’m 74. I’m on my way out of this world. If I could leave something behind to educate my grandkids, that’s what I would like to do. 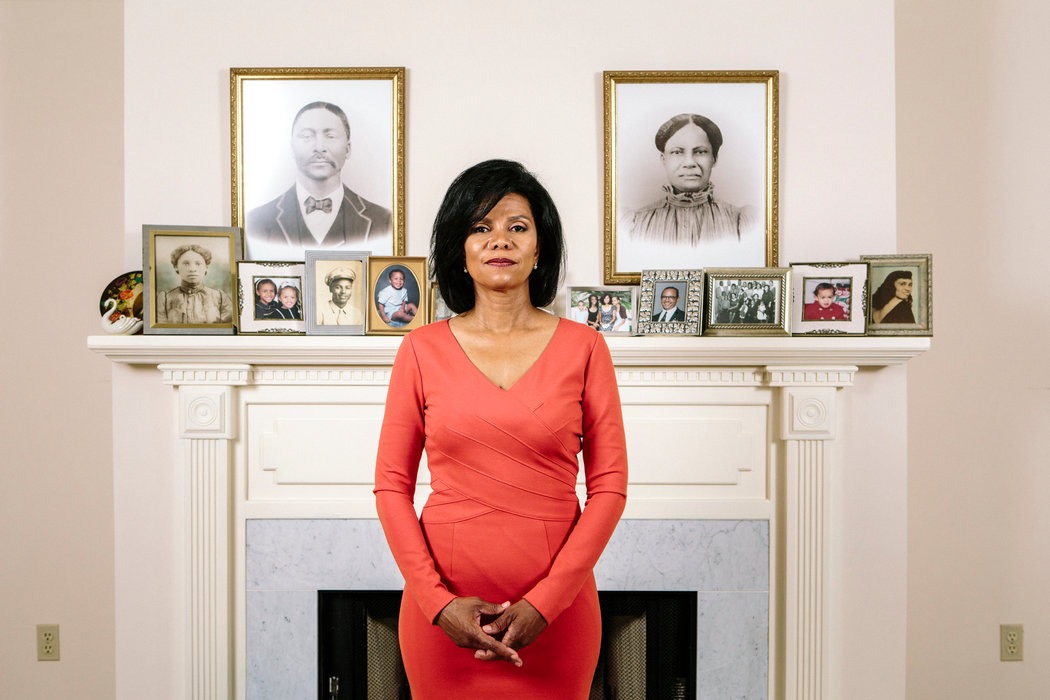 Sandra Green Thomas at her home in New Orleans. Pictured behind her are William Harris and Charity P. Harris, her great-grandfather and great-grandmother, who were slaves in Maringouin, La. (Credit William Widmer for The New York Times)

After the Civil War, they amassed property as a family. They founded St. Mary’s Chapel, and there was a school for colored children of the same name. I knew all about my great-grandfather. But I didn’t know the details about his parents or the Catholic Church or Georgetown. In the mid-1990s, I lived within walking distance of Georgetown. I was pushing my babies around in a stroller, going on campus, without knowing anything about the connection.

I read The New York Times, and I saw the story there. I saw the photo of the cemetery, and I saw Maringouin, La. I went to the website of Georgetown’s slavery archive and saw the names of my relatives.

I am still processing it. I find it somewhat comforting and amazing that the immediate family remained intact after being sold. But there’s some sadness, too. When I first read it, I was just looking at the facts. But when you start thinking about it, it is really horrific.

My great-great-grandmother had a 5-month-old child when she was forced onto that ship. That means she was pregnant or just giving birth when she was sold. When I realized that, my heart just broke for her. 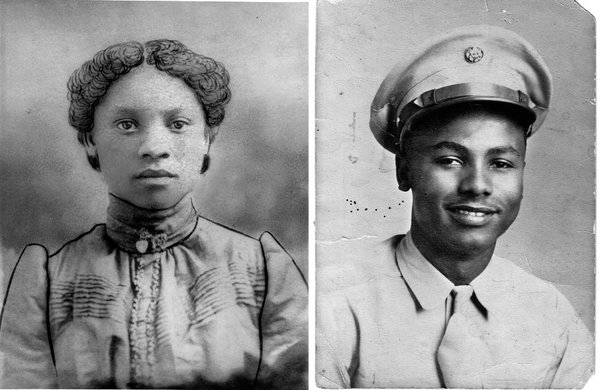 There’s a lot of hand-wringing, a lot of “Oh my goodness, that was terrible. What can we possibly do?” But there’s a lot Georgetown can do. The most obvious beginning is some sort of formal acknowledgment and apology from Georgetown officials to the descendants.

Next, since the Jesuits took away these individuals’ right to freedom and self-determination, it follows that a Georgetown education should be offered to all descendants who wish it. One of the values espoused in this nation is that a good education is the best way to achieve personal liberty and self-determination. Of course, there are going to be people who aren’t interested in that, so for them there would have to be other remedies.

It’s complicated, but not insurmountable. It’s actually pretty clear-cut in a situation like this. There’s so much continuity from generation to generation. Our families are still here. 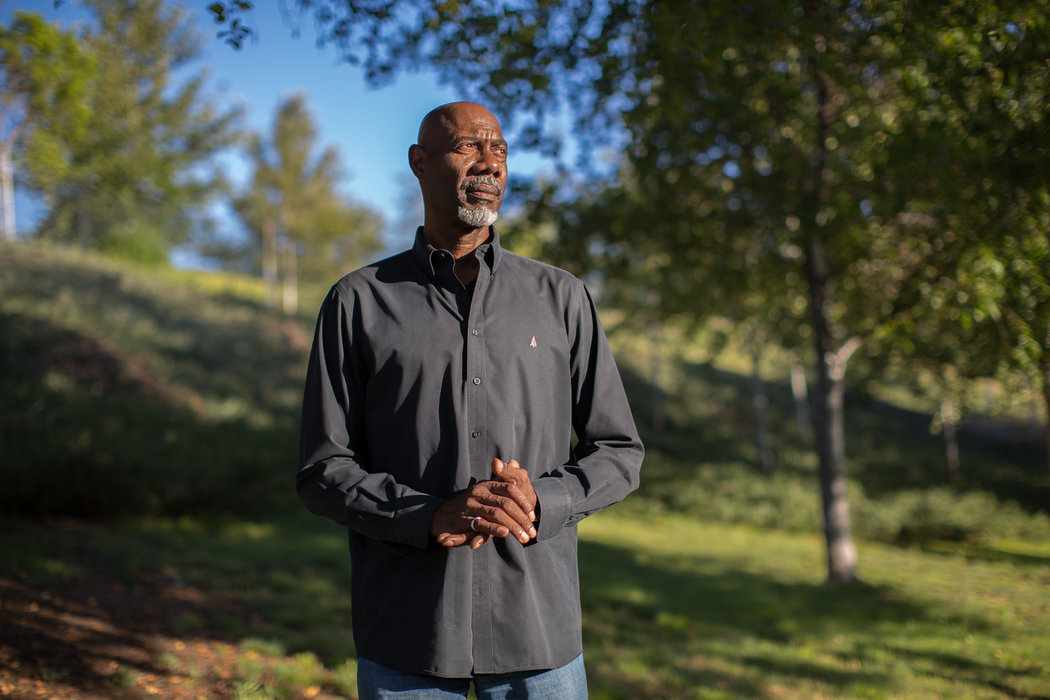 Orlando Ward near his home in Corona, Calif. He is the great-great-great-grandson of Bill and Mary Ann Hill, who ended up in Maringouin after the slave sale, and the nephew of Charles Hill. (Credit Monica Almeida/The New York Times)

I remember, when I was younger, I would ask my grandfather Remus Hill where we were from, and he would say Maringouin. When I asked, “What about before that?” he would get hesitant and very solemn and say, “I could take you back as far as Maryland, but it would make your toes curl.” He was upset by the memory. So I didn’t push him. That was not a place he wanted to go.

It didn’t knock me off my chair when I was reading the story. But I did sit up straight. I had to process it. How do you reconcile this with a faith that brought you into adolescence and one that you’re still tied to through your mom and the memory of your grandfather? That’s kind of where I am: putting the pieces together, trying to look at all sides of the equation.

Let’s jump ahead and talk about reparations. How do you really value the damage that was done in a way that’s straightforward and fair?

Everybody should have scholarships, yes. But not everybody wants to go to Georgetown. The more important thing to me is to memorialize the 272 and, at the same time, the people who sold them and the people who brought the slaves to Louisiana. What do their descendants have to say about it? I don’t know all the emotions they would go through; I can’t fully get into their shoes. But I think it’s important for both sides to be pointed out and memorialized, not villainized, to begin to build a model for healthy dialogue.

I have a 12-year-old son, and we live in a fairly diverse community where African-Americans are in the minority. He had a history project not too long ago where kids were asked to trace their families. Many of his European-American classmates could go all the way back to Ireland, England and Spain. I could take him to Louisiana, and that’s as far as I could go. As African-Americans, we’ve grown to accept that. But we’ve also known there’s another door there that we didn’t have a key to. 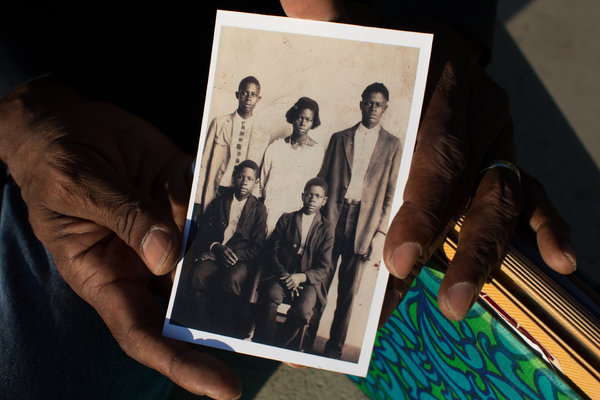 Mr. Ward holds a family photo that includes his grandfather Remus Hill, lower right. All are descendants of the Jesuits’ slaves.

Now there’s a chance to go back as far as we can so that my son can understand the circle of life. And his children will understand even more. I don’t have to watch “Roots” 150 times anymore to imagine how we could come from there to here. I have a road now that I can look at. The ultimate goal now is, gosh, can we get across the Atlantic and figure out what port in Africa we were shipped from? That’s where my curiosity has started to take me. 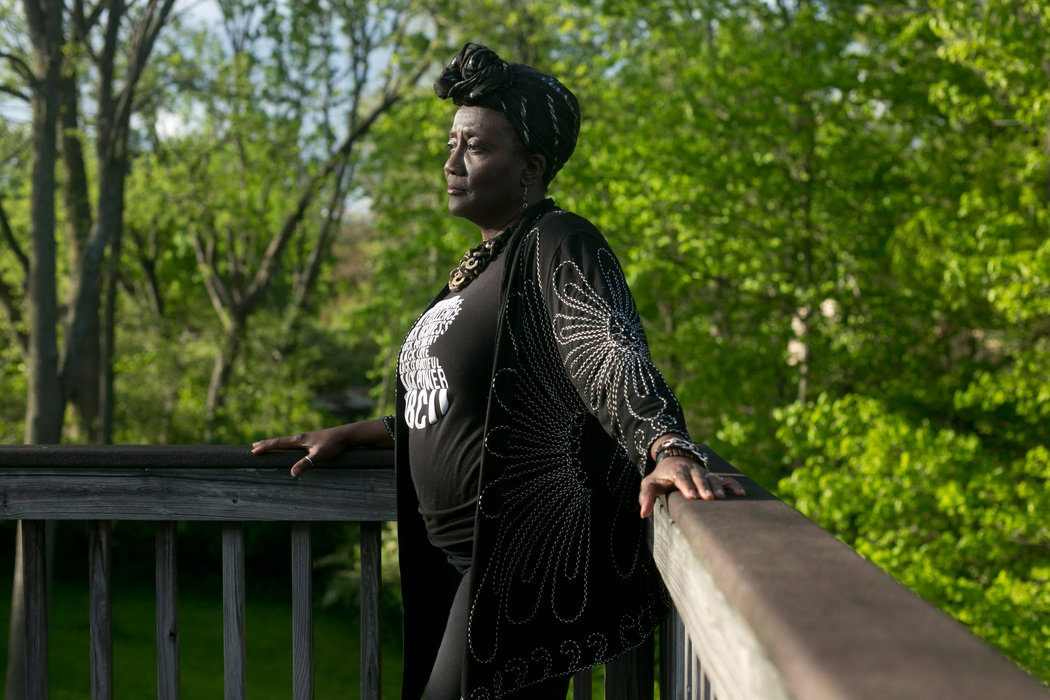 Rochell Sanders Prater is a descendant of slaves sold by Jesuit priests. Ms. Prater, born in Louisiana, said that nobody in her family really talked about slavery. (Credit Andrew Spear for The New York Times)

Rochell Sanders Prater, 55
Great-granddaughter of Jackson Hawkins, who was about 3 when his family was sold

I’m going to be honest. This came to me at the right time in my life. It’s a blessing from above for me. I’m at an age where I’m hungry to know where I came from. My grandma had always told us we were from the Eastern Shore of Maryland. But nobody ever talked about slavery in our family.
I was born in 1960. We were raised Catholic, and when I was coming up, blacks sat on one side of the church and whites sat on the other. A rebel spirit inside me said that something was wrong with that picture. How could a priest talk about Jesus’ love and split up the congregation like that? I knew something was wrong. But I didn’t know the history.

A young lady I know posted that photo of the headstone that ran with the story on Facebook. All my family is buried in that graveyard: my mom, my dad, my sister, my brother.

I thought, “That might be my family.” I couldn’t believe it. I’m still actually in shock. I have a million questions for my ancestors now.

I know some things about slavery. I know that the deeper south you went the harder it was. I did not know that my family was used as leverage to help Georgetown. I did not know that. The priests sold human beings like they sold china. That’s sinking in right now. But I’m not angry.

I trust that this is a divine intervention. It’s a gift from God that can help heal this nation. I’ve been going to meetings with a white friend of mine; we’re talking about racism and trying to bring blacks and whites together. The South African truth and reconciliation process is a model we may want to explore. I don’t want to talk anymore. I don’t want to have a dialogue about it. I want us to do something.
If you’d like more deep coverage of race and ethnicity, sign up for our Race/Related newsletter.