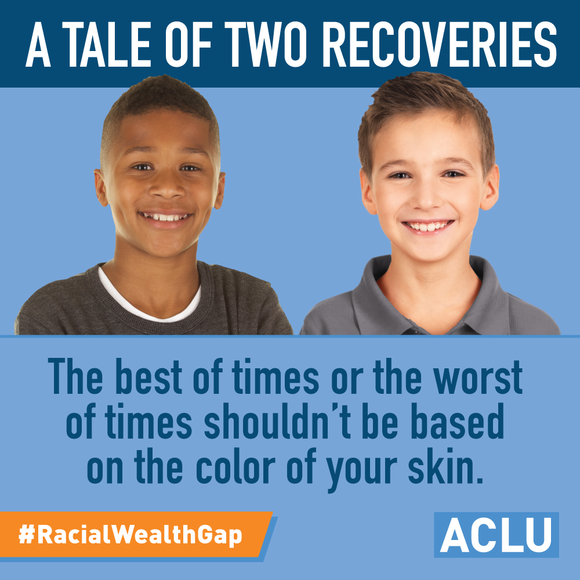 “Not only were black homeowners devastated by the housing market collapse, they are now being left behind. It is very much a tale of two recoveries,” said Rachel Goodman, staff attorney with the ACLU’s Racial Justice Program.

The study, conducted for the ACLU by the Social Science Research Council, examined data from the longitudinal Panel Study on Income Dynamics concerning black and white households that owned a home at some point between 1999 and 2011.

It explores the dramatic changes in wealth and home equity for these families over the course of that time period, and predicts how those changes might affect their children and grandchildren.

· In the recovery, race matters. All households lost wealth at the height of the housing bust and recession, from 2007-2009. But, beginning in 2009, median white household wealth stopped falling as median black household wealth continued to drop. The typical black household lost an additional 13 percent of its wealth between 2009 and 2011.

· Harms will compound and continue into the next generation. By 2031, a typical black household’s wealth is forecast to be nearly 40 percent lower than it would have been without the Great Recession. As a result, the overall wealth disparity between white and black homeowners, which had been forecast to drop to 4.0 by 2031, will instead grow to 4.5.

The study points to various factors contributing to the growing disparities, including:

· Black families had a larger proportion of their wealth in home equity before the crisis, so the plunge in housing prices hit them harder. (To date, housing prices in majority-minority zip codes have not recovered as fully as has the market as a whole.)

“This study makes clear that the devastating impact of the financial crisis on black families’ wealth will continue until policymakers address this pressing issue,” said Goodman.

· Regulate Mortgage Servicing: Government enforcement agencies should focus special attention on identifying and stamping out racial disparities in servicing practices. Policy reforms aimed at strengthening regulators or addressing abuses in the mortgage servicing industry should be specially attuned to the civil rights consequences of unequal exclusion from housing opportunity.

· Reform the Secondary Mortgage Market: Reforms should ensure that mortgage securitizers operate in a way that encourages inclusive lending and discourages discrimination by originators.

· Open Access to Credit: Policymakers should carefully monitor current lending practices to ensure that low-income and minority communities are not being unfairly denied mortgages, and to clarify that recent legislation does not support racially disparate limitations on access to credit.
“Steps can be taken right now to help close the growing racial wealth divide, and to ensure that the next generation has the benefits of assets and savings that bring a more secure future,” said Sarah Burd-Sharps, co-director of the Social Science Research Council’s Measure of America project.

More information is at: www.aclu.org/report/tale-two-recoveries-economic-recoveries-black-and-white-homeowners

The report is at: www.aclu.org/files/field_document/discrimlend_final.pdf