An all-Asian cast and no martial arts: Why the ‘Crazy Rich Asians’ movie matters

IMDiversity 4 years ago Comments Off on An all-Asian cast and no martial arts: Why the ‘Crazy Rich Asians’ movie matters 2 K

Being Chinese American, I grew up watching movies and TV shows with characters who looked like me but didn’t act like me.

One of them was Lawrence, the nerdy Chinese student in the 2003 film “School of Rock.” He was bespectacled, soft-spoken and insanely good at the piano.

Another was Lucy Liu’s character Joan Watson in the popular CBS crime procedural “Elementary.” Before becoming a detective, she was the star of her class in medical school and had a career as a surgeon.

And I can’t forget Ang Lee’s epic 2000 film “Crouching Tiger, Hidden Dragon.” It was the first movie with an all-Asian cast that I watched. Every character seemed to be a martial arts master.

As I kept seeing these characters, I became more acutely aware of how I didn’t fit those molds, as defined by Western pop culture. I was so bad at piano my teacher recommended I quit. I almost fainted in AP biology when I had to dissect a cat, and I have never once attempted to learn a martial art. I’m a journalist.

Now the movie I have wanted my whole life has arrived — or, at least, the preview has.

The trailer for “Crazy Rich Asians,” based on a book of the same name by Kevin Kwan, was released Monday [April 23rd]. I’ve watched it more than 10 times already.

It’s loaded with Asian actors. In fact, it’s the first major Hollywood production that isn’t a period piece to have an all-Asian cast in 25 years. It’s a love story. Think an Asian version of “Meet the Parents,” except the main antagonist is an ultrarich mother who has mastered the disdainful side-eye.

Most important, it’s an entire movie about Asians without martial arts or stereotypical nerds.

From what I can tell, based on the book and the trailer, this is an event I’ve been waiting for: a film with Asian characters who are more like me.

Directed by Jon M. Chu, the Warner Bros. film follows an economics professor named Rachel Chu, an American-born Chinese (or “ABC,” as we Asians like to say,) as she accompanies her longtime boyfriend, a fellow professor, to Singapore for a wedding and to meet his family. Unbeknown to Rachel, her boyfriend, Nick Young, is from one of the wealthiest families in Singapore, making him, well, crazy rich. Rachel is thrust into the exclusive world of old money and must face all the obstacles that come with dating “the Prince Harry of Asia.”

Many Asian Americans, myself included, see this movie as so much more than your average popular chick-lit turned rom-com. Entertainment reporter Ashley Lee called the film “a pipe dream come true,” and others have hailed it as “a historic moment for Asian Americans.”

a studio movie with an all-Asian cast, none of whom are doing any martial arts moves or leaning into subservient stereotypes but instead are t h r i v i n g in designer decadence and universal attractiveness, is a pipe dream come true. HERE FOR THIS, #CrazyRichAsians!! https://t.co/xOnO936meR

Pulled over in a shady part of burbank in 80 degree heat to watch #CrazyRichAsians trailer. This is a historic moment for Asian Americans and I could not be happier. Whatever happens, we’ve already won. Thank you @jonmchu @wbpictures

While watching the trailer, I experienced something new. I looked at Rachel, played by Asian American actress Constance Wu of ABC’s “Fresh Off the Boat,” and completely related to her.

In the trailer, Rachel’s friend Goh Peik Lin (played by Asian American rapper Nora Lum, who goes by Awkwafina) tells her that Nick’s mother “just thinks you’re some, like, unrefined banana. Yellow on the outside, white on the inside.”

The term “banana” can be used in a derogatory way to describe Asian Americans who are thought to have “lost” their Asian heritage and behave in a stereotypically white way. I don’t agree with the use of that term to describe a person, yet I can sympathize and identify with someone who has been called this. 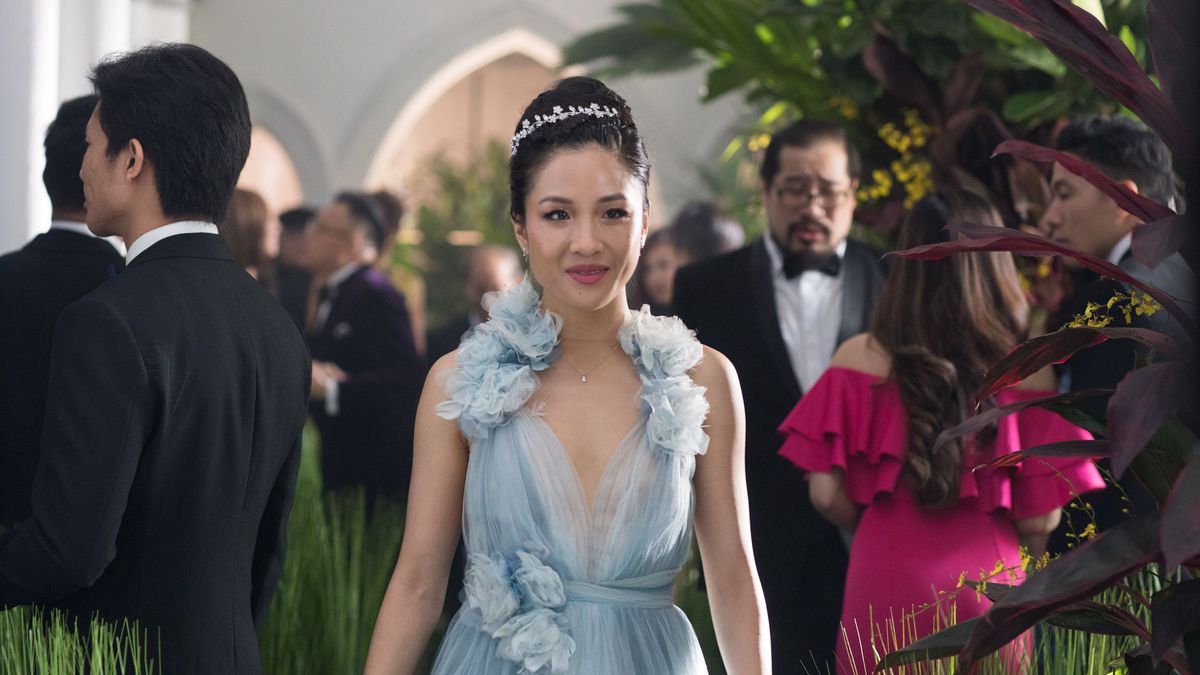 My parents have jokingly called me a “banana,” like when I forgot how to write my name in Chinese — in my defense, it has more than 50 strokes (趙馨興) — or when I held my chopsticks like a pencil.

Growing up in Guam, a U.S. territory, I always felt more American than Chinese. I spoke English at home. My family didn’t own a rice cooker until I was in high school. When we finally got one, it was a Black & Decker that made only two cups at a time.

Nick’s mother was attempting to insult Rachel for her American traits. But when I’m teased by my parents for my cultural faux pas, I don’t feel as though I’ve abandoned my heritage. Rather, it’s a product of my identity being a mix of Asian and American. I’m fluent in Mandarin, and I always take my shoes off before entering a home, but I grew up listening to the Backstreet Boys, and Chinese food isn’t even my favorite Asian cuisine.

I developed an attachment to Rachel’s character long before I even knew there was going to be a movie. Not only is she a rare Asian American female protagonist, her character is complex. She’s multidimensional and embodies a host of relatable Chinese and American traits. She’s real, not some caricature, and in this film, she’s the star.

[Meet the cast and characters of “Crazy Rich Asians”]

When I viewed the trailer, I saw for the first time in my memory a female lead with whom I shared not only my appearance but my experiences.

Take the scene in which Rachel is offered fragrant water in a delicate green glass bowl. It’s meant for hand washing, but she tries to drink it. That was familiar to me. One of my first times eating at an upscale Chinese seafood restaurant, I was puzzled when people started plunging their hands into individual porcelain bowls of lemon water that were brought to the table after the crab course was served. I, too, thought it was for drinking. My mom had to explain its purpose. But to this day, the idea of washing my hands in a bowl at the table strikes me as odd. I’ll take a moist towelette, please.

Beyond the confusion over finger bowls, Rachel’s difficulty developing close relationships with people who share her ethnicity, but not her experiences, is something many Asian Americans, myself included, can relate to.

A majority of my extended family lives in Hong Kong. Unlike Rachel, who makes her first trip to Asia in the film, I’ve had the opportunity to visit Hong Kong on numerous occasions. I spent the entire summer of 2015 working there and living with my family. But the Asian metropolis is nothing at all like the sleepy island community I grew up in and is not somewhere I feel at home.

My Hong Kong relatives are wealthy. I don’t know whether they’re wealthy like the film’s Young family, but they’re barbecues-with-Kobe-beef wealthy. During that summer, I felt like Rachel while I navigated life in Hong Kong’s high society. Once my aunt offered to pick me up from work because she happened to be near my office. She showed up in a chauffeured car. Many times after eating dinner at my grandmother’s house I would stand up and try to take my dishes into the kitchen, only to be told to let the maid do it. It’s not that my extended family didn’t do everything humanly possible to make me feel welcome and loved. But their lives were just so different from what I was used to. In Hong Kong, I was surrounded by millions of other Chinese people and my family, yet I still felt foreign.

This feeling of being a stranger in my ancestral country stems from the fact that the Asian American experience is not the same as the Asian experience. Through the all-Asian cast who portray distinct characters, each with their own complex personalities and cultural backgrounds, this movie tries to explain that to a worldwide audience.

Fortunately in #CrazyRichAsians, some characters are rich, some crazy, some crazy rich, some none of the above—and all are different and distinct.

It’s such a luxury to have a film where stereotypes AREN’T the only way we’re depicted onscreen. An all-Asian cast shows the way. https://t.co/qoM5sp2f2s

Aside from featuring a diverse group of characters, the movie’s cast is also made up of Asian actors and actresses from a variety of countries, including Malaysia, Australia and Singapore.

In a 2015 interview with the Hollywood Reporter, the book’s author, Kevin Kwan, said he hoped the film would have “equal representation in terms of Singapore stars, Hong Kong stars, Asian American stars, mainland Chinese stars.”

“I would love for it to be like a dream team cast,” Kwan said.

Jon M. Chu, the director, tweeted that he planned to have “amazing Asian actors cast in EVERY SINGLE ROLE.”

I would say Kwan and Chu got what they wanted.

But this movie shouldn’t be seen as the solution to all of Hollywood’s representation problems, and it even struggles with its own diversity and inclusion issues.

Trust me, I really, REALLY, want to like "Crazy Rich Asians." But you know how we complain about those movies with an all-White cast except for the one token Black character? I'm afraid "Crazy Rich Asians" is like that: an all-East Asian cast with one token brown Asian. 🤷🏽‍♂️

It is a step in the right direction for Hollywood, long criticized for “whitewashing” Asian characters or not casting Asians in leading roles. (Remember the uproar when Emma Stone was cast as the part-Hawaiian, part-Chinese female protagonist in “Aloha”?)

This movie gives me hope. Maybe I’ll start seeing more major movies with people who look like me and act like me. Maybe, just maybe, my pipe dream of a contemporary movie about a Chinese American female journalist isn’t so crazy after all.

Allyson Chiu is a reporter with The Washington Post’s Morning Mix team. She has previously contributed to the South China Morning Post and the Pacific Daily News. Allyson graduated from Northwestern University in 2018 where she studied journalism and integrated marketing communications.