Critics say forthcoming film The Great Wall is just the latest example of Hollywood putting a white person in a role that should go to a person of color. 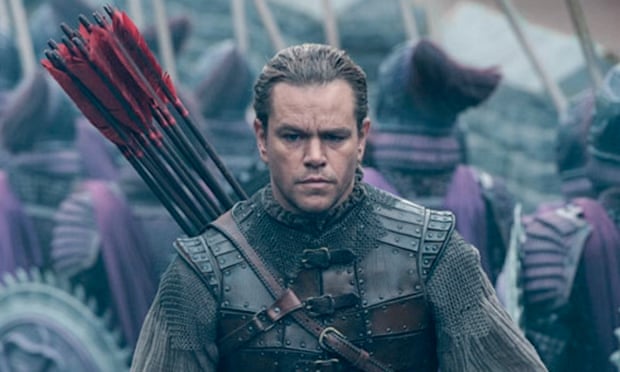 Great Wall of Outrage: one blogger called the film ‘the latest in the grand cinematic tradition of the Special White Person’. Photograph: Supplied

A chorus of outrage followed the release of the first trailer for The Great Wall, a fantasy adventure set in China more than 1,000 years ago, which stars the white Hollywood star Matt Damon in the lead role.

Damon plays a soldier in ancient China in The Great Wall, an English-language film directed by Zhang Yimou and set for release in February 2017.

Constance Wu, a star of the comedy show Fresh off the Boat, posted a statement on Twitter that lambasted the “racist myth that [only a] white man can save the world”.

The popular blog Angry Asian Man called the movie “the latest movie in the grand cinematic tradition of the Special White Person”, adding: “You can set a story anywhere in the world, in any era of history, and Hollywood will still somehow find a way for the movie to star a white guy.”
In her post, Wu wrote: “Our heroes don’t look like Matt Damon. They look like Malala. Ghandi. Mandela. Your big sister when she stood up for you to those bullies that one time. We don’t need salvation. We like our color and our culture and our strengths and our own stories.”

The Taiwanese American actor criticized various justifications for the paucity of starring roles for Asians in Hollywood.

“Money is the lamest excuse in the history of being human. So is blaming the Chinese investors,” she wrote.

“Remember, it’s not about blaming individuals … Rather, it’s about pointing out the repeatedly implied racist notion that white people are superior to POC [people of color] and that POC need salvation from our own color via white strength.”

1700 years to build, just for Matt Damon to come save it. How problematic is #TheGreatWall? https://t.co/nlbpWZMz59 pic.twitter.com/H859ydTFaN

Damon is by no means the first white actor to star in a role that might be expected to go to an Asian or Asian American actor, but the release of The Great Wall comes at a time of increasing anger with the lack of representation of Asian characters in popular culture – and the lack of roles for Asian actors.

…why would white men need to be in a movie about the Great Wall, even if it's a monster movie?

Scarlett Johansson’s casting in a remake of the Japanese anime classic Ghost in the Shell and Tilda Swinton’s casting as the originally Tibetan Ancient One in Doctor Strange both drew accusations of Hollywood “whitewashing”.

Other recent instances of whitewashing include Emma Stone’s role as Allison Ng in Aloha, Rooney Mara’s role as Tiger Lily in Pan, and the entire cast of Gods of Egypt.

Actors and audiences have increasingly voiced their frustration with the casting practices on social media. In May, comedian Margaret Cho launched the hashtag #WhiteWashedOut.

Not a sidekick. Not a sidechick. #whitewashedOUT

The project #StarringJohnCho was launched with photoshopped movie posters featuring the Asian American in starring roles, with hopes of changing the conception of who can star in blockbusters.

John Cho as Mark Watney in The Martian? I'd see it! #StarringJohnCho pic.twitter.com/LISXm8qQWy

In her statement on Twitter, Wu reflected on the importance of representation for people of color in Hollywood stories.

“Why do you think it was so nice to see a nerdy white kid have a girl fall in love with him? Because you WERE that nerdy white kid who felt unloved. And seeing pictures of it in Hollywood’s stories made it feel possible,” she wrote.

“Hollywood is supposed to be about making great stories. So make them.”

Read more on this topic:  Matt Damon and The Great Wall: the latest targets of whitewashing on film