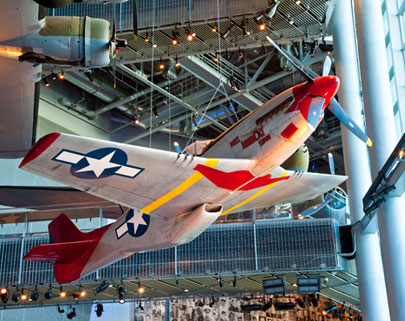 Replica P-51 Mustang to be replaced

NEW ORLEANS (April 11, 2016) – In conjunction with the special exhibit Fighting for the Right to Fight: African American Experiences in World War II, The National WWII Museum is welcoming an authentic, newly restored P-51D Mustang fighter to Museum grounds, replacing a replica P-51 in US Freedom Pavilion: The Boeing Center.

The warbird, which is painted in the likeness of the 332nd Fighter Group’s Red Tail plane flown by Tuskegee Airman Roscoe Brown, will be unveiled during a special dedication ceremony on April 21.

Hosted by ABC’s “Good Morning America” anchor Robin Roberts and WWL-TV anchor Sally-Ann Roberts, the ceremony will begin at 6:00 p.m. and feature Tuskegee Airmen George Hardy and Charles McGee. The hosts, whose father Colonel Lawrence Roberts was a Tuskegee Airman, will lead discussions with Hardy and McGee as they share their experiences flying iconic Red Tails and the lasting legacy of America’s first black fighter pilots.

At the dedication event, and throughout the following weekend, visitors will have the opportunity to view the P-51 up close on the ground floor of US Freedom before the plane is suspended from the ceiling.

The aircraft, which was restored by Flyboys Aeroworks based at Gillespie Field in San Diego, emerged as a key element of Allied air superiority during World War II.

The Museum’s P-51 Mustang will be suspended from a high ceiling in US Freedom Pavilion on April 25, where it will remain on permanent display with other WWII aircraft. The warbird’s restoration was generously supported by the Ricketts Family, including Museum Trustee Todd Ricketts.

“P-51 Mustangs were essential to the Allies gaining control of European airspace,” said Tom Czekanski, the Museum’s senior curator and restoration manager. “The P-51 provided US Army Air Forces with a high-performance, high-altitude, long-range fighter that could escort heavy bomber formations to Berlin and back. With American pilots including Tuskegee Airmen at the helm, American forces were able to dramatically reduce the loss of bomber crews, which they had been suffering since the daylight bombing campaign began in 1942.”

The success the Tuskegee Airmen achieved in battle became a symbol of bravery and skill, helping refute notions that African Americans were inferior performers in the military, especially in roles requiring advanced training.

As the Airmen became well known for their stellar flying record and distinctive aircraft, they were able to begin breaking racial barriers abroad and eventually at home.

The Museum’s P-51 dedication event will be preceded by a free Fighting for the Right to Fight Symposium, which will include two panel discussions featuring noted historians and veterans focusing on African Americans in the military.

The morning panel, featuring John Morrow, PhD, and Dan Haulman, PhD, among others, will examine the evolution of black servicemembers and recognition throughout the 20th century.

The Tuskegee Airmen participating in the dedication ceremony will also share their stories via a free webinar at 12 noon CST on April 21.

The webinar will broadcast live in classrooms across the nation, allowing students to hear firsthand accounts of the extraordinary achievements of African Americans during the war, both overseas and on the Home Front. Students will have the opportunity to ask the veterans and Museum educators questions throughout the program.

NOTE: Registration is at capacity; no more RSVPs will be accepted. However, free livestream broadcasts of both Symposium sessions are available without RSVP—please join us online!

Fighting for the Right to Fight is on display at the Museum through May 30, 2016. Following Memorial Day, the exhibit will embark on a two-year national tour, expanding access and educational opportunities across the country as part of a robust touring-exhibit program sponsored by the New Orleans-based Museum and its partners.

The National WWII Museum tells the story of the American experience in the war that changed the world – why it was fought, how it was won, and what it means today – so that future generations will know the price of freedom, and be inspired by what they learn. Dedicated in 2000 as The National D-Day Museum and now designated by Congress as America’s National WWII Museum, it celebrates the American Spirit, the teamwork, optimism, courage and sacrifice of the men and women who fought on the battlefront and served on the Home Front. For more information, call 877-813-3329 or 504-528-1944 or visit www.nationalww2museum.org.