Prepare now to join the digital workforce before the arrival of the robotic overlords.

As workers, we have many job-related rights. What we don’t have is the right of continued employment. Whether that should change is another topic. But what we do have is the desire to better ourselves and be forward thinking.

It doesn’t take much forward thinking to realize that today’s jobs are becoming automated. Robots? Check. Artificial intelligence combined with Internet of Things devices? Check. They are coming and in ways we never thought possible ten years ago. Who would have thought we’d be talking to chat boxes for customer service for example.

In general, automation is riding a wave as employers perceive better productivity and lower costs as benefits. Does this move toward a digital workforce mean fewer jobs? Leading economists argue the opposite, that automation will actually increase jobs. 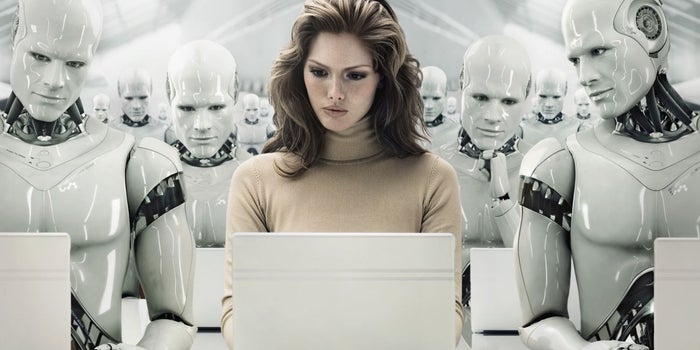 Economists point to history to show that automation actually creates jobs. As odd as it sounds, as automation speeds up a task, humans come in to do the surrounding tasks that have not been automated. For example, in the 1920’s when automation helped increase cloth weavers’ production by 50 perfect, the price of cloth went down increasing demand which in turn increased the number of weavers needed.

A more recent example would be in the banking industry with automated teller machines (ATMs). When ATMs came into use, the number of bank tellers in 1988 was 20 per branch. This fell to 13 per branch in 2004. However during that same period, banks opened up 43 percent more branches and the overall number of bank-teller jobs increased.

Millennials, Baby Boomers — we are all at risk.

It doesn’t really matter your age or career stage, you are in to be impacted. An estate planning attorney who, for the last 20 years, successfully ran his own practice can suddenly find that an app replaces his services. A young mechanical engineering graduate may find jobs scarce due to advances in CAD and 3D printing. In fact, the coming wave of robots, cognitive computers and artificial intelligence can impact blue and white collar jobs equally.

What is different than in the days of weavers and ATMs is that the jobs required now and in the future require higher level skills. If an argument is to be made against digital transformation, it is that the divide between high-level skills and low-level skills will become wider with little or no middle ground.

It doesn’t help to dwell on it without taking any action. What sets you apart is what you are willing to do about it.

Ask for job training in a new area.

Your current employer is probably thinking about ways to increase productivity through automation. One of the first things (hopefully) they are thinking about is the kind of skills that they need. Talk to your manager, HR and IT to see what is happening. Find out if they plan to offer job training to transition valuable workers to new skills. If they are not, that may be a sign for you to look elsewhere soon.

Get trained in an area that interests you.

Doctors and nurses are required to attend courses to stay up to date in the medical field, yet for some reason, most other jobs don’t have that requirement. But there are community colleges and online courses that can provide you with the skills that will be in demand at your place of employment or elsewhere.

Perhaps you are interested in gadgets and can learn about how robots work and how they are being used to automate repetitive steps in manufacturing. It might inspire you to use robots in your work.

Be the person who starts a digital initiative.

Perhaps your current role gives you an inside perspective on how things could be more efficient if only, if only….(fill in the blank). Research what it would take to implement your idea and suggest it. Be politely persistent if your immediate manager is cold to the idea and take your ideas to higher levels.

At worst, you will be recognized as someone with forward-thinking ideas and someone who is ready to adapt. At best, you actually get to implement your idea, proving your digital aptitude and penchant to be part of the digital transformation.

Are you the person always trying new things and trying out new gadgets? Lead a lunch session to introduce new digital things to your colleagues. Getting used to new things, to constant change not only stimulates the mind but it also prepares people to accept new processes and to think about how to apply the concepts into their own daily work.

In many cases, automated processes and humans can co-exist. The main reason for robotics is that it can do things better than humans. Robots are especially good at repetitive actions — they don’t get tired and make mistakes. They are also good at doing two different things at once where correlations can be observed. But, embrace it because they are doing the boring stuff, freeing you up to do the more fulfilling work.

It’s natural to be a bit nervous of where all this technology is going to take us and the impact it will have on our careers, whether we are just embarking on a career or well entrenched in the working world. After all, researchers predict there is a 50 percent chance that machines will be capable of taking over all human jobs in 120 years. The same article has some startling predictions of what will happen within the next ten years.

But knowledge is power and taking proactive steps to ensure your skill set matches what is needed in the future can give us a sense of control. You might find a new exciting career in the process.