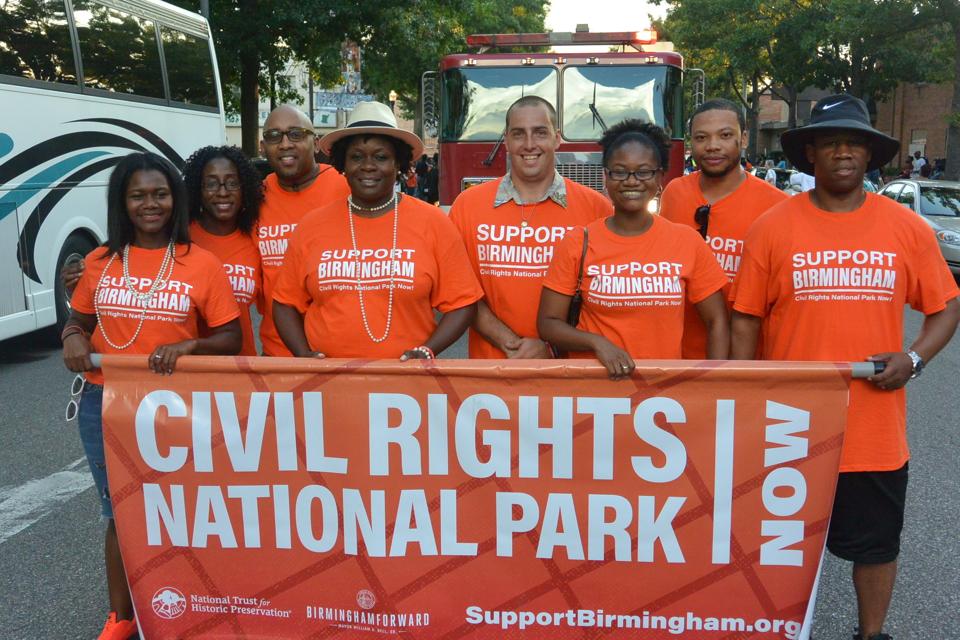 The start of the Civil Rights Park March

President Obama, you are on the clock.

Before the President leaves office in January, one of the many items on what is surely a long, exhaustive please-do list is to use the last days of his executive powers to create a Civil Rights National Park in Birmingham.

There are myriad reasons for him to do so, reasons that were well articulated just a few months ago by my colleague John Archibald. From my perspective, this is simple because, frankly, America would not be America–the good, the bad and even the Oh, Jesus–without Birmingham, and the sacrifices made here by countless men and women, most of whom will never have a monument erected in their honor.

One thing I have learned in my short time here is that beyond the many, many living breathing Civil Rights soldiers and witnesses–some of whom played large roles in the struggle, and some of them small–beyond the buildings, streets, nooks and crannies where real history occurred, America’s civil rights history is always right around the corner. No matter where you’re standing.

When people from up yonder come here for the first time, they’re surprised to know that the 16th Street Baptist Church where the “four little girls” were murdered by racists; Kelly Ingram Park, where children were fire-hosed and besieged by police dogs; the AG Gaston Motel, where Rev. Martin Luther King, Jr. and others rested their heads weary from the struggle; and even the building that housed Mr. Gaston’s bank and main office, where he was sitting as he learned of the police attacks on children that were going on right outside his window–all of these historic locales are within a few steps of each other.

And, oh, that they’re also nestled right next to the Birmingham Civil Rights Institute, where the remnants of our nation’s struggle reside in clear, profound and powerful abundance.

It should be the biggest no-brainer.

The effort to obtain the designation is spearheaded by Rep. Terri Sewell, who has authored legislation she hopes will pass through Congress–ummm, okay–and leads efforts to persuade Obama to declare the park by executive order.

“We’re trying to pursue both paths,” said Birmingham Mayor William A. Bell, Sr. “and we’re hoping it happens before December because after January…”

After January, everything hits reset, no matter which Presidential candidate backs her or his moving truck up to the White House.

On Sunday, hundreds of people from throughout the city gathered in the Civil Rights district, lending support to the effort by participating in a brief march and enjoying a concert by popular artist Ledisi.

America would not be America–the good the bad and even the Oh, Jesus–without Birmingham

Prior to the march, Bell, Sewell and several members of the city council addressed the crowd that had gathered on 16th Street, just in front of the Institute.

“We want to make sure we preserve this history for future generations,” Sewell said.

“This is hallowed ground for the children who gathered here to say, ‘No longer” to the injustices taking place here and throughout the nation,” added Bell.

Mayor Bell likened the National Park efforts to the sacred 12 stones representing the 12 tribes of Israel. “Those are the twelve stones of their people,” he said. “We must preserve these stones as well.”

Among the final speakers was Odessa Woolfolk, one of those walking, breathing witnesses I spoke of. In 1963, the year Birmingham led America out of its dark past, she was a school teacher, assigned by the authorities to prevent the children in her classroom from leaving school early to participate in the protests, marches and lunch-counter sit-ins.

She demonstrated how she turned her back in the classroom so the students could leave. “I just kept thinking,” she said, “why don’t they just get on outta here!”

Woolfolk added that she was in Washington, D.C. for the famous March on Washington, which took place exactly 53 years to the day from just this past Saturday. She had been on vacation in New York and thus took a bus, rented by the NAACP, to the nation’s capital from the nation’s largest city.

She said when the delegation from Birmingham arrived and settled into the crowd gathering before the Lincoln Memorial, a speaker from the podium announced: “Birmingham is here!”

It prompted a long and loud ovation of recognition and appreciation from all who had gathered on that historic day.

Now, it is time for just one man to applaud our city with the stroke of a pen creating a Civil Rights National Park in the only place in the nation where it could ever be.

The clock is ticking.

If you’d like to sign the petition in support of the effort to create a Civil Rights National Park in Birmingham, go here.