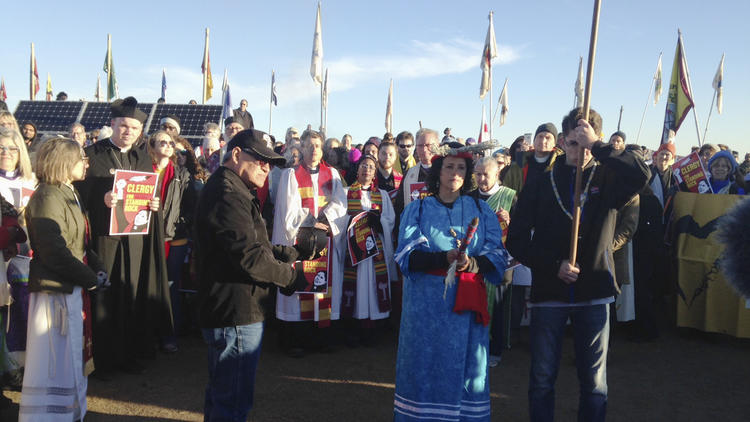 Members of the clergy join protesters against the Dakota Access oil pipeline in southern North Dakota near Cannon Ball on Thursday, Nov. 3, 2016, to draw attention to the concerns of the Standing Rock Sioux and push elected officials to call for a halt to construction. The tribe says the $3.8 billion, four-state pipeline threatens its drinking water and cultural sites. (James MacPherson / AP)

The interfaith event was organized to draw attention to the concerns of the Standing Rock Sioux and push elected officials to call for a halt to construction of the $3.8 billion pipeline that’s to carry North Dakota oil through South Dakota and Iowa to a shipping point in Illinois. The tribe believes the pipeline that will skirt its reservation threatens its drinking water and cultural sites. 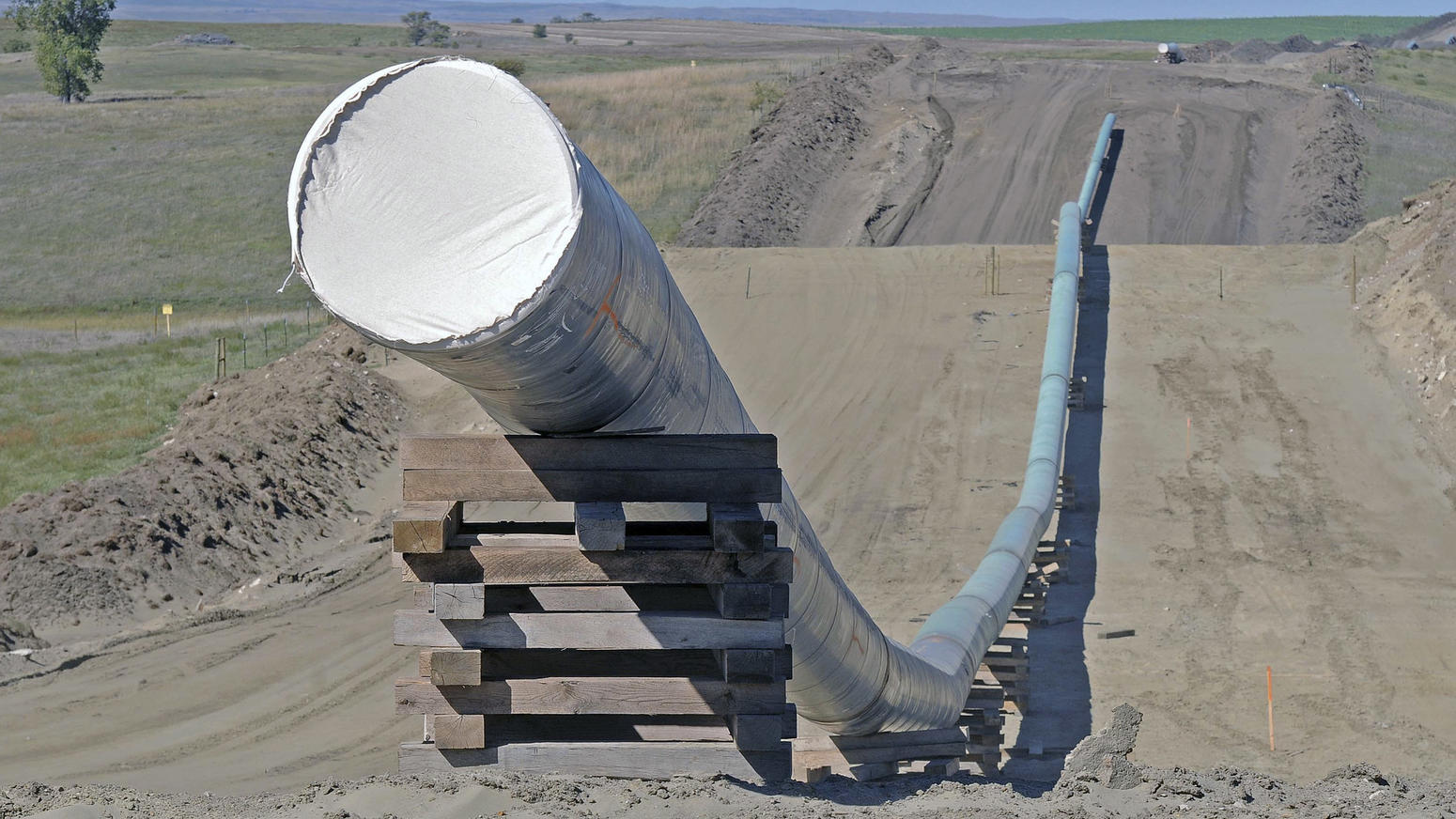 A section of the Dakota Access Pipeline that is under construction on Sept. 29, 2016, near the town of St. Anthony in Morton County, N.D. (Tom Stromme / The Bismarck Tribune)

The pipeline “is a textbook case of marginalizing minority communities in the drive to increase fossil fuel supplies,” the Rev. Peter Morales, president of the Unitarian Universalist Association, said in a statement. Morales’ group sent more than 30 clergy to the event.

More than 500 clergy from around the world gathered with protesters on Thursday at a campfire at the main protest camp to burn a copy of a religious document from the 1400s sanctioning the taking of land from indigenous peoples. About 200 people then sang hymns while they marched to a bridge that was the site of a recent clash between protesters and law officers. Some held signs that read, “Clergy for Standing Rock.”

Watch video: The Dakota Access pipeline protests by the numbers

The Rev. Tet Gallardo, a Unitarian Universalist minister from the Philippines, said she was “moved to come” to the gathering.

“Water is the subject of concern also in the Philippines,” she said. “How can this happen to people who are so faithful to God?”

The group sang and prayed while gathered in a semicircle at the still-closed bridge while law officers monitored from vehicles at a barricade on the other side, from surrounding hillsides and from a helicopter flying overhead.

John Floberg, an Episcopalian minister from the Standing Rock Reservation who organized the event, called for “peaceful, prayerful, nonviolent and lawful activity here.” There were no immediate confrontations between group members and authorities, and no arrests, Morton County sheriff’s spokesman Rob Keller said.

Later Thursday, 14 protesters were arrested in the judicial wing of the Capitol in Bismarck. Highway Patrol Lt. Tom Iverson said the protesters were sitting, chanting and singing and refused orders to leave. Three other people who refused orders to leave the governor’s residence on the Capitol grounds were also arrested. Iverson said the 17 individuals face criminal trespass charges in Burleigh County.

The demonstrators were singing hymns Thursday afternoon in the judicial wing of the Capitol. Highway Patrol Lt. Tom Iverson says they face disorderly conduct charges for refusing to leave when asked. 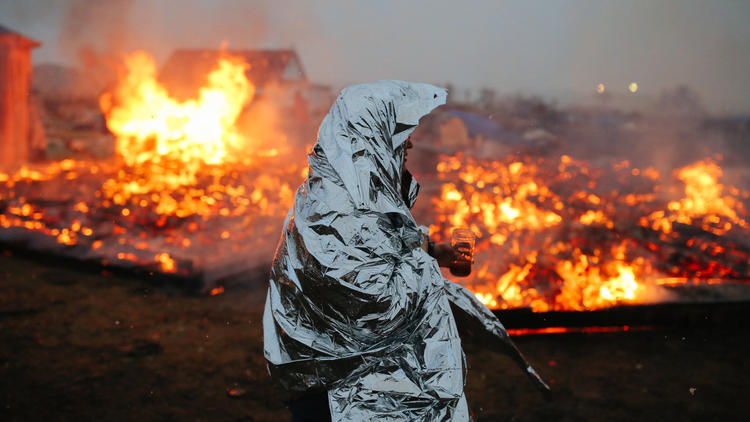 Jennell Downs, with the Kickapoo Tribe of Oklahoma, puts up a flag at the State Capitol in Oklahoma City during a protest against the Dakota Access Pipeline, Monday Oct. 31, 2016. (Steve Gooch / AP)

Their protest followed an interfaith day of prayer in the southern part of the state near the small town of Cannon Ball. Hundreds of clergy sang hymns and marched near the route of the pipeline.

Members of the Standing Rock Sioux have demonstrated against the pipeline for months, saying they fear it could harm drinking water and construction could damage sacred sites.

Opponents of the pipeline project have been camped near the route in southern North Dakota for months in an effort to stop construction. Clashes between protesters and police have resulted in more than 400 arrests since August. 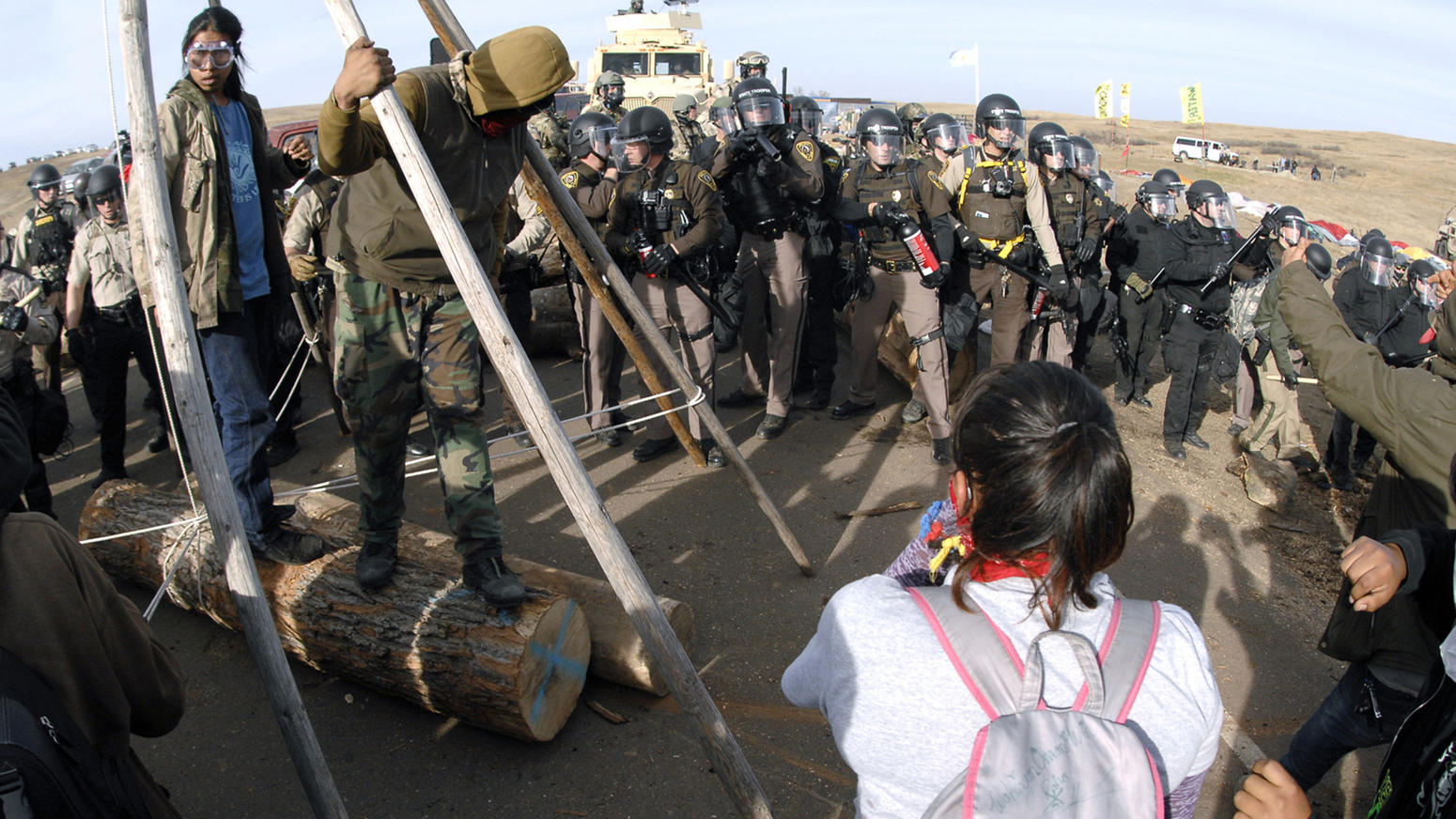 Protesters in the left foreground shield their faces as a line of law enforcement officers holding large canisters with pepper spray shout orders to move back during a standoff in Morton County, N.D. (Mike McCleary / AP)

The most recent incident came Wednesday, when law officers in riot gear used pepper spray to deter dozens of protesters who tried to cross a frigid stream to access property owned by the pipeline developer. Two people were arrested. About 140 people were arrested on the property last week in a law enforcement operation that cleared the encampment that protesters had established on the land.

Texas-based developer Energy Transfer Partners has said the 1,200-mile pipeline is largely complete outside of the area in south central North Dakota where it will go under Lake Oahe, a large Missouri River reservoir and the source of the tribe’s drinking water. The federal government in September ordered a temporary halt to construction on Army Corps of Engineers land around and beneath the lake while the agency reviews its permitting of the project. There’s no timetable for a decision.