Black women continue to be sorely underrepresented in leadership roles in corporate America. Currently, they make up 12.7% of the U.S. population, yet they represent only 1.3% of senior management and executive roles of S&P 500 firms, 2.2% of Fortune 500 boards of directors, and in a post-Ursula Burns world, there is not a single black female CEO in the Fortune 500.

Despite this underrepresentation, a small subset of black women have found success as leaders and played key roles in driving organizational change. We conducted in-depth interviews with 59 black women executives who have occupied senior-level positions in U.S. corporations. We sought to understand the barriers they faced, their strategies for ascending through the organization, and the tools they used to manage significant organizational change efforts and navigate career risks.

We conducted interviews around the years 2007 and 2014 — one year before and 6-7 years after the global financial crisis, when many businesses faced new challenges. The Black female leaders we interviewed were all within four levels of the CEO (e.g., chief marketing officer, senior vice president) during the first interview and 51% were still at that rank or higher during the second interview. The women led companies in various industries including financial services, consumer products, and healthcare.

Our findings indicate that one main driver of their success was their ability to navigate the challenge of intersectional invisibility, or the tendency to be overlooked, disregarded, or forgotten due to one’s status as a member of two underrepresented and devalued groups. We uncovered that the women we interviewed combatted this by taking on visible, high-risk roles that helped them ascend to the upper echelons of their companies.

There is an ironic complexity to these women’s experiences: they feel physically visible yet cognitively invisible. In other words, their underrepresentation makes black women highly visible in their workplaces. As Tara (Executive Vice President, consumer products) told us, “You stand out more. You are the only one in the room.” (To protect our interviewees’ privacy, all the names in this article are pseudonyms.)

Yet, at the same time, many of our participants expressed feeling invisible. For example, one woman said, “I’m the best choice for this job, and I’m probably not on your radar screen.” And Deana (President, consumer products) recalled a time when her subordinate was invited to her boss’s house for dinner — but she wasn’t: “I’m reporting to this person, I live maybe two miles away, three or four miles, never invited to their home. Never invited to their home and others were, including someone who reported to me, who I put in the job, a white male.” 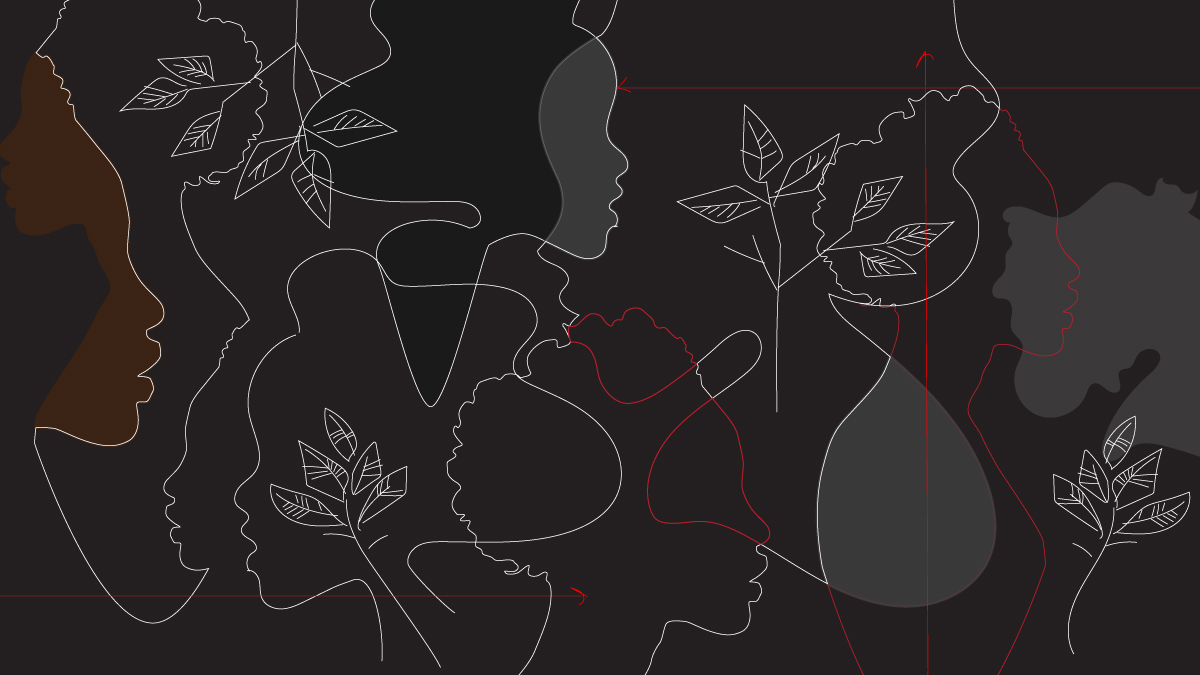 Almost all of the executives we interviewed spoke of having to adapt to this invisibility, and they employed different strategies based on their career stage. For example, the women acknowledged that earlier in their careers, they had to develop greater self-awareness to recognize when they were visible and invisible. By mid-career, they started strategically taking on risky assignments to become more visible. And by the time they became executives, they focused more on making a meaningful impact in their organizations, their communities, and supporting junior employees.

The women told us that, as they first grappled with feeling both visible and invisible at work, they developed a keen awareness of their unique, albeit disadvantageous, position. Many women reported being overlooked consistently. For example, Michaela (Managing Director, financial services) noted, “when you have a boss who really gives you no airtime, cancels every meeting, [it] doesn’t give you a sense of belonging.” Many others came from privileged backgrounds and were surprised to have been excluded because of their race and gender. For example, Selena (Senior Vice President, financial services) noted an incident from early in her career: “that was my first slap in the face from a career perspective… I could run the numbers and do the whole deal… And they’d say, ‘yeah, she’s smart but we don’t want her on our deal.’”

Despite this, these women were resilient and learned to craft their professional identities to align with others’ expectations for potential leaders. This often meant scrutinizing their appearance, style, and character, and carefully constructing professional images to help them “blend in” and disconfirm negative stereotypes. As Kit (Managing Director, IT) explained, “I think for black women… we have to have the right balance of being friendly and nice but not having that be viewed as soft and sexy. I don’t even have the right adjectives to use to really describe this balance that is required for us. Not edgy but not without edge; soft but not too soft.”

Another executive walking the tightrope of managing her underrepresented identity, Mara (SVP, Pharmaceuticals), told us, “I was black, they were white…I was female, they were all male…There was nothing that was an obvious similarity between us. I think I spent my early years trying to mask how different I really was…every Sunday night I would memorize sports scores…in case I found myself having to talk to somebody about something I didn’t care a thing about.”

Of course, in trying to mask their gender and race, many leaders felt a diminished sense of authenticity that became emotionally taxing and costly.

Mara, for example, eventually gave up on feigning interest in sports: “I would have spent the next 15 years trying to hide from them how different I was. When you do that you miss where there are similarities and the ability to build a real relationship.” She began focusing on building relationships with colleagues based on shared interests and experiences such as family and travel. “I decided I’m going to have to take the risk here because nobody can accept and like me if they don’t know me,” she said.

Some women eschewed trying to fit in and focused on balancing blending in and being their true selves. Wanda, for example, told us that even though her white male colleagues would often have drinks after work, she wouldn’t join them. “I was never one of the guys and that wasn’t about race, that’s just who I am — that’s just being authentic,” she said.

Prior research suggests that women and minorities are often tested in leadership roles by being disproportionately given risky or precarious assignments, a phenomenon referred to as the “glass cliff.” Although the glass cliff tends to be positioned as negative, most of the women we interviewed viewed risky roles (e.g, becoming CEO of a failing business or President of a nation in economic turmoil) as strategic opportunities to overcome their invisible outsider status and prove their worth as viable leaders.

These executives staked their careers on turning around failure-prone businesses and ventures, and many took positions that were considered “dead-end” jobs. For example, Pamela (Managing Director, financial services) noted, “Everyone said to me, ‘do not take that [chief diversity officer] job.’ … It wasn’t until after I was willing to take a risk that I was able to really have success in my career.”

Some women had to fight others’ low expectations of their skills and abilities in order to be granted the opportunity to prove themselves. Pilar (Executive Vice President, consumer products) told us that her glass cliff roles helped disprove the executives who thought she wouldn’t be able to handle the job: “I thought it was going to be a terrific opportunity…I felt it bought me some organizational credibility.”

While most women seemed to “lean in” to risk, those who opted out of risky assignments did so primarily when it violated their personal values and beliefs, or when they assessed that they lacked the necessary resources and support for success. In such cases, they were likely to leave their organizations. Thus, for the executives we interviewed, fear of failure was not central in their decision-making or risk assessment. In other words, rather than saying “I can’t do that”, the women in our sample were more likely to say “I won’t do that” when faced with obstacles that either challenged their sense of self or that they lacked sufficient organizational support to overcome.

Capitalizing on Hypervisibility to Make an Impact

By the time they reached the apex of their careers, the women told us that they sought to have impact in hypervisible ways.  Many of them had taken on additional organizational roles such as managing diversity and inclusion efforts, joining boards of other (frequently non-profit) organizations, and mentoring young people.

Rather than hiding their unique status, they chose to be authentic leaders and share their experiences with others — particularly more junior up-and-coming black associates. Sarah (Senior Vice President, financial services) said: “It’s not really about me, per se. It is about creating the environment, and the safety net, and the opportunity to institutionalize some things that would be challenging, if not difficult to reverse. So that the next generation of folks who pass through here, who are likely to be younger, more diverse, ambitious… if they work hard, and we create the kind of environment for them to be their best self, the company will do extraordinarily well, and by extension so will they.”

With many challenges facing businesses today, corporate America is poised for change and new ways of thinking. Our research suggests that black women thrive in such challenging roles and are ready to answer the call.

Alexis Nicole Smith is an assistant professor of Management at Oklahoma State University. She earned her PhD in management at Tulane University and her BA from Rice University. Her research interests include gender dynamics, social identity, bias, and workplace diversity.

Marla Baskerville Watkins is an associate professor in the Management and Organizational Department at Northeastern University. She earned her PhD in organizational behavior at Tulane University, MEd from the University of Georgia, and BS from Howard University. Her research interests include power and influence, gender and diversity, and expressions of sexuality at work.

Jamie J. Ladge is an associate professor of management and organizational development at Northeastern University. She received her PhD in Organization Studies from Boston College. Her research interests are focused on the intersection of identity, work-life integration, and gender and diversity in organizations.

Pamela Carlton is the president of Springboard-Partners in Cross Cultural Leadership and the co-author of Eve of Change: Women Redefining Corporate America.