Serving in the military can boost women’s future earnings and quash significant racial and ethnic disparities in pay, a new study has found.

While white women traditionally make thousands more each year than their black, Hispanic and Native American peers, a recent report out of Florida State University shows that veteran women of color out-earn same-race nonveterans and also make more than white women who have not served in the military. Veteran women of all races earn about 8 percent more than nonveteran women.

Occupation has a lot to do with it. The study notes that while women of color are overrepresented in low-wage positions, veteran women are more likely to work in management roles than nonveteran women and also have higher representation in healthcare and protective service jobs, which include security and law enforcement.

“It’s as though military service saved them from some of the bad opportunities that their sisters face,” said Irene Padavic, the lead researcher on the study and a professor of sociology who has been researching women veterans since 2000.

The study, “Aiming High: Explaining the Earnings Advantage for Female Veterans,” comes at a time when women represent a growing share of service members. In 2015, when the Department of Defense made the groundbreaking decision to open combat positions to women, women made up 15.5 percent of the active duty enlisted force and 17 percent of officers – up from 14.7 percent and 14.4 percent in 2000, respectively, according to a Department of Defense demographics report.

It’s not entirely clear whether the skills women learn in the military contribute to their higher earnings in the civilian workforce, Padavic said. The study, to be published in the Armed Forces & Society journal in April, is based on Census Bureau data of 18- to 55-year-old women from 2008 to 2010, which does not include information on military occupation specialties.

One key takeaway of the study, however, is that the “veteran premium was large enough to raise the earnings of disadvantaged minorities to be on par with white women in the civilian labor force – and sometimes even higher,” Padavic said.

Across all races, veteran women earned more than 115 percent of what their same-race, nonveteran counterparts earned.

After averaging variables such as education, occupation, number of hours worked and children in the home, researchers in the FSU study determined that the predicted mean earnings of nonveteran white women were $1,925 higher than nonveteran black women, $2,078 higher than Hispanic women, and $6,188 higher than Native American women. Among veterans, the wage gap dramatically decreased – most strikingly down to only $86 between white and Hispanic women.

Asian women are the exception. Both nonveterans and veterans out-earn all other groups of women, which the study attributes to higher levels of educational attainment. 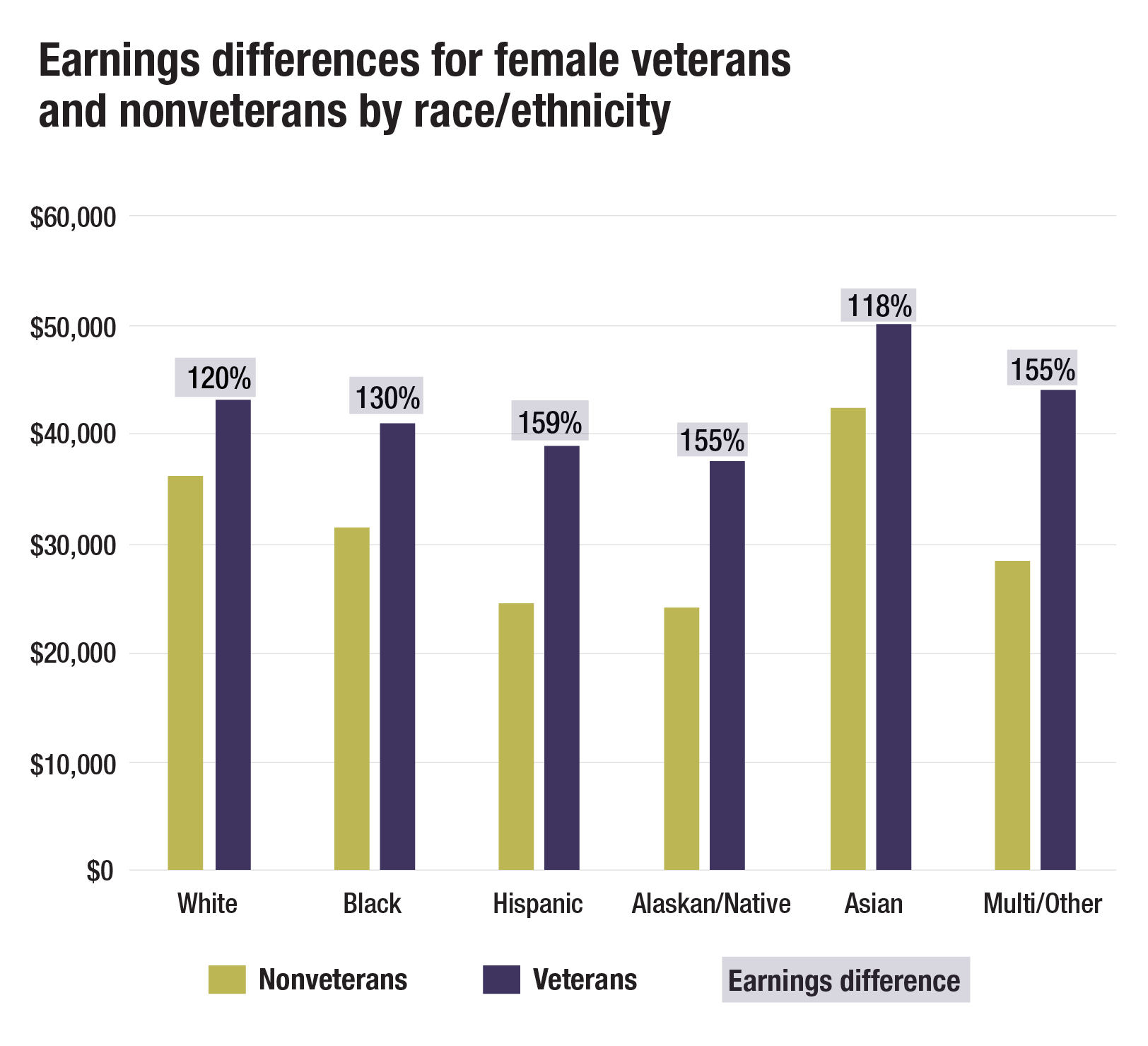 Emily Martin, general counsel and vice president for workplace justice at the National Women’s Law Center, said one reason for the overall wage gap between men and women – 80 cents for every dollar – and the specific wage gap by demographic group is “definitely because women, and specifically women of color, are still being paid less for doing the same job.”

People still bring gender and racial stereotypes into decisions about pay, even subconsciously, she said. And women of color experience other obstacles associated with their race, including discrimination and access to educational opportunities associated with higher-paying jobs.

The Florida State study doesn’t mean that all women would be better off joining the military, Padavic said.

“Veteran status has a bigger payoff for minority women than for white women,” the report states. “These findings indicate that the bridge to better employment provided by military service is especially effective for women with the lowest civilian labor-market opportunities – namely, disadvantaged minorities.”

But because white and Asian women face better labor-market prospects, military experience may not produce the same payoff as if they had spent time investing in civilian careers, according to the report.

Padavic said this study sets up interesting questions that could use further research, such as how experience in combat roles will affect women’s job prospects after the military.

“Nowadays when women depend solely on their own earnings to support themselves and their families, we need to know how well they’re able to do that after a spell in the military,” she said.