The infamous “good old boy” trucking club slowly pulls off to the shoulder, giving way to a nascent community of diverse and empowered drivers.

Minority drivers have been on the rise in the trucking and logistics industry in the recent years, and predictions show no signs of it stopping. Drawn in by the attractiveness of middle-class wages and promising opportunities for professional growth, minorities have been steadily increasing the supply of long-haul truck drivers. The marginal growth in the sector is beneficial news for both parties, seeing as the industry, which is constantly faced with a significant shortage of drivers, can increase its labor supply while simultaneously providing solid wages and career mobility for those in need.

Trucking has not only survived but thrived through many an economic crisis in the U.S. and continues to be on the rise with the growth in demand of online delivery services and the massive success of big-box giants (such as Walmart and Target), in turn making the opportunity for potential financial stability even more appealing to prospective minority drivers. Additionally, the low barriers to entry and stability of the job have often made it a gateway to middle class America. However, being a minority in a predominantly white industry has historically presented many more challenges than meets the eye. 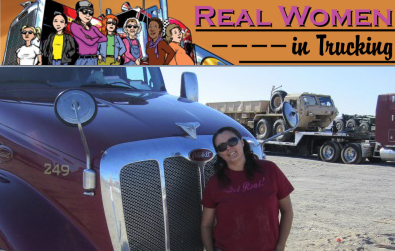 Overt racism, a clear lack of compassion, and verbal/cyber abuse are just a few ways Wood mentions that minorities are tested in the industry.

Whether it’s opportunities lost or ones they couldn’t access to begin with, minorities often felt that there was no support for them in the industry, which often strayed them away from the profession altogether.

Fortunately, there are several non-profit associations who have made significant strides towards integration.

The NMTA, National Minority Trucking Association, has made an enormous impact in the field and has pledged to assist all minorities with establishing, maintaining and growing successful careers and businesses in the trucking and logistics industries. They educate, train, consult and advocate for the 1.5 million minority truck drivers who are currently in the market. They want the training to go beyond truck driving and steer into building businesses.

Commitments and support groups like these have brought about big results. According to NMTA, there are currently 458,729 minority owned transportation firms, and there is a 21% prospective growth rate of minorities in trucking by 2020.

Truck driving requires much more than “just driving.” Drivers must have meticulous recordkeeping skills and attention to detail. NMTA values these skills, and acknowledges the fact that if drivers don’t know how to empower themselves and actively learn how to market their skills, there will be little to no climbing up the professional ladder. Informing and consulting employees about different opportunities in brokering loads, dispatching and management, for example, puts them on a hopeful track of professional growth and simultaneously incentivizes them to do their jobs even more efficiently.

Apart from NMTA, some other minority support groups have taken up arms via social media in attempts to empower and give voices to minority truckers. Black Truckers United and REAL Women in Trucking are two of most followed support communities on Facebook.

“Social media has been instrumental to allow truck drivers to have a voice to the world outside of the truck stops,” Wood remarks.  “It has become the modern CB radio.”

“Women who work as truck drivers had remained primarily invisible and marginalized in the industry until the advent of social media,” Wood professes over a Facebook interview for Freightwaves.com.

“The trucking industry has been able to control a one-sided communication model for decades, but several high profile sexual harassment and discrimination cases have forced them to look at themselves in the mirror. The REAL Women in Trucking organization is proud to say that we have continued to hold that mirror up in their face and not settled for feeble attempts to put a Band-Aid over the serious wound that exists at some student carrier training fleets.”

Wood is just one of the brave advocates that have held a safe space for prospective minority drivers to get on board in the male-dominated industry. She has a zero-bullying tolerance and constantly strives to create a safe and secure work environment for all.

As the aforementioned support organizations and social media communities have sprung up and taken action, minorities have responded positively and have rapidly joined the fleet.