Increasing diversity within academic science has been a priority for France Córdova since she became director of the National Science Foundation (NSF) in 2014. Within a year she had launched an initiative, called INCLUDES, that challenges universities to do a better job of attracting women and minorities into the field. Now, Córdova has turned her attention inward in hopes of improving the dismal track record of NSF’s most prestigious award for young scientists. 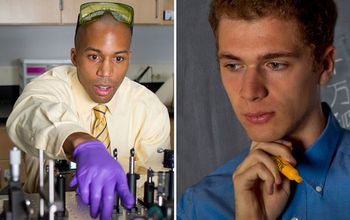 Only five women have won NSF’s annual Alan T. Waterman Award in its 41-year history, and no woman of color has ever been selected. The 2017 winners announced this month mark the 13th year in a row that the $1 million research prize has gone to a man (two, actually, including the second black scientist ever chosen.)

For decades, NSF rules required candidates to be either 35 or younger, or within 7 years of having received their doctoral degree. Those ceilings made sense when the typical academic scientist was someone who “went straight through school with no debt and no family commitments, and who could focus on research in their late 20s and early 30s without distractions,” says Karan Watson, provost of Texas A&M University in College Station and chair of the Waterman selection committee.

But Watson says those caps penalize anyone whose career has been slowed or interrupted by family, finances, or physical challenges—a group likely to be disproportionately female and members of underrepresented minority groups. So Córdova pushed to raise the ceilings to age 40 and 10 years post-Ph.D.

“We hope it will level the playing field,” says Maria Zuber, chair of the National Science Board in Arlington, Virginia, NSF’s oversight body, which approved the change at its November 2016 meeting. (The change, announced last week, applies to the 2018 competition deadlines arriving this fall.) Zuber, an astrophysicist and vice president for research at the Massachusetts Institute of Technology (MIT) in Cambridge, compared it to “stop-the-clock” policies at MIT and other universities that give faculty members more time to build the research record needed to win tenure.

If only it were that easy, says Kim Cobb, a paleoclimate researcher at Georgia Institute of Technology in Atlanta and one of six university ADVANCE professors with a remit to improve gender equity. Cobb, who has spent the past several years championing women for awards handed out by the American Geophysical Union (AGU), cites “the deep pool of issues” that female academics must deal with.

“There’s explicit bias—the idea that women don’t belong in science,” she begins. “Then there’s structural bias—only women have babies, for example. And then there’s the implicit bias that every one of us carries around without even being aware of its effect on our decisions.”

Those biases affect much more than a quest for professional recognition, of course. But prizes are important to academics, and those responsible for handing them out often aren’t aware of the baggage that they may be bringing to the selection committee.

“I think that [prize] committees genuinely want to do the right thing,” says Joan Strassmann, a sociobiologist at Washington University in St. Louis in Missouri, a vocal campaigner against gender bias in science. “And they honestly think they are doing a good job.” But she says the Matilda effect—a phrase coined by Margaret Rossiter in the 1990s to describe how the scientific achievements of women are so often credited to men, or simply ignored—demonstrates that good intentions aren’t nearly enough.

Strassmann cited research showing that individuals have a hard time choosing the best candidate from a large pool of highly qualified applicants to make the case for diversity. “Scientists pride themselves on being able to spot talent,” says Strassmann, a member of the National Academy of Sciences. “If we had more humility, we might feel free to use other criteria” that would address gender inequity more directly.

What is the nature of the current imbalance? In response to a request from ScienceInsider, NSF analyzed the last 15 years of the Waterman prize.

NSF receives an average of 59 nominees a year—from a high of 86 last year to a low of 42 and 43 in 2005 and 2006. Roughly one-quarter of the pool is deemed worthy of closer scrutiny. And women make up 26% of those finalists, called top performers. (NSF doesn’t ask applicants about gender, but officials did a manual search to determine the gender of the top performers.)

The actual percentage can vary considerably from one year to the next year—women made up as few as 10% of the top performers in 2007 and 12% in 2015, and as many as 40% last year. But regardless of the percentage, only a tiny number of women—one and two in 2007 and 2015, for example—make the short list of top performers.

Several years ago, AGU identified a similar problem with its prestigious early career award. So in 2011, AGU removed the age limit, then 36, and replaced it with a 10-year post-Ph.D. ceiling. The new rules also allow applicants to describe “special circumstances” that would warrant removing the ceiling altogether.

“We know women may take time off to have children,” says Beth Paredes, assistant AGU director for honors and science affiliations in Washington, D.C. “And it can also apply to men, for example, in countries with required military service.”

The exemption is rarely invoked, Paredes acknowledges. “But we wanted to be as inclusive as possible,” she says.

An uneven distribution of Waterman applicants across disciplines also works against women. Last year, for example, 30 of the 86 nominees were engineers, a field in which women are badly underrepresented. In contrast, the committee received only eight applications from researchers in the social, behavioral, and economic sciences.

Watson says the committee would like to see more applicants from the social sciences. Only two have won the prize, and sociologist Dalton Conley of Princeton University, a 2005 Waterman winner and current committee member, says that his colleagues face a Catch-22situation.

“Due to a lack of extant winners, the award is not as known in the social sciences,” Conley says. “And among those who are aware of it, they may figure that there is not much of a shot of winning. Hence fewer apply.”

Bumping up those numbers will take more than simply beating the bushes for strong candidates, however. Both Cobb and Strassmann say that the skills needed to succeed in winning prizes—from identifying a heavyweight advocate to rounding up the necessary supporting letters and filling out all the paperwork—aren’t taught in graduate school. Instead, they are learned through the same old boys’ network that for so long has excluded women and minorities.

“I didn’t even know the Waterman existed until 6 or 7 years ago,” says Cobb, adding that she became familiar with the award only after she and a small group of women within AGU began their advocacy efforts. And modesty would have ruled it out. “I would never have dared to aspire to such an award,” says Cobb, who was named a chaired professor last year at the age of 41.

Changing that culture will require some arm-twisting, Strassmann acknowledges. “I realize everybody is inundated with other tasks,” she says. “But I’ve resolved to nominate 10 people a year, and to urge others to do the same. And why not? I know how to do it. And it feels good.”

Though nominating more women and minorities is a necessary first step, nobody expects it will be enough to make the problem disappear. “The old excuse—that there are none who are good enough—is no longer valid,” Watson says. “But maybe we were clipping their wings too soon. The new rules will give them more time to build up their record.”

Data from AGU show a surprising gender distribution in its James B. Macelwane Medal for early-career scientists. After being an almost exclusively male prize in its first 2 decades (36 of 37 winners from 1962 to 1983), women received 17% of the awards in the next 2 decades and actually reached parity in the 5 years preceding the rule change. Since 2012, however, men have captured 70% of the 24 medals.

Jeffrey Mervis tries to explain how government works to readers of Science.