IMDiversity 6 years ago Comments Off on Obamas unveil design of presidential center in Chicago 1.6 K
By Angela Caputo, Katherine Skiba and Blair Kamin
Chicago Tribune, May 4, 2017 —

Barack and Michelle Obama on Wednesday offered the first look at the design of the planned Obama Presidential Center in Jackson Park — a campus of three buildings highlighted by an eye-catching museum, whose height and splaying walls would make a bold architectural statement. 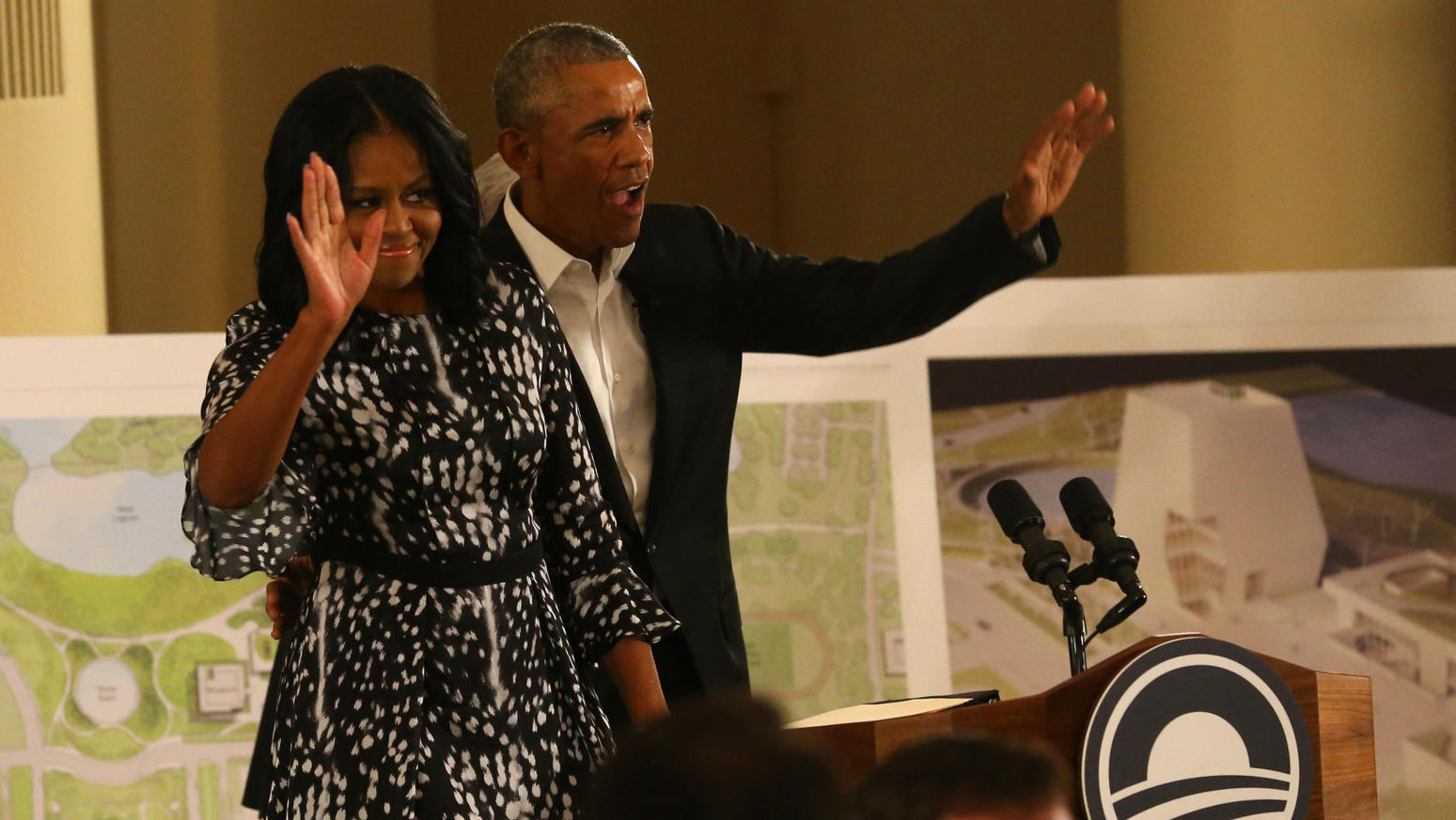 Calling it a “transformational project for this community,” the former president said he and Michelle Obama envisioned a vibrant setting that would be akin to Millennium Park — a destination for those drawn to the presidential center and the park itself. But to achieve this, the plans call for closing Cornell Drive, a major access route used by thousands of commuters a day.

“It’s not just a building. It’s not just a park. Hopefully it’s a hub where all of us can see a brighter future for the South Side,” he told an audience of about 300 political and community leaders at the South Shore Cultural Center. It will also become, the Obama Foundation said, the first completely digital presidential library, with no paper records stored on site. 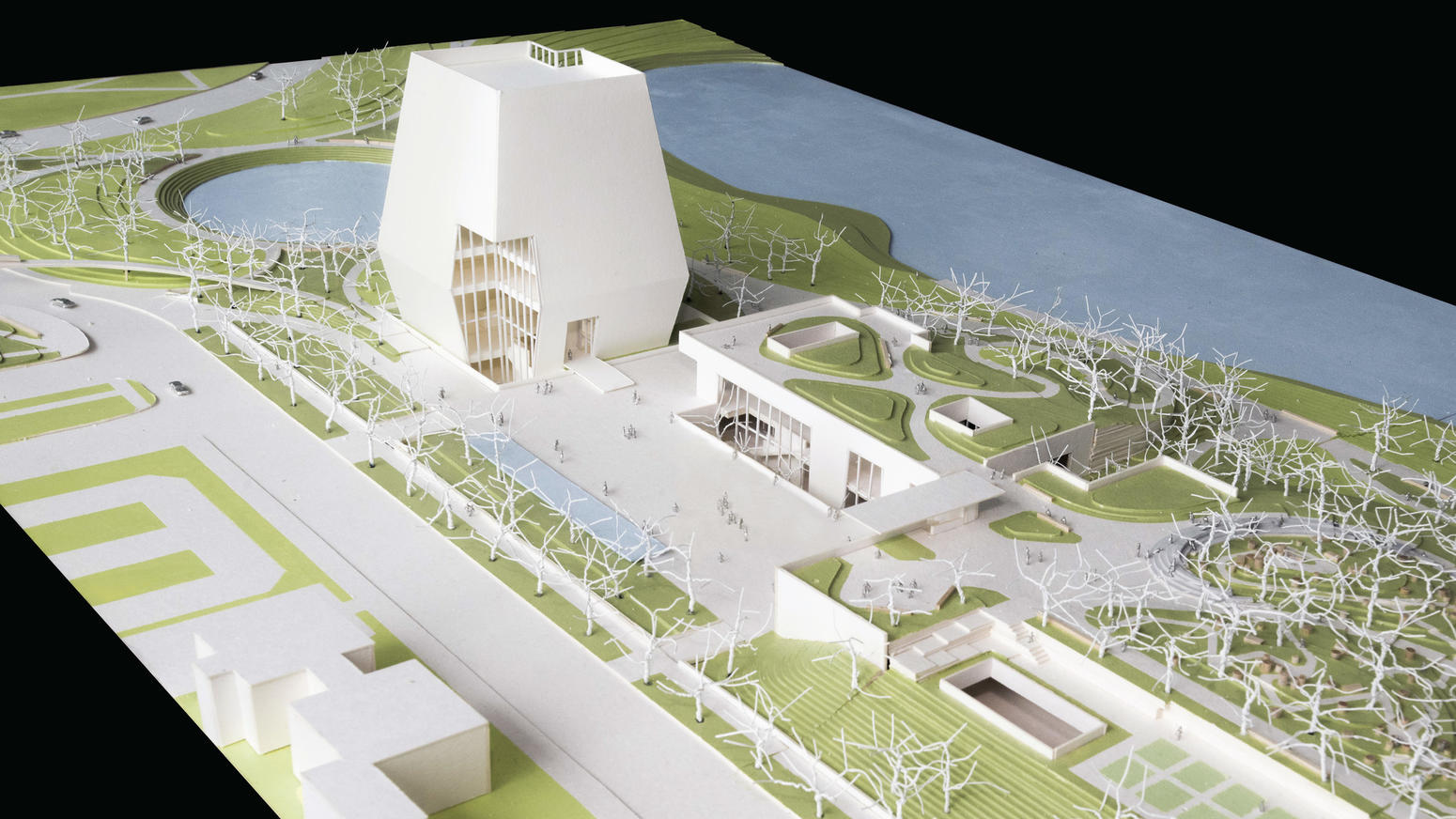 The museum, housing exhibition space as well as education and meeting rooms, will be the tallest of the three structures, reaching as high as 180 feet. It will be clad in a light-colored stone and will serve as a “lantern” for the complex.

To its south will be the forum building, which will house an auditorium, restaurant and public garden, and the library building. The building could also contain a branch of the Chicago Public Library.

The library, though, will not contain Obama’s paper records. Instead, it will be the first presidential library to fully digitize a president’s unclassified records.

The paper documents will be housed at separate facilities maintained by the National Archives and Records Administration, which has control over Obama’s records, the foundation said. The location of those sites has not been determined, said John Valceanu, NARA’s director of communication and marketing in Washington.

“NARA will then provide access to the Obama Presidential records virtually,” the Obama Foundation said in a statement. If the library, or another museum, needs a physical copy of a document or an artifact, it will be made available on loan from the National Archives.

For now, the voluminous documents, artifacts and gifts amassed over Obama’s eight years in office are being housed and processed in a warehouse in Hoffman Estates.

Outside the library in Jackson Park, pathways will enable visitors to walk from the park to landscaped roofs above the library and forum, which would each be one story tall. From the roofs, there will be views of Lake Michigan, the Jackson Park lagoon and an outdoor plaza that would connect the three buildings.

The former president painted a picture of a vibrant park around the center, where children would sled down newly created hills, where people would barbecue and where activity would spill over to nearby stores and restaurants.

The Obamas want the center to be a living thing, not a building that “kids are being dragged to for a field trip,” the former president said.

He said there is a tendency to see presidential libraries as “a monument to the past, a little bit of ego-tripping.” Instead, he wants a building that “looked forward, not backward, and would provide a place to train future leaders to make a change in their communities, countries and the world.”

Beyond the center itself, one of the biggest changes for the community is the plan to close Cornell Drive between 60th and 67th streets, a major thoroughfare that links South Lake Shore Drive, Stony Island Avenue and the Chicago Skyway.

Closing Cornell could add as much as five acres of new parkland and an extra level of safety for visitors, Obama said.

He said state and local officials had started doing traffic studies. “We are confident that we will not be adding to commute times,” he said. With minimum mitigation measures, he said, the closing would add one to three minutes to commutes.

Obama added that he doesn’t want everyone to get so “fixated on traffic that we lose sight of what’s possible.”

Initial reaction from one park advocacy organization was positive. 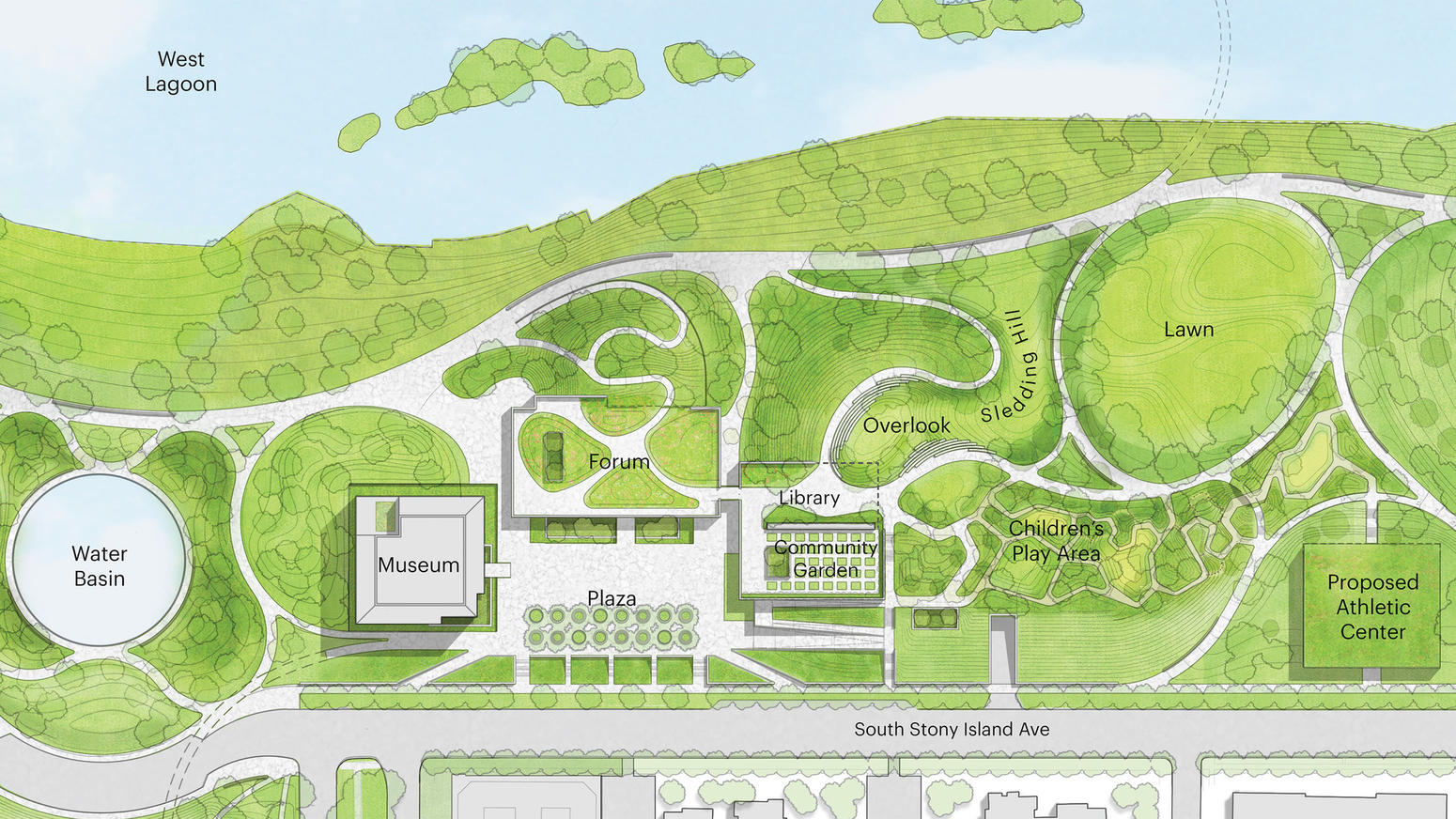 “It incorporates the best of the outdoors and the best of the indoors,” said Louise McCurry, president of the Jackson Park Advisory Council. “There’s lots of green space, lots of grass and room for kids to run and to play.”

Another prominent group, Friends of the Parks, which had opposed situating the library on parkland, had a more measured reaction, saying that it had not yet had time to assess the plans.

The design was chiefly crafted by Tod Williams and Billie Tsien, the husband-wife New York architects who appeared with the Obamas on Wednesday.

The three buildings could encompass 200,000 to 225,000 square feet, the foundation said. That would be roughly the same size, or slightly larger, than the George W. Bush Presidential Center in Dallas.

The Chicago center will be built in the northwest corner of historic Jackson Park, on a sliver of land just south of the Museum of Science and Industry. It will require moving an athletic field and running track to the south along Stony Island Avenue.

An architectural model on display at the South Shore Cultural Center showed a possible location for the Obama center’s parking. It could be placed beneath a mound to the west of Stony Island Avenue and to the east of commuter railroad tracks. 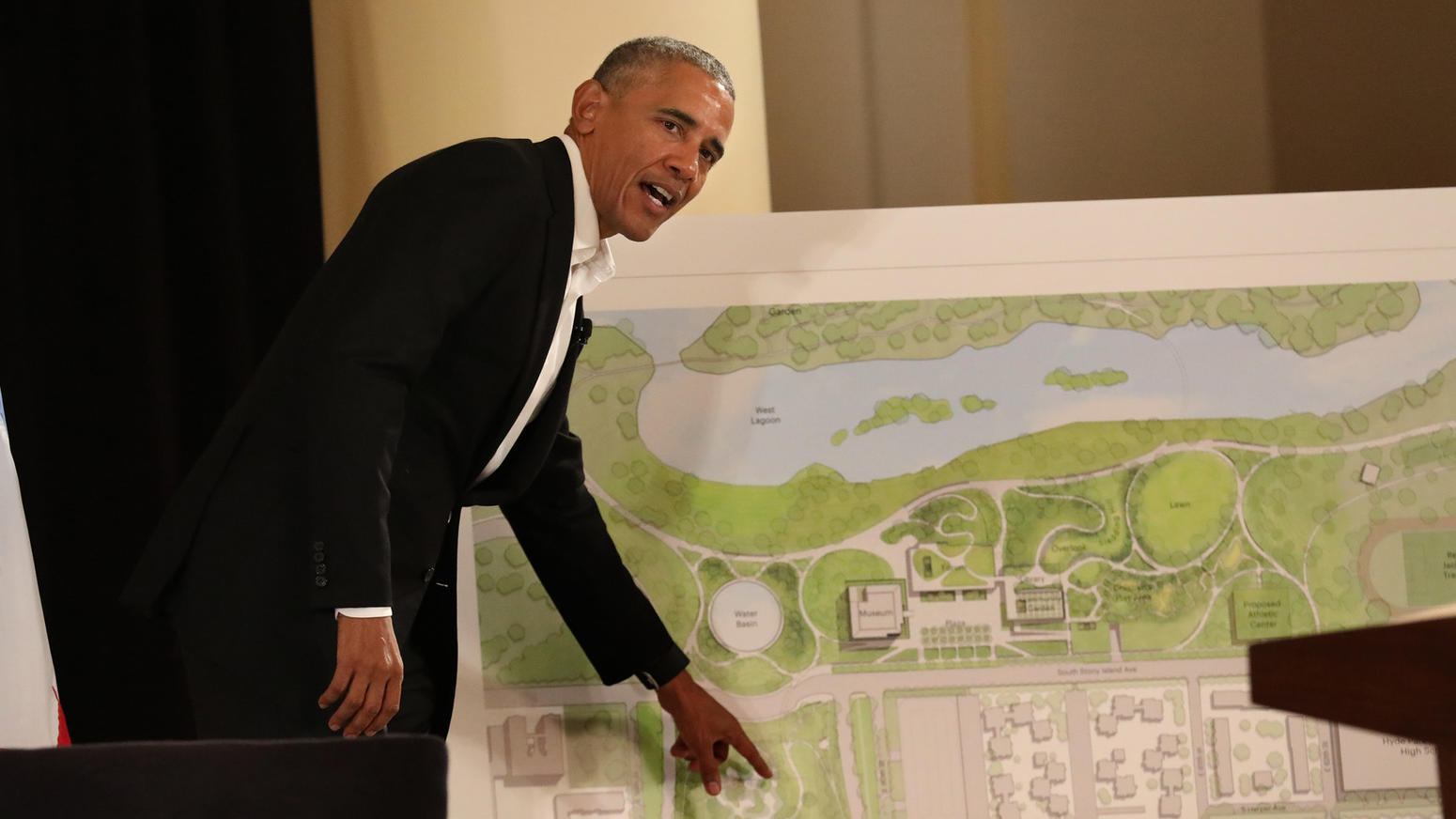 The site is the eastern terminus of the Midway Plaisance that connects Jackson and Washington parks.

Wednesday’s announcement signals a new phase in the daunting task of raising the money to pay for the ambitious project and the foundation has been hiring staff in anticipation of that.

A spokeswoman for the Obama Foundation said afterward that it was too early to specify the building’s cost. But the George W. Bush library and endowment, by comparison, broke records at more than $500 million, and federal endowment requirements have increased since then.

The media mogul Fred Eychaner — a reclusive Democratic Party mega-donor who has already donated $1 million to the center — was one of the few super-wealthy attendees at Wednesday’s unveiling. But the Obamas said at the unveiling that they would donate $2 million for summer jobs and apprenticeships.

And after the unveiling, the former president wasted little time turning his attention to the business community.

He was scheduled to appear that night before a more deep-pocketed crowd at the Chicago Club, to address the Civic Committee of the Commercial Club of Chicago — the same organization that bankrolled Daniel Burnham and Edward Bennett’s 1909 Plan of Chicago.