The Mardi Gras Indian Of ‘Lemonade’

IMDiversity 7 years ago Comments Off on The Mardi Gras Indian Of ‘Lemonade’ 1.4 K

Though the Mardi Gras Indian who appears in Lemonade is a young woman, most people who mask and parade as part of the tradition are male. Beyonce’s new visual album Lemonade is chock full of images begging to be unpacked, from the Yoruba face paint to the baseball bat named Hot Sauce to the brief shot of a kintsuji bowl. “You could write a think piece on every single frame of Lemonade and it almost still wouldn’t be enough,” writes Lainey of Lainey Gossip. She’s not exaggerating.

One such image arrives about 45 minutes in: For almost 40 seconds, a figure slowly circles a dining room table as she shakes and strikes a tambourine. She’s dressed head-to-toe in white, decked out in feathers, intricate beadwork, and a headdress the size of a small human.

This scene might seem like another example of the visual mystery that Lemonade is lush with — she could be a ghost, she could be delivering a blessing. But for people versed in New Orleans culture, this, like much of the imagery in the album, is familiar: the young woman circling the table is a Mardi Gras Indian.

Mardi Gras Indians are groups of African-Americans, referred to as “tribes” and organized by neighborhood, who dress up and parade during Mardi Gras, St. Joseph’s Day and Super Sunday. Tradition holds that their hand-sewn costumes are worn for only one season, and they can take a year or more and thousands of dollars to make. According to New Orleans Online, their costumes can weigh up to 150 pounds. 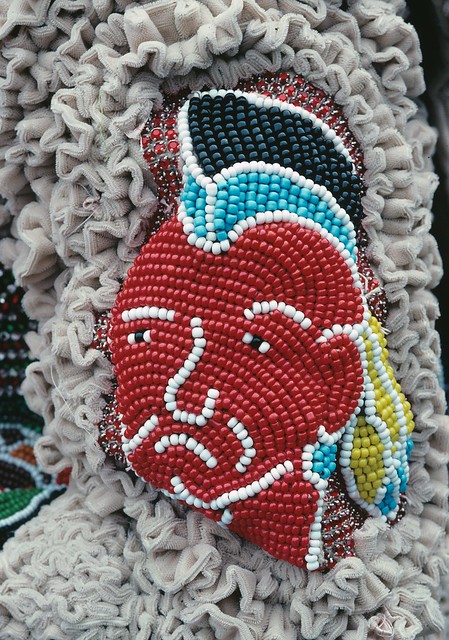 Larry Bannock, the former president of the New Orleans Mardi Gras Indian Council, described the Mardi Gras Indians as “the parade most white people don’t see.” The times and locations of the parades vary, so unless you’re part of the community, it’s not easy to predict when they’ll be around. When different tribes encounter each other in the streets, there’s usually some sort of power play: Years ago, they would physically fight each other, but today they participate in faux battles that include dancing and chants.

There isn’t consensus on exactly where the tradition stems from. “The tradition of masking as Indians is something that we really don’t know the answer to, because it was done a long time ago before there were records that were held,” Donald Harrison Jr., who belongs to the tribe Congo Nation, told News & Notes in 2006. Here’s what the New Orleans trivia expert Blake Pontchartrain (!) had to say:

“One common belief is that local Native American tribes sheltered runaway slaves, and the two cultures merged. Some Mardi Gras Indians claim direct Native American ancestry. Other people believe the intermingling of Native Americans with Creoles, slaves and free people of color in Congo Square brought about the merge.

There are also accounts of blacks participating in the Buffalo Bill Wild West shows that traveled through major cities in the late 1800s and being influenced by the costumes. Later, Jim Crow laws barred the Mardi Gras Indian tribes from parading with mainstream Carnival krewes on Canal Street or St. Charles Avenue, so they stayed within their neighborhoods and became solidified.”

The krewes that Pontchartrain refers to are modeled after royal courts, with a king, queen, duke and so on. Back in the day, people of color were excluded from those krewes, so they created their own — the Mardi Gras Indian tribes.

I spoke to Keith Woods, NPR’s vice president of diversity and a New Orleans native, who told me that it’s still pretty uncommon to see women in Mardi Gras Indian regalia — which adds another dimension to Beyoncé’s choice to include a young woman in that scene. (Mardi Gras Indian tribes have traditional roles, often passed down from father to son, and the only role reserved for women is “Queen.” For many years, that role was considered ancillary.) Some tribes do allow for gender flexibility, but the face of the Mardi Gras Indians has been overwhelmingly male.

And as you might expect, there’s been some interesting discussion about what it means that a group of black Americans uses costumes, chants and language identified with Native Americans. Adrienne Keene of Native Appropriations, who writes about the way Native American iconography is used in the broader culture, has decidedly mixed feelings on the subject. “The history of Mardi Gras Indians comes out of a history of shared oppression and marginality between the Black and Native residents,” she writes. And while she isn’t sure if Mardi Gras Indians are engaging in cultural appropriation, she says (and others agree) that they still make her uncomfortable.

(Harrison, the aforementioned member of Congo Nation, said this to NPR: “I think some Native Americans may be angry about it. But this year I have taken that and said, you know what, I am going to rename my group. So we are an African-American tribe of New Orleans.”)

THE PICTURE SHOW:  The Mysterious World Of The Mardi Gras Indians

Race continues to inform Mardi Gras traditions more broadly. At the end of the yearly parade, the white krewes and the black tribes split off in different directions to continue their revelry. Sometimes they even take entirely separate routes.

Beyoncé’s decision to feature a young, female Mardi Gras Indian in Lemonade serves several purposes. It’s a shout-out to her family’s Louisiana heritage and another example of her centering black women throughout the video.

The costumed young woman later briefly reappears in a segment in which the female relatives of black men who were killed by police — Sybrina Fulton, the mother of Trayvon Martin, and Leslie McSpadden, the mother of Mike Brown — are holding photos of their slain loved ones; the Mardi Gras Indian is holding an old black-and-white photo of her own.

Her expression during both appearances is solemn, and we know that she has her own story that we only get a glimpse of. Like so much of Lemonade, the Mardi Gras Indian’s appearance is a nod to inheritances, both political and personal, of womanhood and heritage and history and race.