Two of the biggest movements in the U.S. just teamed up to demand economic and racial justice

IMDiversity 6 years ago Comments Off on Two of the biggest movements in the U.S. just teamed up to demand economic and racial justice 1.1 K

On Monday, Rev. William Barber II’s Moral Mondays movement stormed the grounds of state capitols in 31 states, what he claims is the largest simultaneous protest of its kind in the country’s history. And low-wage workers who have been part of the rapidly growing Fight for 15 movement were part of the demonstrations to tie their fight for economic justice to other fights.

Fran Marion, who has worked as a cashier at Popeye’s in Kansas City, Missouri for the last two years, was at her state capitol seeking a better life for her two teenage children and a raise from her current pay of $9.50 an hour.

She has a difficult time providing for her children with the money she makes. “I have rent, I have the gas bill, water bill, phone bill,” she said. “Each month you got to choose between your kids and the rent, or your kids and the light bill. My kids, they suffer.”

According to organizers, thousands of low-wage workers like Marion took part in Monday’s protests, joining hundreds of faith leaders. Fast food workers dedicated the day to Myrna De Los Santos, a resident of Kansas City who worked for McDonald’s for four and a half years before her death on August 27 at the age of 49.

De Los Santos died due to complications from her diabetes, something that protesters contend wouldn’t have happened if she had gotten Medicaid coverage under the Affordable Care Act or made a higher wage. In 2013, Missouri’s legislature shot down an expansion of Medicaid, while the Kansas City was blocked by the state from raising its minimum wage to $13 an hour in October of last year.

Marion was a friend of De Los Santos. She remembered her as a warm, happy, and passionate woman. “She was always at the front of the line [at protests] and smiling and encouraging, always,” she said. “Myrna was a beautiful person, always out here fighting with us.”

Politicians: can you hear us? We demand a #MoralRevival #FightFor15 pic.twitter.com/UG0yk3WapA

But now De Los Santos is missing from the movement. “Due to her low wage, she wasn’t able to afford health care to take care of her diabetes,” Marion said. “If Myrna had Medicaid, and if the Medicaid law was passed, we do believe in our hearts Myrna would be standing with us today.”

The experience hits close to home for Marion: Her daughter is pre-diabetic. “Does that mean she doesn’t have any medical care and I’ll be facing the same situation we faced with Miss Myrna?” she said. “I can’t see that. I won’t see it.”

The memory of De Los Santos is part of what drove Marion to protest on Monday. “We’re going to continue the fight until we will in her honor so that none of us are faced with that,” she said. 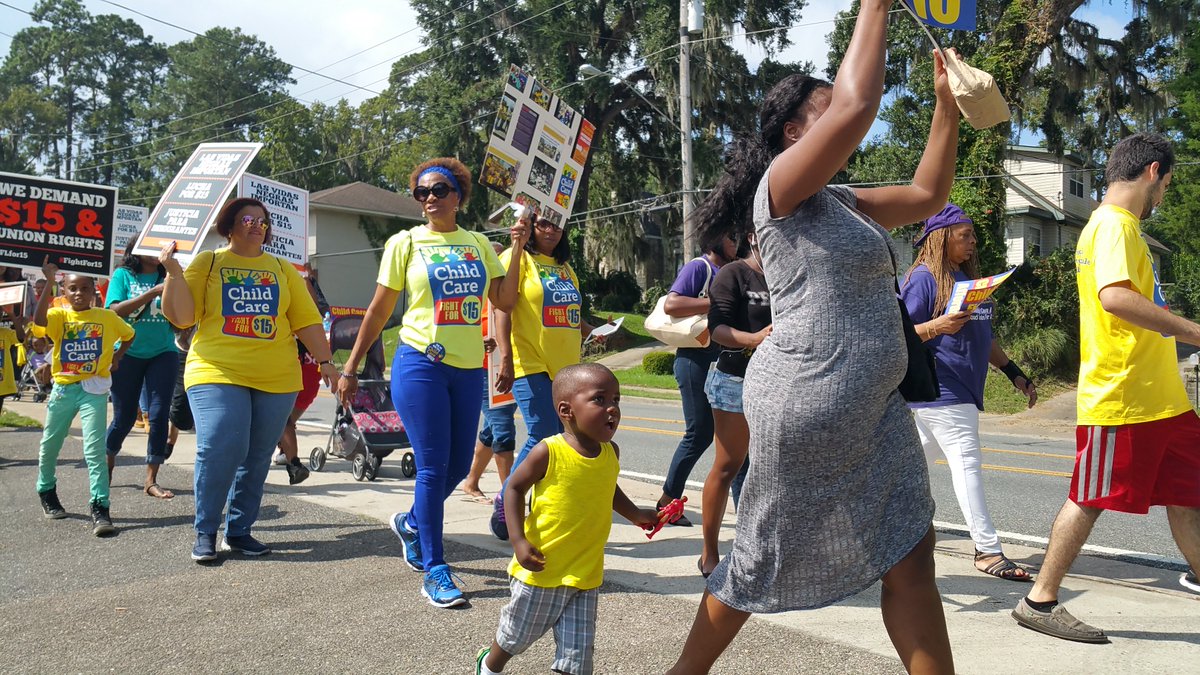 The Fight for 15 movement that started with a strike in New York City in 2012 has recently taken on more issues than demanding higher pay and the ability to unionize. At a national convention of the movement in August, workers and organizers connected their work to racial justice and the country’s history of slavery, vowing to fight against issues such as police violence and inequality in housing and education.

“These are deep, deep moral issues in our time.”

“Economic justice, poverty, and living wages…all the things that have to do with the just economy are the first principle of any truly religious moral endeavor,” Rev. Barber said. “Jesus starts his public ministry talking about the poor.” 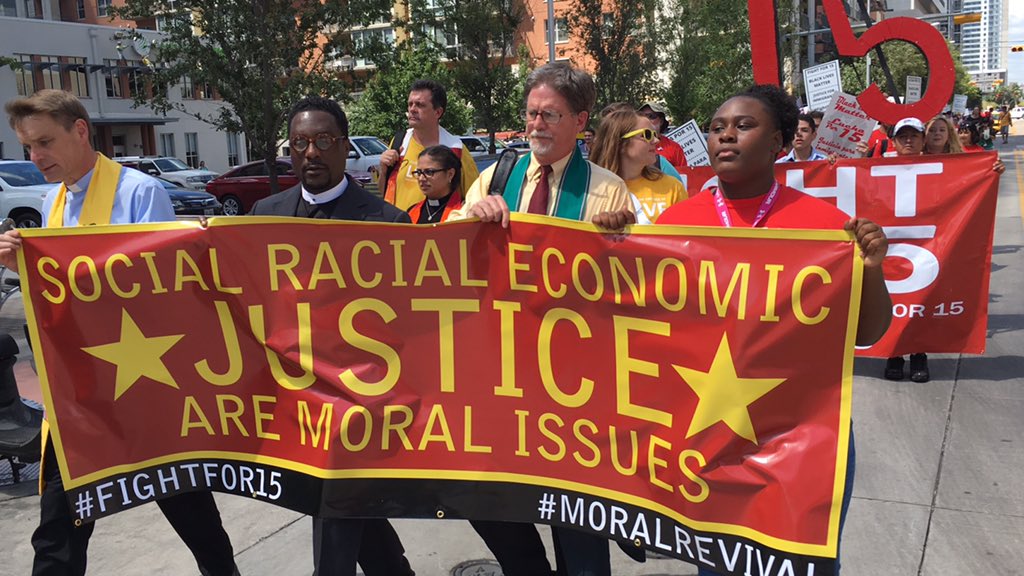 Fight for 15 TEXAS. Texas is marching to the State Capitol for a #MoralRevival #FightFor15

But economics, he said, must be linked to all of the other issues plaguing poor Americans. “You can’t separate them out. One is not more important than the other,” he said. Minimum wage workers, for example, are more likely to be African American and often lack health care or run up against the criminal justice system.

“These are deep, deep moral issues in our time,” he said.

Jones has a degree in medical assisting and has been in her line of work for four years, yet she makes $9 an hour.

“It’s very stressful,” she said. Fighting off tears and starting her sentence over a number of times, she added, “I’m struggling between paying the light bill then paying the rent then paying the car note. I have to sacrifice one of those things to get by. That is wrong.” She wants to do more for her son, but she often can’t.

“I’m not trying to get rich, I’m just trying to live comfortably,” she said.

That’s what drove her to join the Fight for 15 and take part in Monday’s protests. “I don’t want to be silent, I want to speak out, and I want the right people to hear me,” she said.

And she was also excited about the diverse coalition that she was joining. “We’re trying to fight for justice in some way, whatever the case may be,” she said. “It brings me joy to know that I’m not alone in this fight.”