US supreme court upholds affirmative action at University of Texas

IMDiversity 6 years ago Comments Off on US supreme court upholds affirmative action at University of Texas 1.3 K

Justices rule 4-3 in favor of controversial admissions programme that considers race as a factor, in major victory for supporters of affirmative action

By David Smith in Washington and Alan Yuhas in New York 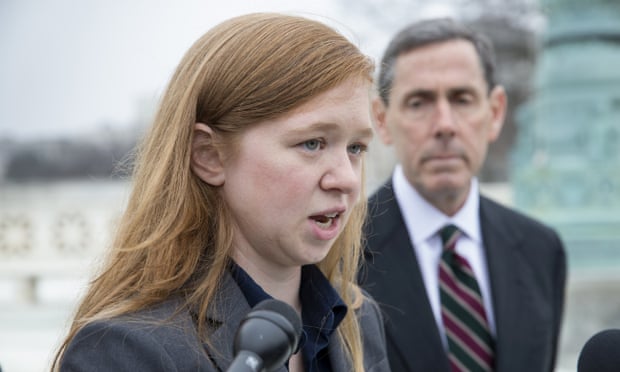 Abigail Fisher, who challenged the use of race in college admissions, joined by lawyer Edward Blum. Photograph: J Scott Applewhite/AP

The principle of affirmative action for African American and Hispanic people seeking access to higher education received a boost on Thursday when the supreme court upheld a controversial programme run by the University of Texas.

In a 4-3 ruling, the court decided that the university’s scheme, which considers race as part of its admissions process, is constitutional. Justice Elena Kagan recused herself from the case because she worked on it while serving in the justice department.

Most students are admitted to the University of Texas through a scheme that guarantees slots to Texans who graduate in the top 10% of their high school classes. But for a quarter of its intake, it considers race as one factor among many, a formula supported by the Obama administration.

Justice Anthony Kennedy warned that though the Texas program is constitutional it may still be the subject of future scrutiny by the courts.

“The Court’s affirmance of the University’s admissions policy today does not necessarily mean the University may rely on that same policy without refinement,” he wrote. “It is the University’s ongoing obligation to engage in constant deliberation and continued reflection regarding its admission policies.”

Kennedy wrote that universities deserve “considerable deference” in how they run themselves, “but still, it remains an enduring challenge to our nation’s education system to reconcile the pursuit of diversity with the constitutional promise of equal treatment and dignity”.

Universities and states can be “laboratories for experimentation”, he said, citing UT Austin as a school that could serve as an example to others. But his commendation came with an order to continuously re-evaluate whether “changing demographics have undermined the need for a race-conscious policy”.

Justice Samuel Alito took the remarkable step of reading his dissent from the bench – an act reserved only for when justices, usually decorous even in defeat, passionately disagree with a ruling. After Kennedy read the conclusions of his 20-page ruling, Alito read his 50-page dissent in its entirety.

“UT’s crude classification system is ill suited for the more integrated country that we are rapidly becoming,” Alito said. “If an applicant has one grandparent, great-grandparent, or great-great-grandparent who was a member of a favored group,” he asked, “is that enough to permit UT to infer that this student’s classroom contribution will reflect a distinctive perspective?”

This system of self-identification, Alito argued, “is an invitation for applicants to game the system”.

In a separate dissent, Justice Clarence Thomas repeated his view that the constitution outlaws any use of race in higher education admissions.

Democratic presidential candidate Hillary Clinton welcomed the ruling, calling it a “win for all Americans”.

“Having a student body with diverse experiences and perspectives breaks down barriers, enriches academia, and prepares our young people to be leaders and citizens in our increasingly diverse country,” she said.

Arguments at last December’s hearing focused on whether the university can be justified in using race as a factor and showed a clear split between conservatives and liberals.

Abigail Fisher, a white woman from Texas, claims she was deprived of a place at the university because of her race. Bert Rein, representing Fisher, argued that the “top 10%” programme was sufficient to bring in Hispanic and African American students and said the university could adopt other measures to diversify its student body without explicit reference to race.

Texas said the “top 10” programme alone was not enough and it needed the freedom to fill out incoming classes as it saw fit. Gregory Garre said on behalf of the university that minority enrolment dropped at top public universities in California and Michigan after they ended consideration of race.

“If this court rules that the University of Texas can’t consider race, we know exactly what will happen: diversity will plummet, especially among African Americans,” Garre said. “Now is not the time and this is not the case to roll back student-body diversity in America.”

But during oral argument, Alito said the university was engaging in “terrible stereotyping” by suggesting there was something “deficient about the African American students and the Hispanic students who are admitted under the top 10% plan”.

It is unclear what what impact the death of conservative Justice Antonin Scalia in February ultimately had on the opinion.

Scalia might have swayed the moderate Kennedy away from such a strong affirmation of race-conscious admissions. In at least three past cases on related issues, Kennedy had sided against affirmative action programs. Scalia at the very least could have deadlocked the decision 4-4. The conservative justice had made his opinion on the case known in December, when he suggested that black students might benefit from the end of affirmative action.

“There are those who contend that it does not benefit African Americans to get them into the University of Texas where they do not do well, as opposed to having them go to a less-advanced school, a slower-track school, where they do well,” he said during oral arguments in December.

The court first heard Fisher’s case in 2012 but the case ended inconclusively and was sent to a lower court for review. The federal appeals court in New Orleans twice upheld the Texas admissions programme and rejected Fisher’s appeal.

Fisher’s case was conceived by Edward Blum, an opponent of racial preferences. Blum also is behind lawsuits against Harvard University and the University of North Carolina that aim to eliminate any consideration of race in college admissions.

The supreme court has previously allowed affirmative action in limited cases though it has said it wanted to phase it out because it was a form of racial discrimination.

Such programmes date to the 1960s, when they were first used to try to reduce racial segregation, but strict quotas were ruled unconstitutional by the court in 1978. Since another test case in 2003, race may now only be used as a factor if it can be shown to be essential in creating educational diversity in class.

The Associated Press contributed to this report