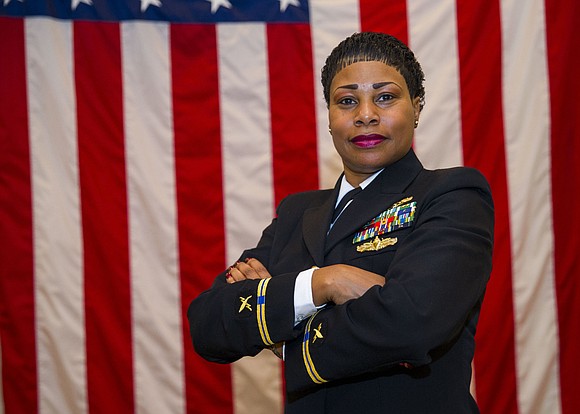 The Chicago, Illinois native started her Navy career at Recruit Training Command Orlando, Florida in March 1988. From there she attended Cryptologic Technician Collection (CTR) “A” School where she achieved the notable accomplishment of honor graduate.

As her list of successes continued, Simmons-Fowler earned the title of chief petty officer in September 2001 while serving aboard USS Bataan. Later, during her tour at Naval Security Group Activity in Norfolk, Virginia she was selected for the CWO program in 2003, beginning her life as a chief warrant officer.

“This was my goal since the beginning of my career,” said Simmons-Fowler. “I have always strived for the next level, the pinnacle profession, and I earned it.”

The historic promotion is the result of hard work and dedication that isn’t achieved alone, but with the help of mentors and shipmates along the way.

“None of us ever gets here alone,” said Capt. Alonza Ross, the director of enlisted distribution at Navy Personal Command and mentor to Simmons-Fowler. “It takes a lot of support from family, friends and shipmates. I certainly understand how significant this achievement is, and I knew she was capable of doing it.”

Inspiration follows this woman who has achieved so much. The protégés that Simmons-Fowler mentors see that they also have the opportunity to achieve just as much, if not more.

Simmons-Fowler explains that being a chief warrant officer in the U.S. Navy requires a person to be more than just skillful in their field.

“You have a lot of leaders out there,” said Simmons-Fowler. “When it comes to chief warrant officers, we are supposed to be the technical experts. So when the commanding officer needs someone to give him feedback on a system, they are going to find the warrant officers, because they will tell them what they need to know, not what they want to hear.”

In the U.S. Navy, the chief warrant officer rank is a technical specialist who performs duties that are directly related to their previous enlisted rating.

“With every successful leader there is always a great team of Sailors that are hard-working, hard-charging and dedicated to completing the mission,” said Simmons-Fowler. “Those are the people doing the work to make sure we succeed as a team. To those people, I’d like (say) thank you from the bottom of my heart.”