IMDiversity 6 years ago Comments Off on What It’s Really Like to Be a Native American Teen Today 2.8 K

Emanuel Vigil, the Jicarilla Apache teen who introduced Michelle Obama at the Santa Fe Indian School commencement, on the complexities of indigenous life.

Like a lot of recent American high school graduates, I spend way too much time on Twitter, I’m a huge Lady Gaga fan, and I can’t wait to go to college in the fall. But instead of spending my first few days of summer break going to the beach or partying with my friends, I’m in the midst of taking part in a Bear Dance, a four-day-long healing ceremony where we sing in our traditional Athabaskan language and dance in a wild, heavily wooded part of New Mexico. It’s an amazing time to get away from the burdens of technology and actually have a conversation with our elders about the history of our people.

The Bear Dance is one of the sacred ceremonies of my Native American tribe, the Jicarilla Apache Nation. I am from Dulce, New Mexico, the most populous town on our reservation, where I lived until I went to the Santa Fe Indian School in seventh grade. A Native American boarding school, the institution was thrust onto the national stage this year when Michelle Obama spoke at our commencement. As the valedictorian, I had the honor of introducing the First Lady, which was extremely surreal. The salutatorian and I found out during practice the day before graduation that we were going to be sitting next to Ms. Obama during the ceremony. We were sworn to secrecy until the actual day of graduation.

On commencement day, I arrived on campus to a media frenzy, with several yellow school buses surrounding the gym for security purposes. I dressed in my traditional regalia and met my classmates in one of the classrooms, all in their own unique tribal clothing. For many of us, this was the last time that we were going to see or speak to each other, as we’re from reservations across the United States. Because many Native Americans wear lots of turquoise and silver jewelry, we had to take all of this off to pass through the security checkpoint. Before the ceremony, we were taken outside for a photo with the First Lady. As ten black SUVs drove through the barrier of buses, news and security helicopters flew overhead. When FLOTUS arrived, we were mesmerized by her glamour and beauty. She was calm and collected, while many of us were not. 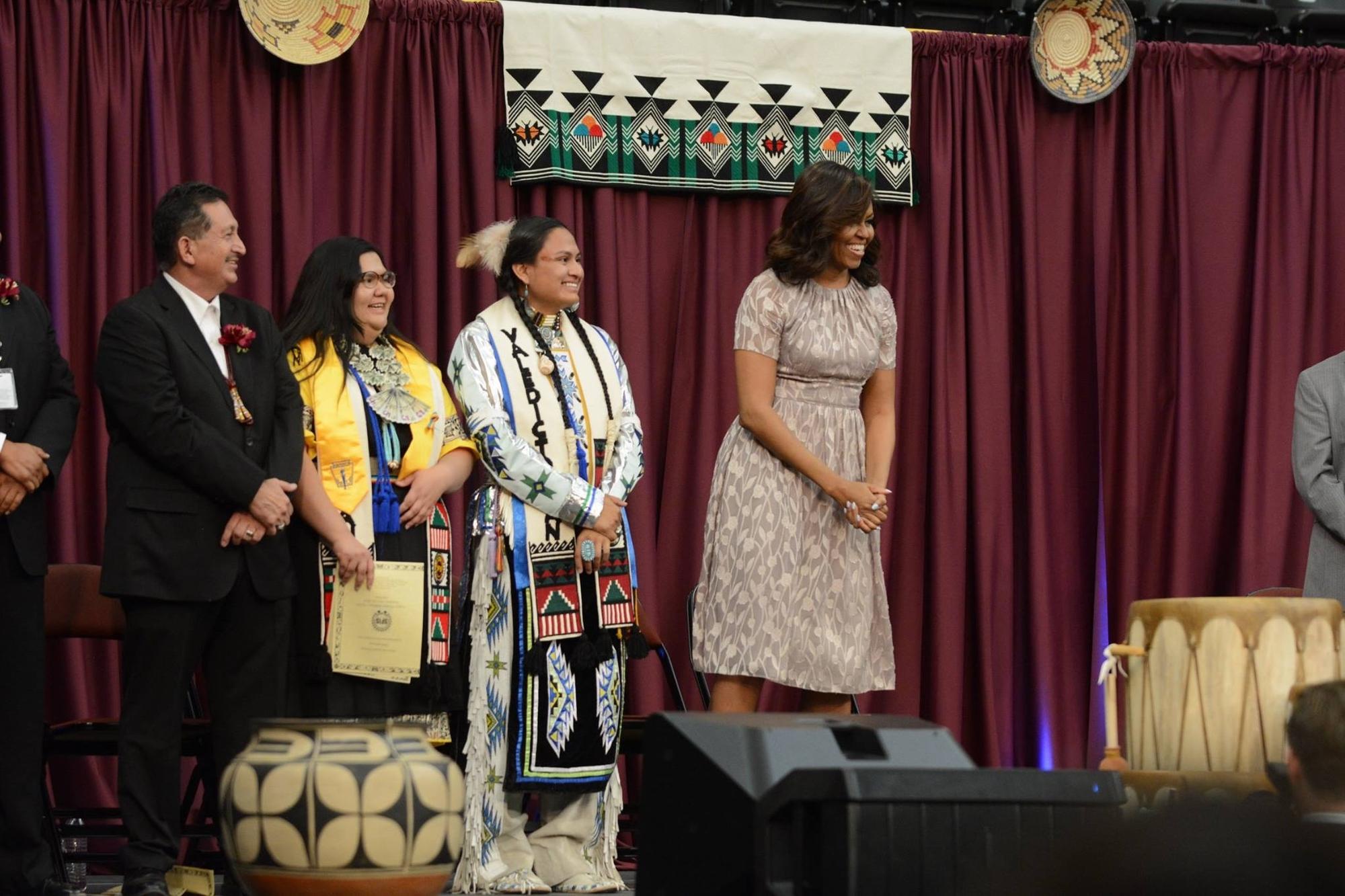 When introduced to the first lady, the salutatorian and I immediately started crying, and she told us to stop crying or she would cry herself! She said that she loves us, and that we are doing amazing things for indigenous youth across Indian country. We presented her with jewelry and handmade pottery. I gave her one of my micaceous pottery pieces, a traditional craft I learned from my uncle. During the graduation, we told her about our teachers, our parents, and our classmates. She told me how wonderful it is that I am attending Columbia University and how she is sad that her daughter Malia is going to college soon.

While graduates across the country donned black caps and gowns, I wore our puberty ceremony clothing: buckskin leggings with beaded loomwork designs, a silver ribbon shirt, a midnight blue velvet apron with ribbon designs, a bone breastplate and choker, beaded armbands, abalone shell earrings, beaded moccasins, and turquoise and silver rings. My entire family collaborated to make this outfit. My two long braids represent longevity, the jewelry (made by my uncles) indicates wealth, and the designs and colors represent the four changing seasons and growth on earth. I also wore a BB-8 Star Wars keychain figurine so I could calm my nerves while I gave my speech. 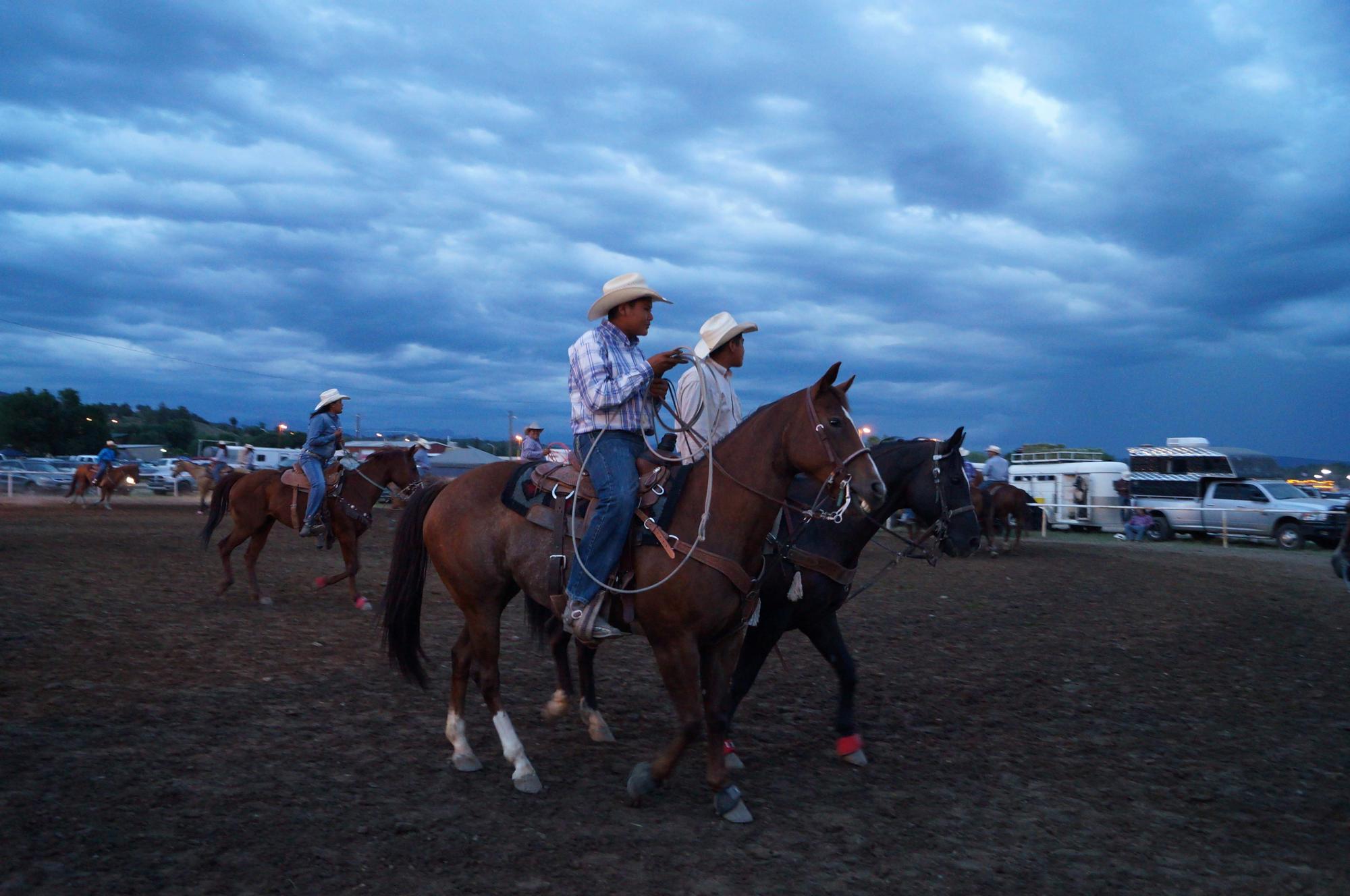 Ms. Obama’s visit to our school brought the experience of being a Native American teen today back into the public consciousness. Many people probably didn’t even know about the existence of the Santa Fe Indian School until the first lady’s visit. Despite the fact that our ancestors were obviously this country’s original inhabitants, and that we are still over 4 million strong, in some ways Native Americans are an invisible minority in this country.

First of all, there’s the issue of nomenclature. Modern Native American teens I know prefer to be called “indigenous.” There is also a growing movement called “native youth” with a #nativeyouth hashtag on Twitter, which speaks to the indigenous teen experience. When Columbus first colonized the Americas, he thought he landed in India, so he called the inhabitants “Indians.” We are trying to distance ourselves from the term “Indians” as Columbus is often associated with the genocide of native peoples, the taking of resources, and the detriment of our existence as a people.

Some young people stay on their reservations to attend Bureau of Indian Affairs schools, and others — like me — travel to boarding schools such as the Santa Fe Indian School to get what is often a better education. Schools on the reservations are usually underfunded and it is difficult to find good teachers that work for low wages. They are often located in rural reservations such as the Jicarilla Apache Nation and the Navajo Nation.

Boarding schools however, are more centrally located, in places like Santa Fe, or the Los Angeles suburbs. They have staff members that advocate for funding and the progression of the students’ education. Many students go on to high-profile universities. From my school alone, graduating seniors are going to schools like Dartmouth College and Stanford University, in addition to Columbia. It only costs $50 to attend the Santa Fe Indian School for the entire year. This fee includes books, field trips, dorm room boarding, dining, transportation during the major holiday breaks, and uniforms for sports.

What I most valued from attending a boarding school is interacting with the smartest and brightest indigenous kids from across the country. Boarding schools bring together teens from many of the hundreds of tribes that still exist across America. I have friends from the Navajo Nation, the nineteen Pueblos, and the Mohawk tribe. Even if they’ve had good educations, many Native American youth experience serious problems. These include some of the highest rates of diabetes, teen suicide, domestic violence, drug use and graduation rates of any minority group. In 2014, only 67% of native youth graduated from high school, compared to the national average of 80%. Many live on rural reservations where there is a lack of access to technology, health care, stores, and even food. They are often sheltered from the rest of the world. Everything beyond the reservation is uncharted territory.

It is difficult for some young indigenous people to understand the complexity of the outside world, as they also have to balance the traditional and cultural aspects of life. We are wary of outsiders, as cultural preservation is what distinguishes us from other people. Some of us still speak our native tongues which have been preserved for thousands of years. This is something that we vow to protect, but as the elders get older, youth are losing the desire to learn the language and traditional values. Only 1.4% of those under 30 in my tribe speak our native Jicarilla-Athabaskan language.

Besides culture and tradition, the glue that keeps Native American youth together is family. We have large extended families which support each child, especially in times of need. My first cousins, Davin and Jerren, made a brave decision to leave their home with an alcoholic mother on the Jicarilla Apache Reservation. They now stay with our grandparents who love and take care of them. This love makes all of us interconnected. 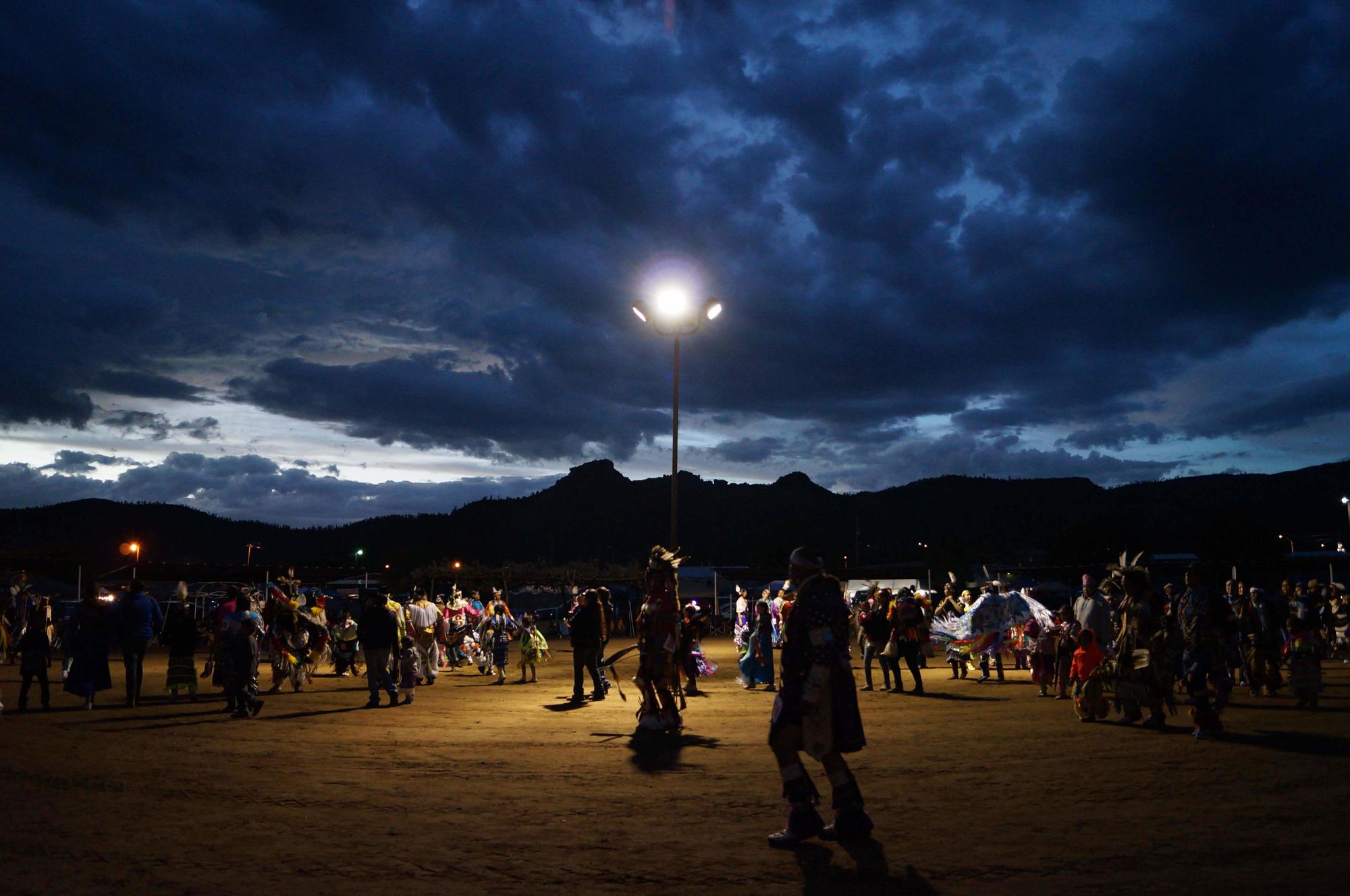 Even as we strive to respect our heritage, we are changing with the times. As a group, we are tolerant about other types of people if we take the initiative to understand them and respect them. During my time at the Santa Fe Indian School, I was the founder of the gay/straight alliance. This was the first LGBTQ group in the school’s history. Other students had tried to start one in the past but it hadn’t worked. I feel like there should be more visibility for native youth who feel different.

We in the native youth community celebrate together, we cry together, and we experience important events with each other. The young people are the most important aspect of a Native American community; they are the keepers and preservationists of what defines us as a people. We face obstacles from addiction to the loss of our culture, but our generation is trying to overcome them. I dream of helping indigenous youth attain a higher form of education, to explore the world. And then, to come back to their communities to improve tribal life through information, love, and compassion.