When is cultural appropriation OK? Never, say some Native Americans

IMDiversity 5 years ago Comments Off on When is cultural appropriation OK? Never, say some Native Americans 4.3 K 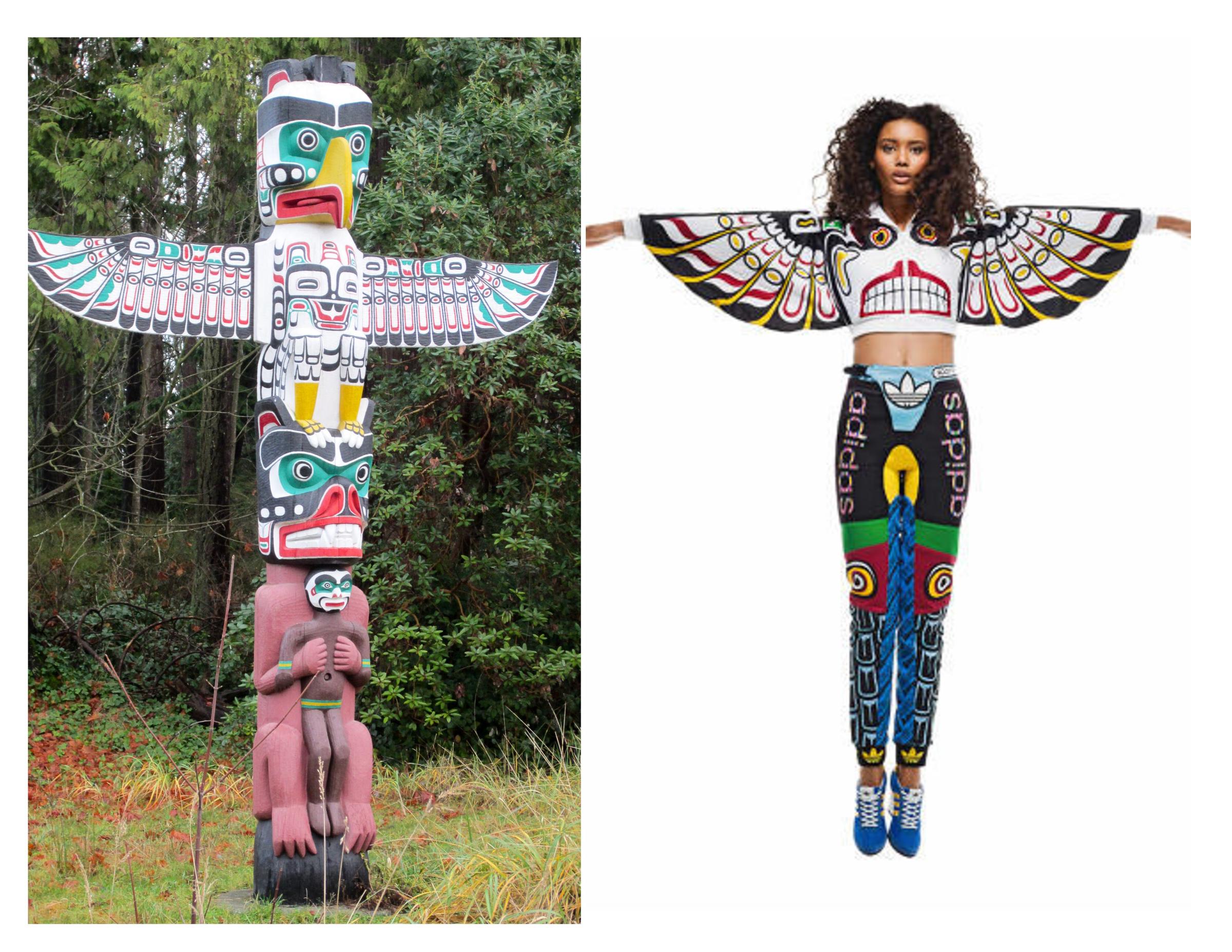 The Indian Arts and Crafts Act of 1990 makes it illegal to knowingly sell non-Native made goods as authentic Native American art or craft. More than 600 fraud cases have been filed since the law’s enactment.

But the IACA doesn’t apply to the more widespread practice of borrowing and adapting Native imagery, themes, or traditional cultural expression on a range of commercial products. 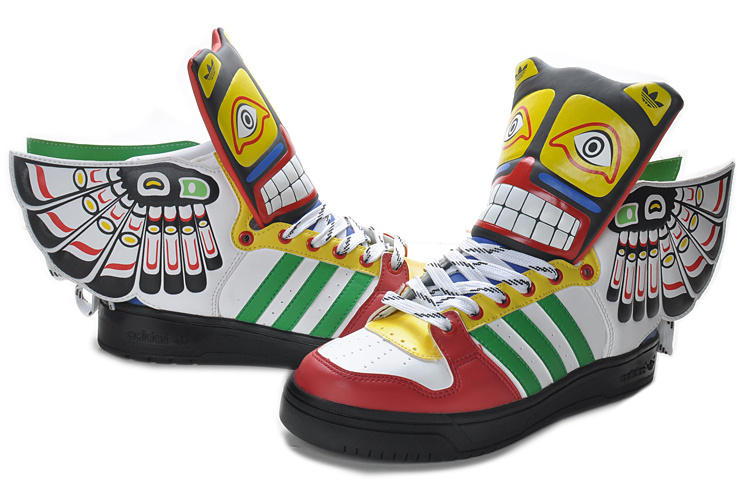 Traces of Seattle’s Native American heritage are everywhere, from the Seahawks logo to totem poles at the Pike Place Market.

After all, Seattle is the only major American city named for a Native American chief.

Which is why the tens of thousands of tourists who visit Seattle tend to carry home mementos — T-shirts, mugs, fine art — adorned with Native American designs or logos.

But much of that booty is faux-Indian, ripped off without compensation.

From his sleek shop above the infamous Gum Wall in the Pike Place Market, Gong is trying to subvert the status quo trade in Native-themed arts and crafts. This is a big business in the Pacific Northwest, and Gong believes Native Americans should have a larger piece of the pie. 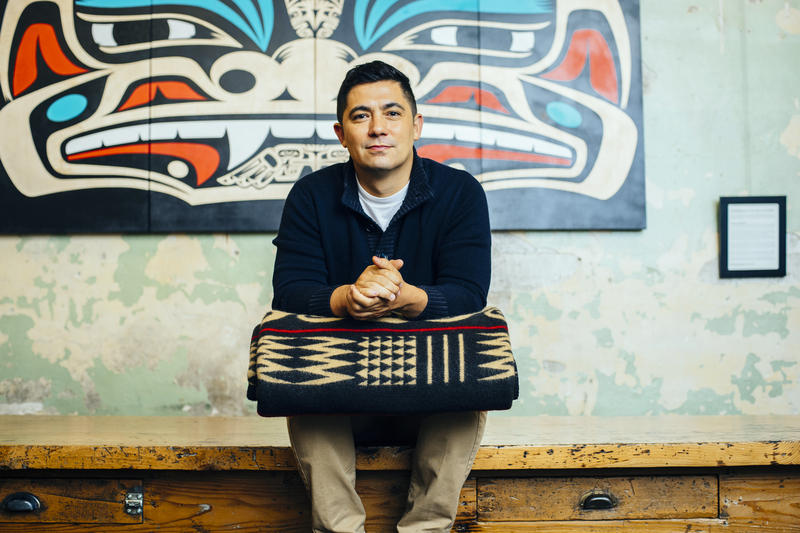 Louie Gong didn’t set out to be either a businessman or an artist.

He was born in British Columbia. His father was mixed race: Chinese and Nooksack; his mother was white. Gong spent his early years in Canada with his paternal grandparents, but he and his father moved to the Nooksack reservation near Bellingham when he was 10 years old. That’s when he first realized he wasn’t like the other kids. 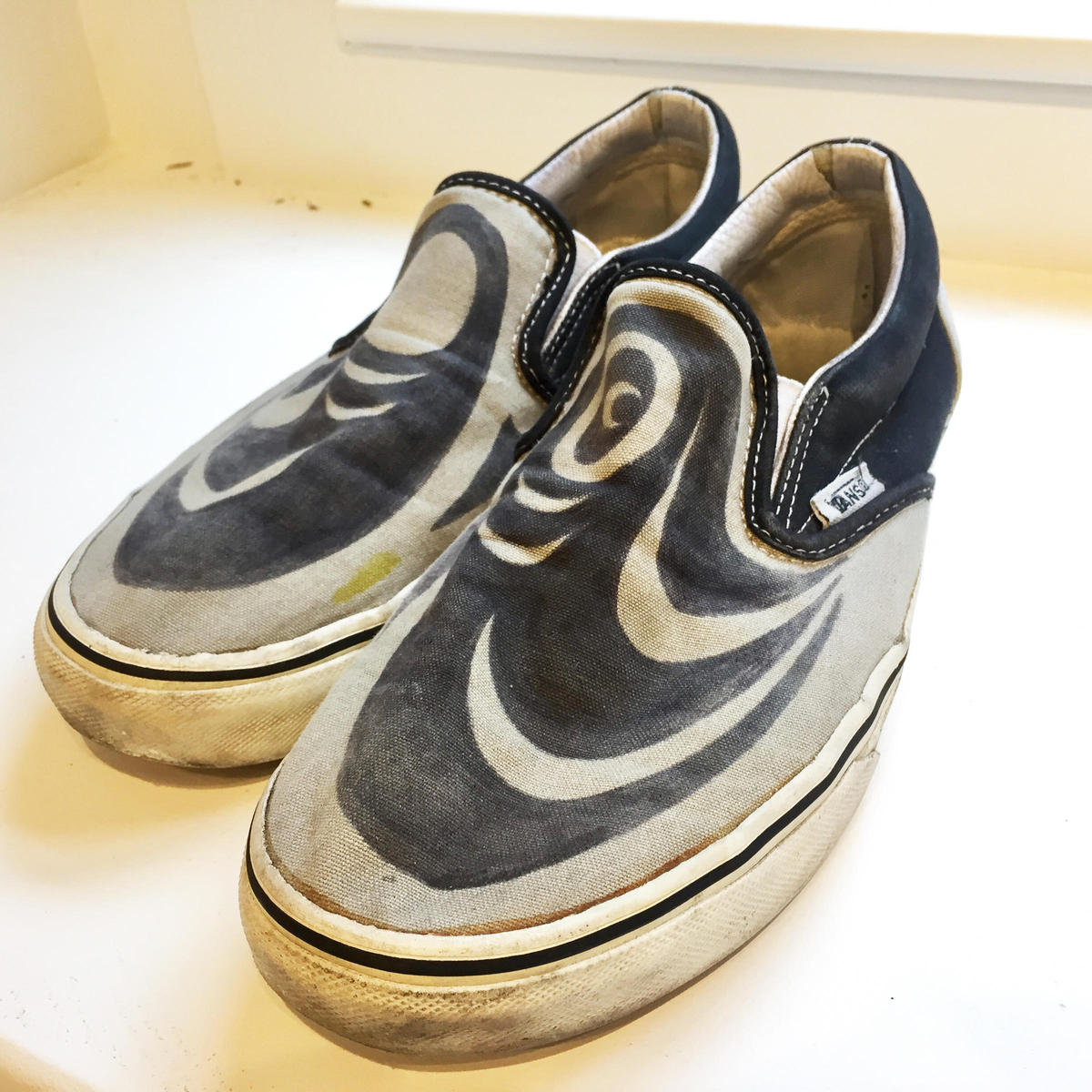 He took the path of least resistance by keeping a low profile and trying to stay out of trouble.

Gong’s childhood was complicated by the fact that he didn’t live with his mother, who had a mental illness.

“My most vivid memories are riding in the car with my aunt and grandma and seeing my mom on the street digging for cigarette butts,” he says.

Those early experiences led him to become a mental health counselor. A counseling job with the Muckleshoot nation opened the door to his inner artist.

Tribal members had invited Gong to help decorate drum heads that were to be given as potlatch gifts. “When folks saw I could paint a straight line, they gave me the drums and said, ‘Hey Louie, you paint ’em.’” 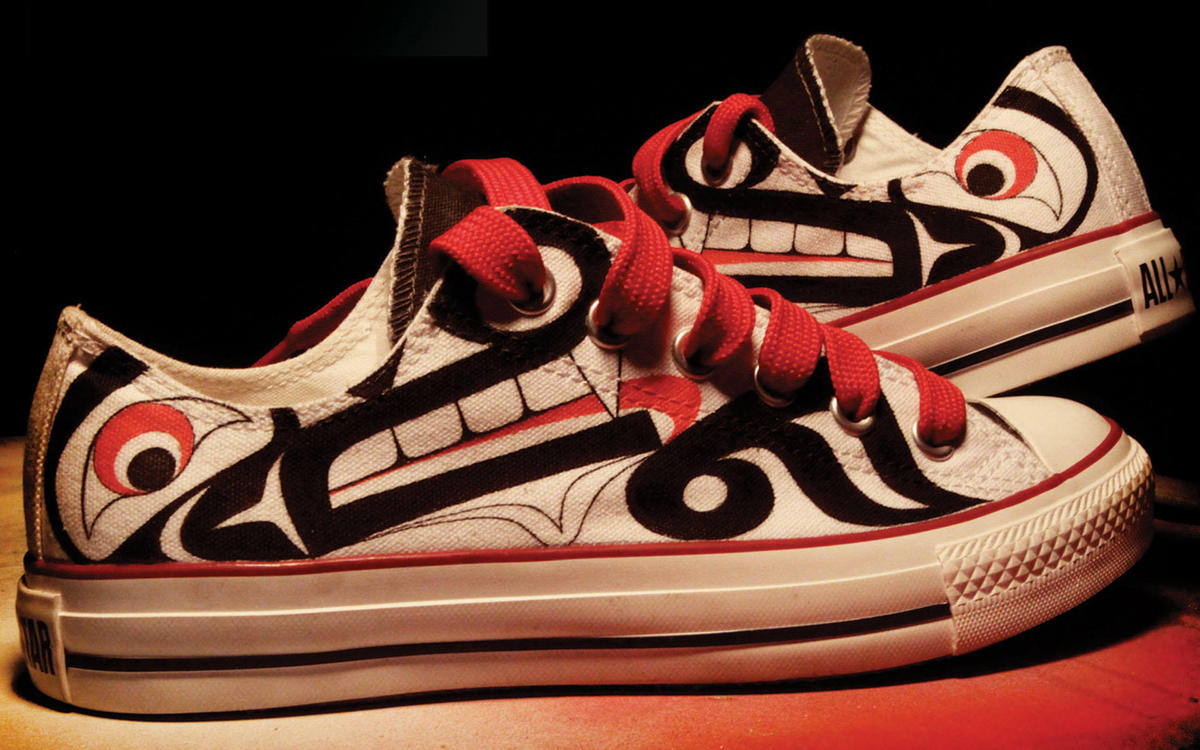 Gong had never done anything like this, although he’d grown up surrounded by tribal art and imagery.

Painting drums unleashed Gong’s awareness of design in everything from the taillights of the cars in front of him on the highway, to people he saw on the streets.

But his professional artistic career started with a pair of Vans shoes.

Gong was in his mid-30s, gainfully employed, and he figured he was entitled to a pair of the shoes he had dreamed of but couldn’t afford as a kid. He bought a pair of plain gray Vans but never wore them.

One day, lolling on his couch watching “The Simpsons,” Gong picked up his Vans and a black Sharpie and doodled a Coast Salish design on the shoes.

He wore those shoes to the office the next day and his co-workers flipped for them. Everyone wanted a pair. Soon he was advertising his custom-designed shoes on social media, and had more customers than he could handle.

By 2016, Gong’s product line included everything from skateboards to cell phone cases to woolen blankets. He calls his company Eighth Generation, a nod to the Native American artists who came before him. Gong won’t talk publicly about sales figures, but suffice it to say business at Eighth Generation is very good.

For Gong, that’s a metaphorical dope slap to all his non-Native competitors. 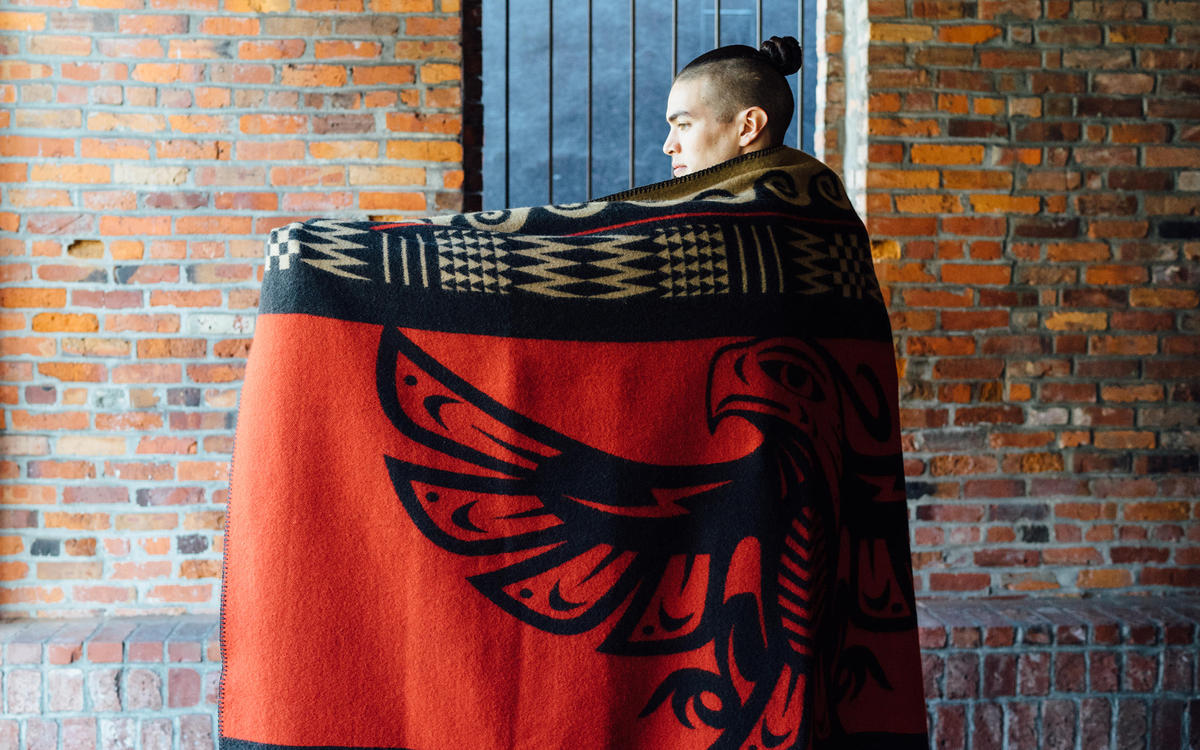 The commercial market in Native American arts is regulated by the federal Indian Arts and Crafts Act.

Originally written in the 1930s, the law was intended to foster economic development on Native American reservations. It wound up fostering a multi-million dollar industry, and many non-natives wanted in. By the end of the 20th century, they were manufacturing — and selling — products with Native-style designs, from rugs and silver jewelry to ersatz wooden masks.

So Congress revised the Act in 1990. According to Seattle attorney Gabe Galanda, amendments were intended to enforce the law “against non-Indians who would perpetrate fraud by misappropriating or counterfeiting Indian arts and crafts.”

But the Indian Arts and Crafts Act doesn’t apply specifically to the more widespread appropriation of Native themes and designs for use on everything from toys to high-end designer clothing.

Kathryn Bunn-Marcuse, the curator of Native American art at the Burke Museum on the University of Washington campus, says cultural expressions like these aren’t covered by U.S. copyright law.

“The concept of copyright comes out of a very Western framework of intellectual property,” Bunn-Marcuse explains. “We do not have in Western copyright law the ability to copyright something that comes out of a community setting.”

This is the quintessential example of the institutional power imbalances in our society, according to Louie Gong.

“You don’t have to look far to see how changes in power could lead to changes in the law,” he says.

Gong doesn’t expect changes in the law anytime soon. He’s advocating for a sort of retail social change. Gong believes shopping for Native-themed arts and crafts should involve the same kind of ethical choices we make when shopping for food or energy-efficient cars. He believes those choices can effect significant social changes.

“We’re not asking for charity or sympathy,” he says. “We’re asking you to reflect on your values and decide whether our business practices are more appealing.”

When he looks at the huge non-Native market for mass produced clothing, housewares and toys adorned with Native-themed designs, Gong sees money diverted from the pockets of the rightful creators of those designs. 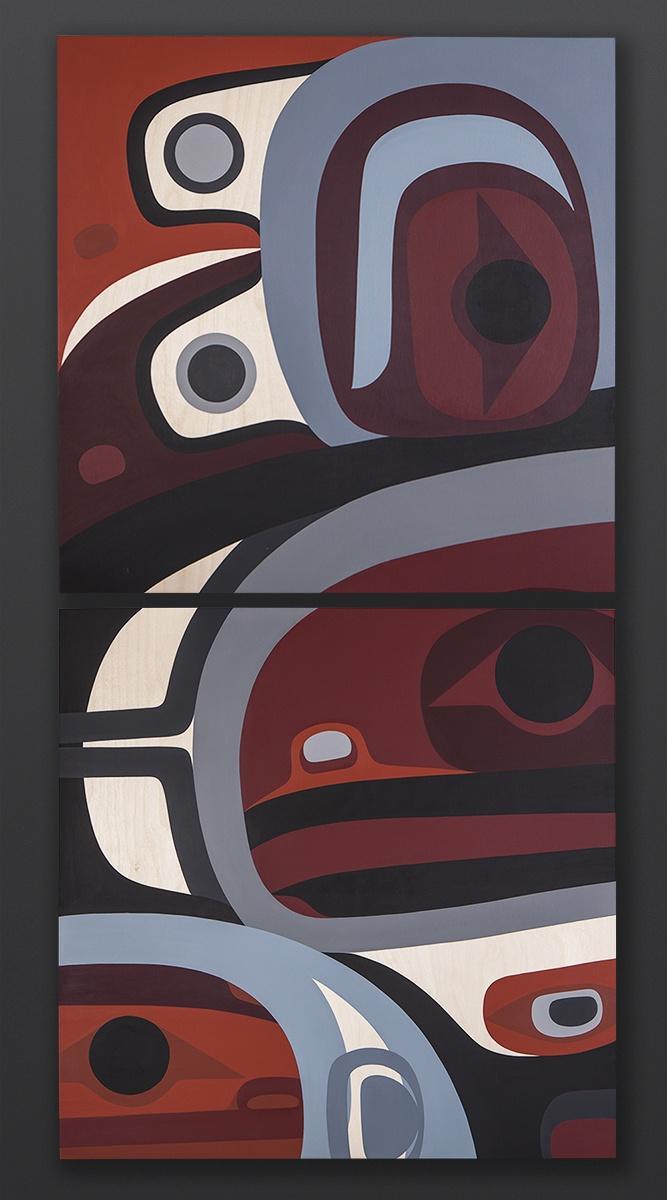 “There’s a healthy way to be inspired by Native themes,” Gong says. “But those healthy ways don’t include Googling ‘Native art,’ finding something you like, changing the colors and throwing it on a product.”

Gong says if big corporations want to use Native designs, they should hire Native American artists or directly license their work. Unfortunately, many of these artists lack the business savvy to market themselves. So Gong has started a program to teach the ins and outs of marketing their art. He calls it “Inspired Natives,” a play on the label that identifies non-Native work.

So far, Gong has contracted with four Native artists from around the U.S. to help them “shift from the handmade or gallery model of selling art toward an arts entrepreneurship model.”

“I pick up these artists like hitchhikers,” he says laughing.

He’s teaching them what he’s learned about licensing agreements and deal negotiation, and he’s selling their designs through Eighth Generation.

This is social activism, capitalist style, which makes sense to Gong, who has set his sights beyond the Seattle tourist market. 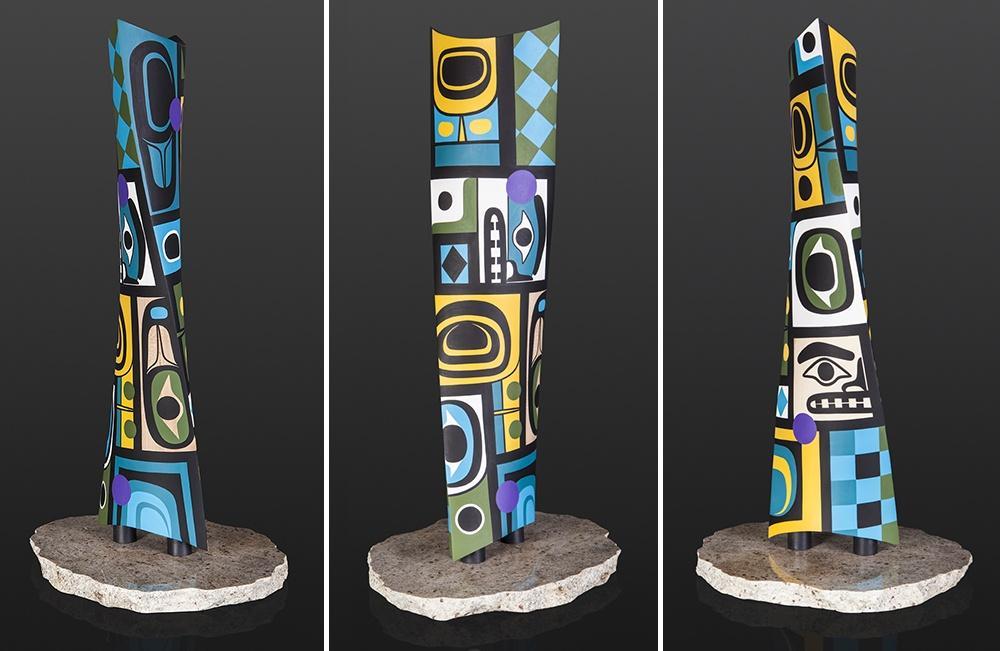