IMDiversity 5 years ago Comments Off on Why higher ed needs to get rid of the gender gap for ‘academic housekeeping 1.1 K

Academia requires a lot of work outside the lecture hall. Matej Kastelic/Shutterstock.com

With the academic year entering full swing, I find myself concerned about the quality of my female colleagues’ lives as they face a mountain of what is known as “service work” in addition to their teaching and research responsibilities.

As a professor of education and public policy, I’ve witnessed firsthand how women in academia do more of this institutional housekeeping, such as serving on job search committees or monitoring degree programs, than their male counterparts, mirroring the way many working women do more to take care of their families at home than their employed husbands.

Devoting too much time to these activities can influence a scholar’s career. Because tenure and raises tend to reflect factors like research and teaching more than service, a gender discrepancy can mean that female professors could earn less and receive fewer promotions overall.

That is why I wanted to research the extent to which this tendency pervades college campuses.

To document the gender gap, I teamed up with Victor Borden, another professor who researches higher education.

We focused on routine and unpaid tasks performed by rank-and-file professors, rather than the deans and other administrators who get compensated for this kind of work. What we found confirmed our suspicions.

Our data came mainly from a detailed 2012 survey of around 1,400 tenured and tenure-track faculty members at two public research campuses of a midwestern university system, which we were not allowed to identify.

When we statistically controlled for rank, field of study, and race and ethnicity, we found that women tend to do significantly more service work than men. As we explain in the journal Research in Higher Education, the detailed data showed that women do about 1.5 more of these often time-consuming assignments than men per year – an average of 10.2 for women versus 8.7 for men.

We detected this general pattern across all fields and departments. However, some gender gaps stood out more than others. For example, women working in science, technology, engineering and math – also known as the STEM professions – performed roughly three more service jobs per year than men – double what we found overall.

The imbalance was also striking within the liberal arts, where women do 2.5 more of these tasks per year than men.

We found that the gender imbalance stems largely from “internal” service to the department or institution, commitments such as taking part in meetings and belonging to committees that, say, design and run academic programs, admit students or handle recruitment. Women also did slightly more off campus, like serving on the board of a professional association or editing a journal.

Data from another source – the 2014 Faculty Survey of Student Engagement – reinforced the findings from the two campuses. Those data, drawn from nearly 7,000 tenured or tenure-track faculty members from more than 140 colleges and universities, indicated that women reported devoting approximately 36 more minutes per week to service work than their male counterparts.

It’s hard to pinpoint exactly why these disparities exist. As I’ve observed in my own experience, women may be asked to do more, may be less comfortable saying “no” to requests or may volunteer more because they’re unaware that the men around them are doing less.

One thing that is clear is how closely the overall phenomenon mirrors gender imbalances in the home. Other studies have shown that female faculty do more housework at home than their male counterparts and have a harder time achieving a healthy work-life balance.

Another good question is how deeply this gender gap hurts women in academia. Does having women do more “academic housekeeping” than men hinder their careers? After all, serving on too many committees leaves female professors with less time to do research and teach. That is, unless they compensate by working more hours than men.

It’s plausible. Prior research suggests that a number of gender imbalances in academia exist. Studies have already made it clear that women in academia generally earn less and command fewer resources such as research space on the job. They are less likely to be promoted than men to the rank of full professor, even after controlling for productivity and human capital.

Although I haven’t formally studied the effects of doing too much service work, it’s logical to assume that it can disadvantage women in academia by sidetracking their path to success. 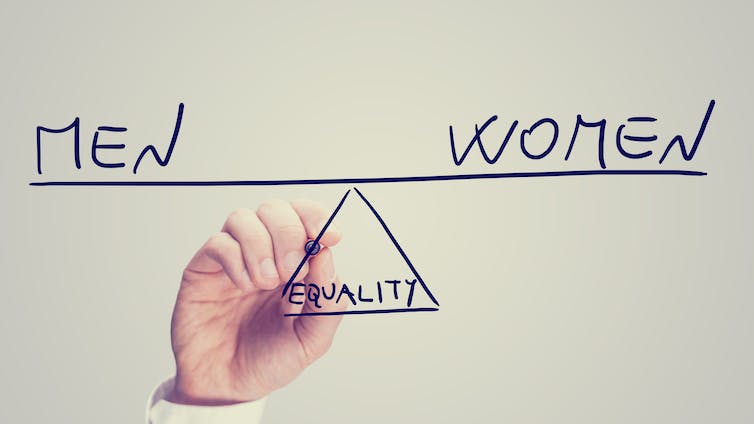 Research has found other gender gaps in academia. Gajus/Shutterstock.com

There are, however, relatively easy steps colleges and universities can take to fix this problem.

First of all, they can simply acknowledge and raise awareness about this issue by making all service assignments public knowledge.

Department chairs, for example, could post detailed lists of everyone’s service commitments for all faculty to see, making any imbalances glaringly obvious. Once faculty are conscious of the gender norms, they will start to modify their behavior.

Senior female professors could model self-restraint and mentor junior female faculty members in learning how to say “no” to extra requests.

In addition, higher education institutions can hold department chairs and university officials accountable for achieving gender parity. Provosts and deans could – and should – monitor the distribution of service assignments to ensure equity.

Schools shouldn’t bury this problem or handle it quietly. It belongs at the top of agendas for discussion at faculty meetings, seminars and other academic venues. It’s important to raise awareness among both women and men until solutions have been implemented and the problem has been resolved.

There’s no reason why a professor’s job should be different for women and men on the same campus. Simply making faculty aware of this gender gap and holding their schools accountable would go a long way toward leveling the playing field for women in academia.