Women Benefit When They Downplay Gender

IMDiversity 5 years ago Comments Off on Women Benefit When They Downplay Gender 1.5 K

Ashley Martin, an incoming assistant professor at Stanford, and Katherine Phillips, a Columbia professor, asked people to rate their agreement with varying statements about the importance of gender differences.

They found that women who believed in focusing on men’s and women’s similarities (“gender blindness”) felt greater power and confidence than women who advocated celebrating women’s distinctive qualities (“gender awareness”). The researchers’ conclusion: Women benefit when they downplay gender. 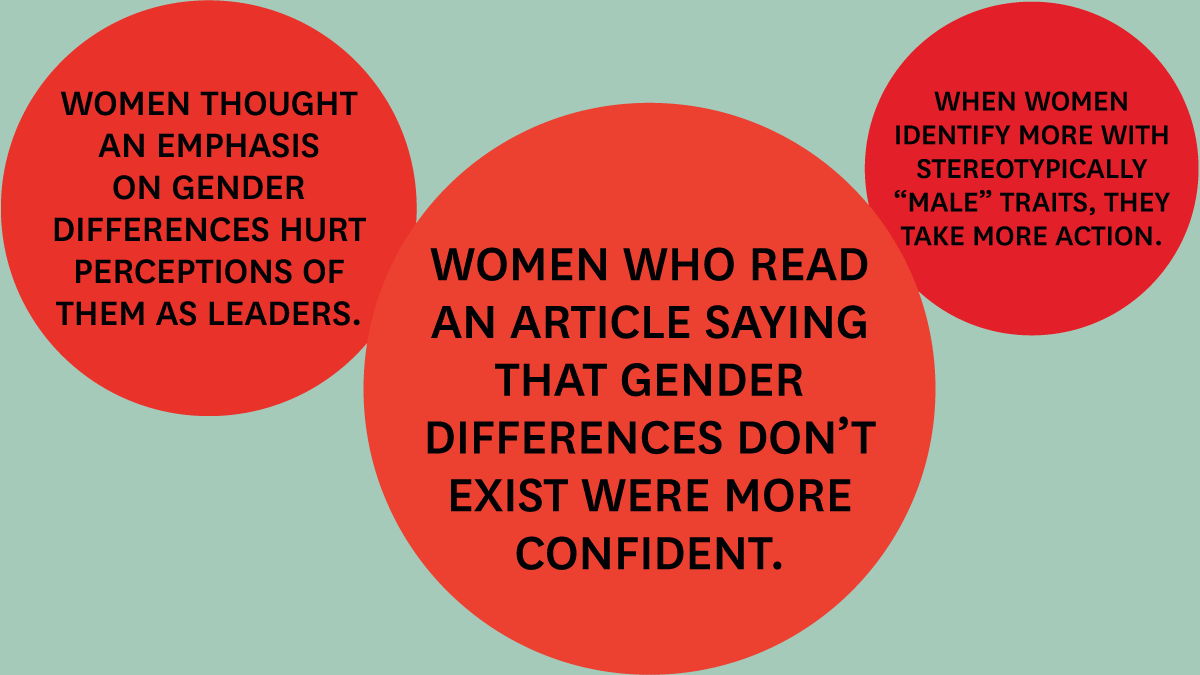 Martin: Across this study and four others, we saw the same pattern: Downplaying differences made women more confident. They thought they could overcome challenges at work. They felt comfortable disagreeing with others. They said they would take more risks, take initiative, negotiate. These effects were strongest in male-dominated environments.

HBR: What does it mean to downplay gender?

Gender blindness and gender awareness are both strategies for achieving equality. Awareness is a set of beliefs or practices that promote acknowledging and embracing gender differences. Gender blindness, obviously, is the opposite, but it doesn’t actually mean ignoring differences. It means deemphasizing them, seeing them as less important than other factors. It’s about focusing on similarities but also about individuality: what makes someone unique as a person rather than what makes someone different as a woman. Both strategies are well-intentioned, but there’s uncertainty about which one is better.

It sounds as if you’re saying gender blindness is.

Our findings suggest that in certain contexts it is. Blindness removes the “male” connotation from traits and behaviors like assertiveness, competitiveness, and risk taking, which are necessary to get ahead at work. “Ungendering” these qualities makes women more likely to recognize them in themselves and to feel more confident.

It’s a little sad to hear that women have to downplay their gender to be better regarded at work. Haven’t we gotten past that?

Gender blindness is counterintuitive, because we’re often told to celebrate diversity. But embracing diversity is not at all the problem. The problem is really the types of differences we emphasize.

Women thought an emphasis on gender differences hurt perceptions of them.

Which differences are problematic?

I’m talking about fundamental personality, interest, and skill-based differences, which, to be honest, are really stereotypes around what men and women are supposedly good at and what they like. Our first study found that when women are asked to think of gender differences, they end up listing things like agency, assertiveness, independence, competitiveness, and action taking. We still tend to associate those qualities with men and with leaders. And we found that women thought an emphasis on these “differences” negatively affected people’s perceptions of them as leaders.

Absolutely. We don’t want to downplay issues that exist, like the systemic inequality women face. It’s been shown that meritocratic policies, which don’t recognize that people face different treatment and have different opportunities at work, are detrimental to women and minorities. If you’re blind to those differences, you’re ignoring systemic problems within your organization that lead women to feel less confident. You’re saying, well, if it’s not the system, it must be the women. That’s harmful.

Gender blindness needs to be applied very carefully. It’s about eliminating the idea that women have different skills and abilities, because they don’t.

But doesn’t downplaying your gender feel a little…inauthentic?

Not at all. Gender blindness doesn’t mean that women should act more like men; it diminishes the idea that certain qualities are associated with men and women. In fact, I think gender awareness has the same risk of promoting inauthenticity, especially if women don’t necessarily identify with “feminine” traits and behaviors. Highlighting gender differences and then telling women—and men—to bring their authentic selves to work assumes that their authentic selves revolve around their gender. Gender blindness allows people to be truly authentic, rather than defining what authenticity means for men and women.

Is gender blindness something women can adopt to become more confident?

Yes, we tested this. We had people read a newspaper article about new findings on how to achieve workplace equality. Half of them read an article saying that gender differences don’t really exist and we should be focusing on similarities to achieve intergroup harmony. The other half got an article that said we should be emphasizing these differences, that women have all these great skills to bring to the table, and by embracing them we can achieve harmony. Afterward, women who read the blindness message were more confident. They rated themselves higher on items like “I can overcome challenges” and “I feel comfortable disagreeing with people or challenging others at work.” That was compared with both their baseline condition and the awareness group.

Did you study men?

How did you see confidence translate into actual behavior?

We rated people’s responses to questions about a number of scenarios. For example, if a woman was given a certain hand in blackjack, would she take another card? In a pay negotiation, would she try for her dream salary? We found that when women identify more with stereotypical male traits, which they’re more likely to do in a gender-blind organization, it leads them to feel more confident and take more action.

Is gender blindness the same as racial color blindness?

No, though we drew a lot of the language and tests we used from the research on race. But the dialogue we’re having about race, at least in America, isn’t the same as the one we’re having about gender. When we tell people to be blind to race, they often ignore systemic and structural differences in the way people of color are treated, which is why we might see benefits from being aware of race. A lot of the differences that we’re ignoring with gender blindness aren’t systemic; they’re stereotypes. So in theory color blindness is analogous, but in practice it’s not.

How can managers espouse a gender-blind approach?

They can avoid reinforcing stereotypes in the way they assign tasks and responsibilities and develop and interact with their subordinates. For example, women often get asked to do office housekeeping or emotional work because people think they’re better at those tasks. People make assumptions about the interests and desires that men and women have. Gender blindness minimizes those assumptions so that each person is treated as an individual.

How should I downplay my gender when I go to work?

I wouldn’t tell anyone to mute their gender identity or reject femininity. You just want to remember that your gender shouldn’t limit you. Men and women are not naturally better suited to different roles, and men and women aren’t better or worse at certain things. It’s important to remind yourself that you are just as entitled to opportunities and advancement as anyone around you.

Nicole Torres is an associate editor at Harvard Business Review.