NSF Releases New Report on Women, Minorities, and Persons with Disabilities in Science and Engineering

IMDiversity 6 years ago Comments Off on NSF Releases New Report on Women, Minorities, and Persons with Disabilities in Science and Engineering 2.1 K

A new report from National Center for Science and Engineering Statistics, a division of National Science Foundation, provides data on the U.S. science and engineering enterprise. 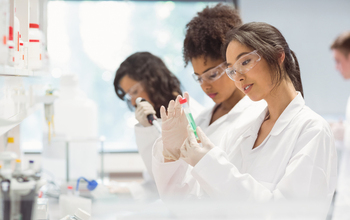 The report is part of NSF’s congressionally mandated mission to broaden participation in science and engineering.

The report shows the degree to which women, people with disabilities and minorities from three racial and ethnic groups — black, Hispanic and American Indian or Alaska Native — are underrepresented in science and engineering (S&E). Women have reached parity with men in educational attainment but not in S&E employment. Underrepresented minorities account for disproportionately smaller percentages in both S&E education and employment.

Congress mandated the biennial report in the Science and Engineering Equal Opportunities Act as part of the National Science Foundation’s (NSF) mission to encourage and strengthen the participation of underrepresented groups in S&E.

“An important part of fulfilling our mission to further the progress of science is producing current, accurate information about the U.S. STEM workforce,” said NSF Director France Córdova.

“This report is a valuable resource to the science and engineering policy community.”

The digest provides highlights and analysis in five topic areas:

“WMPD is more than just a single report or presentation,” said NCSES Director John Gawalt. “It is a vast and unique information resource, carefully curated and maintained, that allows anyone (from the general public to highly trained researchers) ready access to data that facilitate and support their own exploration and analyses.”

Key findings from the new digest include:

– Since the late 1990s, women have earned about half of S&E bachelor’s degrees. But their representation varies widely by field, ranging from 70 percent in psychology to 18 percent in computer sciences.

– Despite two decades of progress, a wide gap in educational attainment remains between underrepresented minorities and whites and Asians, two groups that have higher representation in S&E education than they do in the U.S. population.

– Women’s participation in the workforce varies greatly by field of occupation.

– In 2015, scientists and engineers had a lower unemployment rate compared to the general U.S. population (3.3 percent versus 5.8 percent), although the rate varied among groups. For example, it was 2.8 percent among white women in S&E but 6.0 percent for underrepresented minority women.