Women scarce in the journalism field

IMDiversity 4 years ago Comments Off on Women scarce in the journalism field 1.7 K

When you look at a byline from an article, how often do you read a woman’s name?

If you can recall doing so, how many of those had diverse last names? Chances are you can’t recall that either.

Journalism is supposed to be a field of non-bias and objectiveness. Journalists write to include everyone’s side, but studies have shown that the field isn’t giving everyone a fair chance to work in the profession.

Journalism is vital in keeping people connected to the whole world, however in the hiring area, gender and race seem to be an exception.

There is a marginalized presence of women and minorities in the media as reporters.

Since the beginning of journalism, men have always dominated the field. 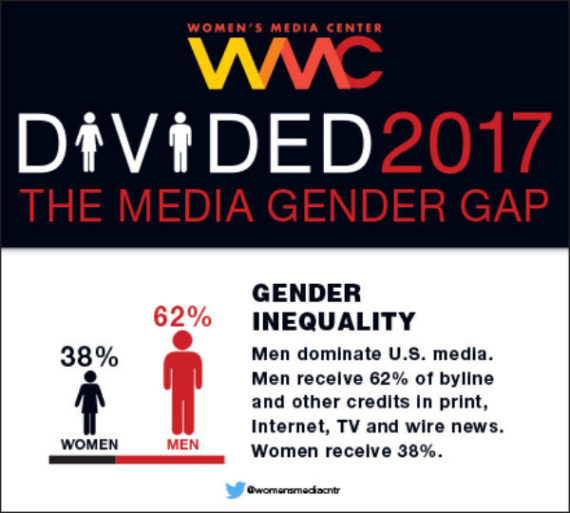 Jasmine Aguilera, an associate producer at Now This Her and former Prospector editor-in-chief, said she feels as though women and minorities are underrepresented in the newsroom, but they need to be present in order to prevent stereotypes from being falsely included in the news and to be able to concisely report on issues that involve their gender and race.

“Has that newspaper even considered hiring a more diverse staff that could tell stories that better reflect its own community?

Most of the time I’d say no. When I was in Dallas (at the Dallas Morning News), nearly half of the entire city is Hispanic, yet the newsroom wouldn’t reflect that,” Aguilera said. “I think diversity is the key to these newspapers surviving in these cities that are probably more diverse than they even realize.”

The Women’s Media Center takes yearly reports in the U.S. of women in the media in jobs such as writers, creators, television producers and reporters.

In 2017, the WMC reported that overall men receive 62 percent of bylines, while women only receive 38 percent. Some of the news outlets included in the study are The New York Times, USA Today, New York Daily News, The Washington Post and The Wall Street Journal.

Zita Arocha, Borderzine director and a multimedia journalism professor at UTEP, has worked in different newsrooms across the country and recalls the lack of diversity and women in leadership positions.

“I’ve worked at three newspapers and in all of them, the newsroom itself was populated by women reporters. Usually the editors and the top editors running the newsroom were all male,” Arocha said.

Men have always held more jobs than women in the media. Most of those jobs being a higher position. 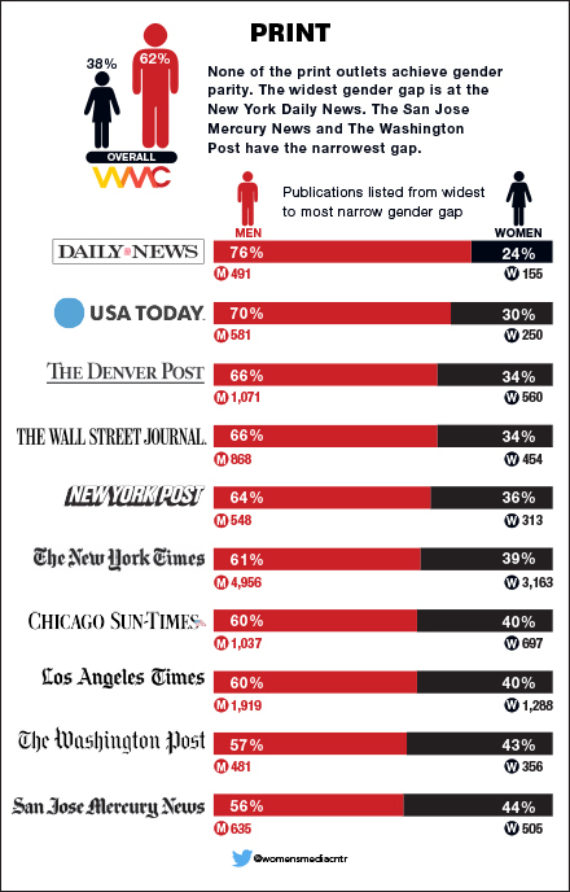 The Guardian published an article in 2012 called, Men Still Dominate Newspapers in Journalism. It reported the imbalance of gender in the top positions at newspapers. Author Roy Greenslade said, “It is still a man’s world in national newspaper journalism. That gender divide penetrates the whole newspaper industry with women making up just 30 percent of all newspaper journalists.” He goes further by concluding from theirstudy that women are less likely to be in senior positions.

Arocha said she experienced this gender bias while working for the Washington Post.

“That’s been a challenge my whole life. I was never offered the opportunity to move into editor, editing or to receive any kind of training to become a type of editor,” she said. “So it was definitely a challenge and disheartening to say the least.”

The pay gap between men and women working in journalism is significant, and it only grows more according to race. Analysis from the Independent Association of Publishers’ Employees 1096’s found that full-time women at Dow Jones properties, some of which include The Wall Street Journal, MarketWatch and Barron’s, make about 87 cents for every dollar full-time male employees.

Tracy Patrick Roy, managing editor at Las Cruces Bulletin and former Prospector editor, said it is hard to know what everyone else’s salary is, but she knows that the wage gap exists and has fought for fair compensation.

“I know that I’ve had to work a lot harder to get the salary that I want, just in terms of asking for it. Just in terms of the wage gap, there are a variety of factors that play into that,” Roy said.

They also found that male staffers with up to five years of experience earn 13.5 percent more than female staffers at the same level.

During her time at the Washington Post about 20 years ago, Arocha was the only Latina at the Post and the only one who spoke Spanish. It was at the time when she saw the lack of coverage in Latino communities.

“The editors, frankly, could care less about the issues of the Latino community in the Washington D.C. area,” she said. “There was absolutely no interest in covering the issues or concerns of that community of how they’re contributing to the larger city.”

Aguilera said she faced a similar situation while working in Dallas.

“I had one publisher, when I asked if the company was headed in a new direction, ‘is there a chance to increase diversity at this newsroom?’ And he said, ‘well you know, diversity isn’t really at the forefront of our thoughts right now. Right now we’re worried about budgets and all that stuff. We’ll worry about diversity later.’ Essentially saying diversity isn’t that important,” Aguilera said.

She has also found it especially hard to be a part of a field that undermines her talent because of her gender and background.

“Being a young woman, a woman who comes from the Mexico border, whose family comes from Mexico, either your language ability is underestimated, your knowledge on the story, on the topic is underestimated. The sexual harassment is insane,” Aguilera said. “If I’m out on the street just getting man or woman on the street quotes about the weather, something as simple as that, I’m not taken seriously. There have been instances where I’ve been hit on instead of having my questions answered. Men have offered to buy me dinner so that they could do an interview. And it’s so uncomfortable.”

Aguilera also said she faced a lot of misconceptions about her knowledge, about whether she could write English properly.

Situations like these are what prompted Arocha to conduct a study on job satisfaction of Latino journalists in newsrooms. The purpose of the study is to “examine the degree to which Latino/a journalists perceive a sense of satisfaction or dissatisfaction at their current job, either in general market news media or Latino-oriented news outlets.”

“Knowing what I know about conditions within newsrooms, my own experiences and experiences of many fine Latino journalists, both men and women that I know. I very much know first hand what the issues are and what the challenges are to upward mobility in the newsroom,” Arocha said. “I did lead NAHJ for four years. That was one thing that was always on my mind, as far as an issue that needed to be addressed.”

The study is open to all journalists until Dec. 31, 2017 and may be accessed at 2017 “Evaluating Job Satisfaction of Latino Journalists in Multimedia Newsrooms national study.”

In the last 20 years, the gender gap in journalism has remained stagnant. Arocha said that a lack of progression for women, not only in journalism, but also in all fields hasalways been a large issue that has seen no answer.

“I chuckle every time I read an article that says ‘first woman to have x corporation’ and it’s like ‘come on,’ It’s still a big deal when they should already have been there and there should be many in those positions. So it continues to be a huge problem I think in the 21st century,” Arocha said. “When you talk about diverse leadership, often times people think of people of color. But women are right up there in terms of lack of representation in jobs where they can really make a difference as decision makers. Look at the number of women in Congress, in both houses, both the House and the Senate. Look at the number of women on the Supreme Court as judges, it’s pervasive. It’s a pervasive issue.”

While Roy has not experienced any setbacks for being a woman, she acknowledges that it is present in newsrooms and advises women to fight for themselves in order to create a gender balance in journalism.

“My best advice would be for women to be advocates for themselves. Believe in yourself and what you’re worth,” Roy said. “Do your research and know what the salary is and ask for that, ask for more. Just being an advocate for yourself is the best thing you can do as a woman.”