You’d have to be a genius: the problem with ‘brilliance’ and STEM participation

IMDiversity 3 years ago Comments Off on You’d have to be a genius: the problem with ‘brilliance’ and STEM participation 813

By Stanley Dambroski and Madeline Beal

Why do large gender disparities exist in certain fields but not others? Research suggests that many factors perpetuate gender disparities, including implicit and explicit biases, a lack of role models and quality mentoring — and broad stereotypes about gender roles.

NSF-funded researchers are investigating how beliefs about what it takes to succeed in scientific fields may drive career trajectories. These “field-specific beliefs” could play an important role in making women feel welcomed or excluded.

“If we want a world where talented women aren’t needlessly discouraged from pursuing many prestigious and rewarding careers, we need to think more carefully about the career messages we send to women and girls,” said Andei Cimpian, professor of psychology at New York University. 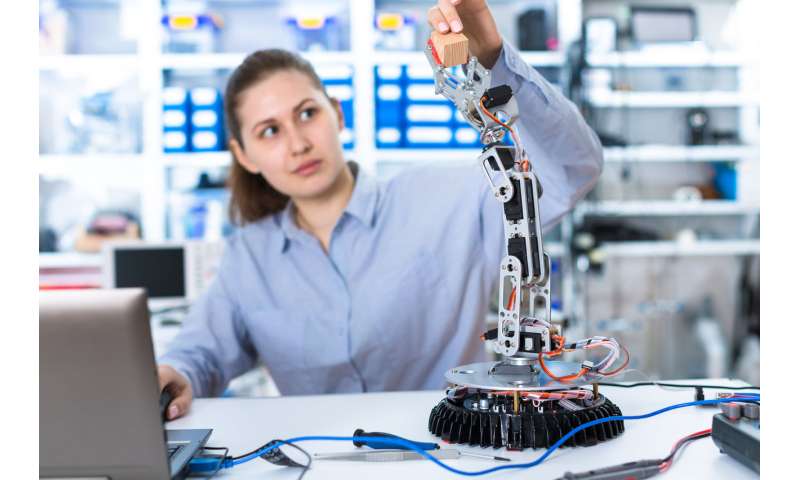 The perception that success requires being a “born genius” may discourage girls and women from pursuing certain academic fields. Credit: Shutterstock.com

From physics and math to philosophy, a perception persists in certain fields that success requires being a “born genius.” This perception is less common in other fields, like biology and medicine, where hard work and perseverance are viewed as the key to success. The emphasis on genius in certain fields likely poses an obstacle to the career advancement of women. This is because, in society, a gender stereotype associates “brilliance” and “genius” with men. For a 2015 study published in the journal Science, Cimpian and Sarah-Jane Leslie, professor of philosophy at Princeton University, led a team that surveyed nearly 2,000 faculty, students and postdoctoral fellows from across 30 academic fields. They found that fields where brilliance or raw intelligence are deemed to be integral to success were the same fields where women have the lowest participation.

“We found academic fields that emphasized the need for raw brilliance were more likely to endorse the claim that women are less well suited than men to be top scholars in the field, and that such fields are less welcoming to women,” says Cimpian.

In a second study published in Science in 2017, Leslie, Cimpian and Lin Bian, a postdoctoral researcher at Stanford University, explored the development of stereotypes related to brilliance in young children. They found that by the age of 6, girls were already less likely than boys to associate being “really, really smart” with their own gender, and they were more likely to avoid activities that were described as being intended for people who were “really, really smart.”

In their latest study, published in the Journal of Experimental Social Psychology, Leslie, Cimpian and Bian were joined by Mary Murphy, professor of psychology at Indiana University, to assess whether messages about brilliance differentially affect women’s interest in certain fields.

The researchers also asked questions about the roles played by belonging — the feeling of being comfortable or accepted in an environment — and anxiety when it comes to interest in certain fields and opportunities. Their findings suggest that women often expect to feel anxious about how others will perceive them, and also feel that they wouldn’t belong in groups where opportunities are framed in terms of brilliance.

“Many people gravitate to fields where they feel they will fit in, where they believe their skills and talents will be appreciated,” Cimpian said. “My worry is that many talented women are looking elsewhere because they don’t believe they would fit in with others in fields that revere brilliance.”

The methodologies used in these studies allowed the researchers to collect data that provided new insights on field-specific beliefs.

“This area of research is incredibly important for the expansion of the STEM workforce,” said Jolene K. Jesse, program director for Research on Learning in Formal and Informal Settings, a division of NSF’s Education and Human Resources Directorate. “In this area of research, a particular challenge has been moving from the laboratory to the classroom, where the best data on learning are available. This team has been able to make progress toward that goal, and the results they’ve published are bringing us closer to understanding the points where these field-specific beliefs and other factors affect women in STEM.”

While the researchers focused on gender disparities, field-specific beliefs may also play a role in racial disparities within academic fields. Many underrepresented minorities are targeted by negative stereotypes about their intellectual abilities, as shown in decades of social psychology research.

“This research gives us a more complete understanding of why disparities in certain fields are so hard to overcome. Research like this has the potential to help us design better programs in schools and organizations, programs that can increase the involvement of underrepresented groups in STEM and ultimately improve our national STEM capabilities,” said David Moore, Developmental Sciences program director in NSF’s Social, Behavioral, and Economic Sciences Directorate.

Related Awards
#1530669 SBP: The Roots of Female Underrepresentation in STEM and Beyond: Exploring the Development of Gender Stereotypes about Intelligence
#1450755 CAREER SBP Creating Equitable STEM Environments: A Multi-Method Contextual Approach to Mitigating Social Identity Threat Among Women in STEM