America’s New Highest Ranking Nerd Is A Black Woman, And She’s Here To Save The Libraries

IMDiversity 6 years ago Comments Off on America’s New Highest Ranking Nerd Is A Black Woman, And She’s Here To Save The Libraries 857

Carla Hayden has just been confirmed as the next Librarian of Congress.

By BY Laurel Raymond

In this Feb. 25, 2004 file photo, Carla Hayden speaks in Seattle. She has just been confirmed as the next Librarian of Congress. CREDIT: AP PHOTO/TED S. WARREN, FILE

On Wednesday the Senate confirmed Dr. Carla Hayden as the new Librarian of Congress, meaning that for the first time in the Library of Congress’ 200 year history, the librarian at the helm — or the reference desk, if you will — isn’t white, and isn’t a man.

Media outlets and book lovers are jubilant over Hayden’s confirmation. Not only does her appointment break color and gender barriers, but it also means that for the first time in over 40 years, the position will be held by an actual librarian, rather than by a scholar. 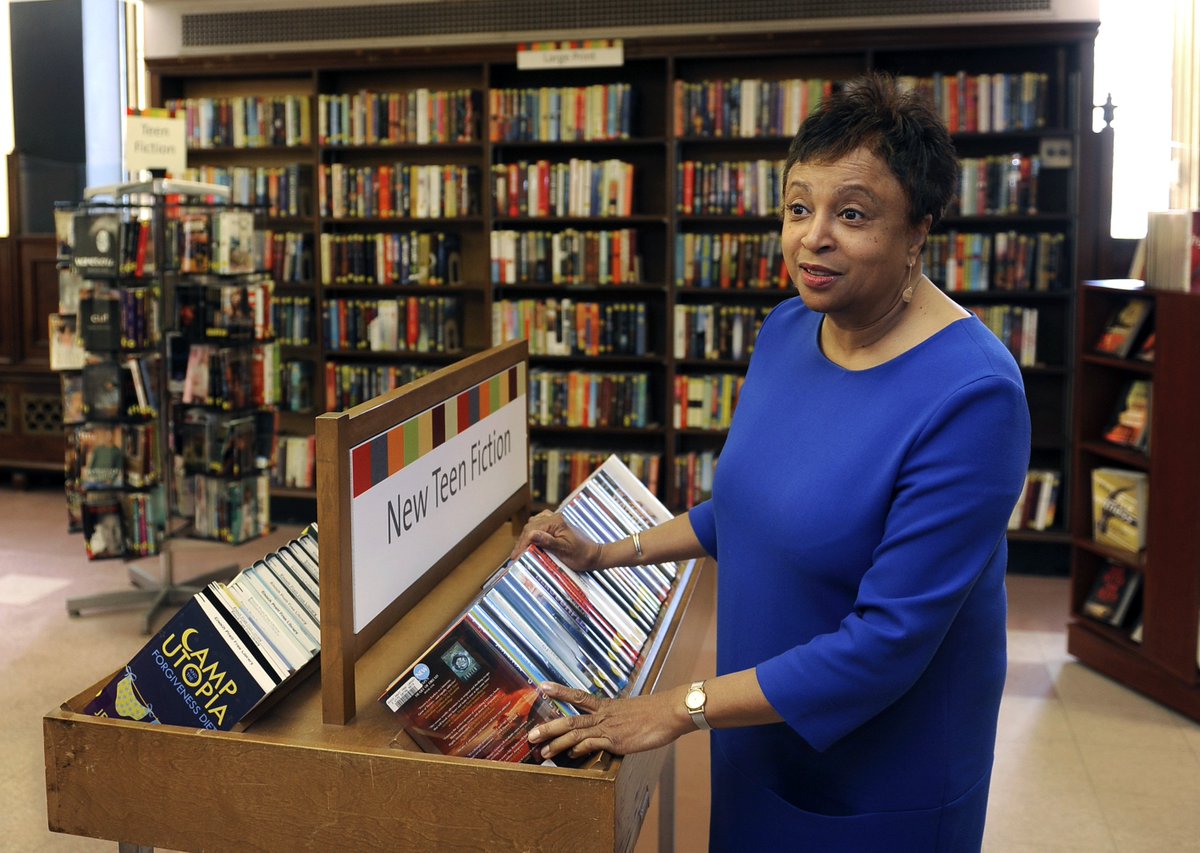 Reading Rainbow ✔@readingrainbow
We’re over the moon that Dr. Carla Hayden has just been approved as the 14th Librarian of Congress! She’s making history & it’s so exciting!

For many, though, the Librarian of Congress is a somewhat obscure position. Most of the work is behind the scenes, and of Presidential appointments, it’s not exactly the flashiest — but it can be incredibly significant.

As the head of the world’s second-largest library (some 160 million works), Hayden will have the power to influence Americans’ access to vast amounts of information. The Librarian of Congress can shape copyright, which affects what media can be personally or corporately controlled, or what can be used freely for, say, editorial or educational purposes. Previous librarians have opened the Library’s reading room to the public, added sections for African books, increased access for users with disabilities, and spoken out against censorship and fought for the free flow of information.

Hayden will also be responsible for choosing the U.S. Poet Laureate, characterized on the Library of Congress website as “the nation’s official lightning rod for the poetic impulse of Americans.” Given a modest stipend and extreme freedom, the U.S. Poet Laureate is a yearly appointment, institutionally charged with increasing the nation’s consciousness to poetry. At a time when the county feels increasingly divided along political, racial, and economic lines, literary art — and encouraging diverse voices shaping that art — may be more important than ever.

In a digital age, though, Hayden’s influence on U.S. institutions could be even more far-reaching.

Libraries, the internet, and the democratic crisis

Libraries are monuments to a cornerstone of a free democracy: A manifestation of the idea that information, and resources to access information, ought to be freely available to all whether or not they can pay for it.

Thanks to internet resources like e-books and Google, however, most information is now always at our fingertips, and the role of libraries has changed. But we still need libraries to help achieve the goal of the free flow of information. For one, most of the information online is stored on digital clouds owned and controlled by corporations — publicly available, but not public. Plus, not every American can afford to pay for internet or for a device to access it on their own.

As a result, as the role of libraries and public spaces declines and knowledge storing moves mostly to private hands, “we might have less access to information in a digital age than in an analogue age,” John Palfrey, director of the Berkman Center for Internet & Society and author of Bibliotech: Why libraries matter more than ever in an age of Google, argued in a book talk at Harvard Law School. “And that would be terrible. That would be, I think, perverse.

The Library of Congress is the foremost library of the American people, headed by an individual — nominated by the president and confirmed by Congress — who serves as the people’s librarian. At a time when the future of public spaces like libraries is uncertain, a strong, relevant guiding example from the nation’s most important library is critical.

But it’s been failing. The previous librarian, James Billington, who was a celebrated Russia scholar appointed by Reagan in the waning years of the Cold War, retired amid a government report finding that progress had stalled. Millions of items were languishing inaccessible in warehouses, and a paltry percentage of the books were accessible to read online.

Hayden may be the perfect person to re-articulate the library’s importance. She comes to Washington, D.C., from Baltimore, where she oversaw the public library system, and is credited with bringing the library into the technical age — a fact President Obama referenced when he nominated her.

She’s also a model of librarians as activists, and an advocate of libraries as a public gathering space for the community. Under her tenure in Baltimore, libraries became places for community members to get help with homework after school or with finding a job. She also initiated a successful lecture series called “Talking About Race,” where community members could come together and create a dialogue around difficult issues.

And Hayden chose to keep the library open during the protests over the death of Freddie Gray, even as the city declared a state of emergency and closed its schools. The library branch nearest the protests — opposite a flaming drug store — became “a refuge for people in that neighborhood,” she recalled when she was later honored for her work during the protests.

“It renewed my faith, and my purpose about what libraries are about,” she said. “When they talk about the age of virtual libraries, the library as a place…as a place…matters.

On top of that, Hayden is an outspoken advocate for freedom of information and civil liberties. As the president of the American Library Association, she led the charge against the Patriot Act — which states that the government can demand library records, including internet search histories, through a secret court order and without probable cause. Hayden noted that a similar tactic was used as a fishing tactic against certain people in the McCarthy era. The relevant Patriot Act clause was later used by the government as justification for broad data collection revealed by Edward Snowden. In 2003, Hayden’s advocacy in this area earned her Ms. Magazine’s Woman of the Year.

“When libraries fight against the PATRIOT Act, or against [mandatory Internet filters], we’re fighting for the public,” Hayden said at the time. “Most of the people who use public libraries don’t have the opportunity to buy books at a bookstore or on Amazon.com. What the library does is protect the rights of all people to fully and freely access information and to pursue knowledge, without fear of repercussion.”

“Libraries are a cornerstone of democracy—where information is free and equally available to everyone. People tend to take that for granted,” Hayden added. “And they don’t realize what is at stake when that is put at risk.”