IMDiversity 6 years ago Comments Off on Call and Email Your Senators – Say No to Jeff Sessions for Attorney General 1.2 K 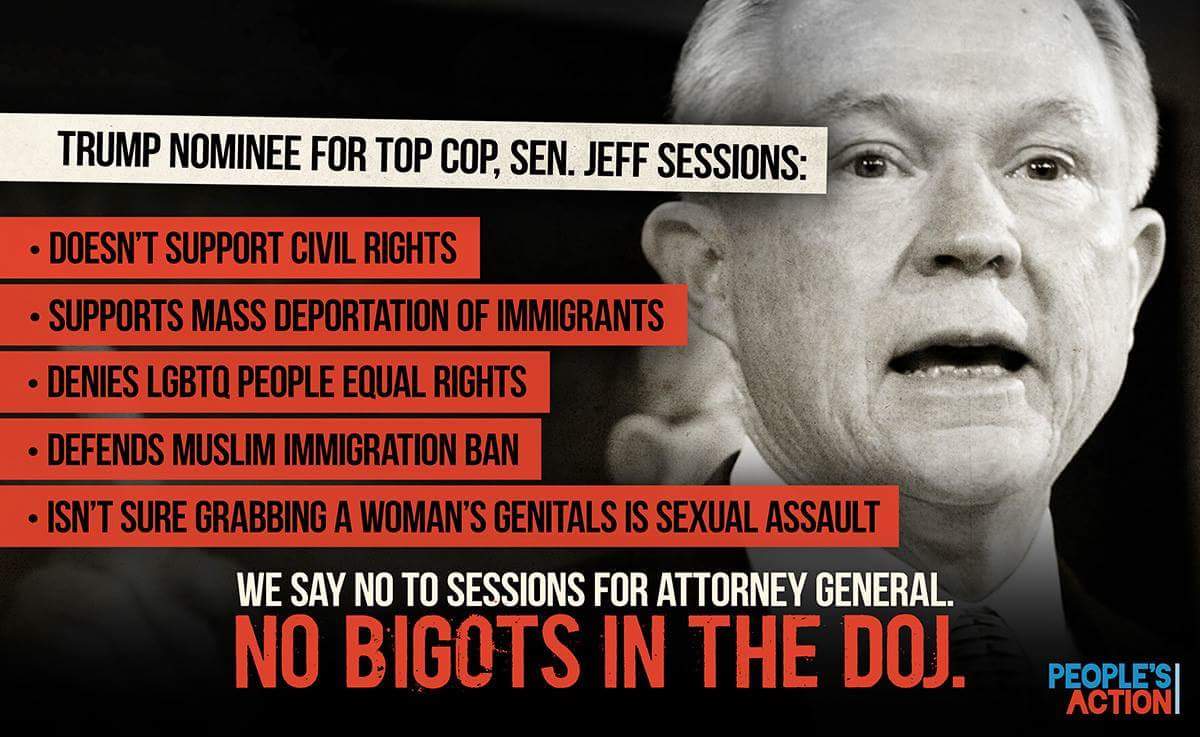 Senator Sessions should not become Attorney General; it is his job to protect civil rights as the nation’s top attorney NOT reverse civil rights, voting rights and women’s rights.

On Monday, January 30th the NAACP will march in Mobile, Alabama to the office of Sen. Jefferson Beauregard Sessions, III and ask him to withdraw his name from nomination for the U.S. Attorney General.

The “Sessions 6” led by NAACP President/CEO Cornell William Brooks joins the Alabama NAACP President Benard Simelton and the Mobile Branch President, Lizzetta McConnell for a March/Rally and then sit-in at his office.

While we can’t all march with them, we can join them in solidarity by calling Senate Judiciary Members as well as our own Senators and telling them to vote NO on Senator Sessions on Tuesday.

You can also send an email to both your Senators.

Senator Sessions says that he has changed but that just isn’t true. In 2013 he voted against the re-authorization of the Violence Against Women Act (VAWA).

Millions of women marched on January 21st against violence and for equal pay. Senator Sessions will not use the Department of Justice to fight for women’s rights.
It is equally doubtful that Senator Sessions will use the DOJ to help the mothers of people murdered by police obtain justice from a law enforcement system that believes their Black, Brown and Red lives don’t really matter.

“As an opponent of the vote, he can’t be trusted to be the chief law-enforcement officer for voting rights,” said NAACP President/CEO Cornell William Brooks. President Trump is already saying that the DOJ will work to prosecute the 3 million illegal voters in the 2016 election; Senator Sessions will be sliding back into his old ways of prosecuting people working to empower voters.

Call Members of the Senate Judiciary Committee right now. Tell them to vote “NO” on Senator Sessions; we will pay for the call.

“He’s been a threat to desegregation and the Voting Rights Act and remains a threat to all of our civil rights, including the right to live without the fear of police brutality,” added Simelton.”

“We need someone who will be a champion for all citizens. We will continue to protest and demonstrate as long as he faces the Judiciary Committee for the position of chief law-enforcement officer,” said President of Mobile Branch, Lizzetta McConnell.

If you would prefer to send an email directly to your Senators, we have already written a sample email. You can use our text or write your own.

While the Sessions 6 are marching in Alabama, we march with them at home. While they are getting arrested again in Alabama, hopefully we can at least make a phone call or send an email.

P.S. Call your Senators now and/or Members of the Senate Judiciary Committee and tell them you oppose Sen. Jeff Sessions for U.S. Attorney General; we will even pay for the call.