Georgetown traded in slaves? Of course it did. That was America

IMDiversity 6 years ago Comments Off on Georgetown traded in slaves? Of course it did. That was America 1.1 K

The sale of 272 black Americans to bail out Georgetown University is only shocking if you’ve forgotten our economy was built on the exchange of people. 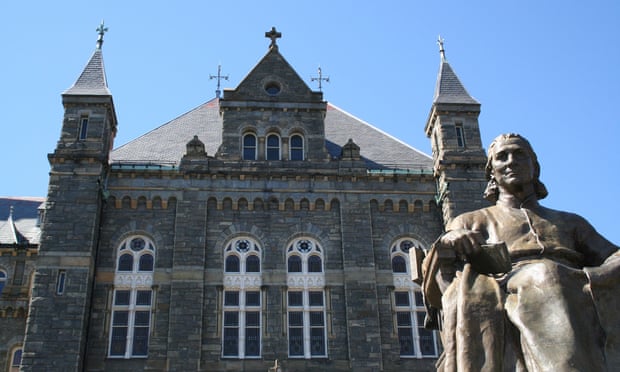 ‘The poetry of tracking down the descendants of this Georgetown firesale, and repaying them in tuition, is undeniable. It fits comfortably with Hollywood-tinged notions of individual redemption.’ Photograph: User: rachaelvoorhees

The story of 13-year-old Cornelius Hawkins and  271 other enslaved black Americans sold “down the river” by cash-strapped administrators during Georgetown University’s early years, is compelling precisely because of how close and real it all is.

Rather than placing the events of slavery in the distant past, unrelated to the world we inhabit today, efforts like the Georgetown Memory Project – which seeks to trace the descendants of those slaves – show how institutions which exist and flourish today participated in the dehumanization and destruction of people. And that their descendants still suffer the consequences.

But as a Georgetown working committee seeks to find the proper answer to these historical revelations, it’s important to look at what projects like this can’t do. And as the university considers, among other steps, free tuition for the descendants of this massive human sell-off, it’s worth noting this story cannot be used to draw up a balance sheet for the appropriate payment of restitution.

The Georgetown story, and the focus on finding the descendants, places a troublesome emphasis on the coincidence of direct ancestry. The debt owed to black Americans for the sin of slavery is not evident in the legers of any one sale, but in the social and economic realities that have defined daily life for 400 years.

Because the simple fact that the sale of black bodies was commissioned by a university does not render the sale uniquely troubling. The sale of black chattel in an act of cold economic calculus in 1838 was as common an act as could be.

Georgetown historian Adam Rothman noted that “[t]he university itself owes its existence to this history” of trade in human flesh. The same can be said for the United States as a whole.

And while the university, in its mea culpa, blushes at the “sheer size” of the sale, and therefore, the injury, this too underestimates the size of slavery’s stain on other American institutions, educational or otherwise.

Conservative estimates of the amount owed by the nation to unfree Black labor are in the neighborhood of $500 billion to $1 trillion.

Holdings in enslaved blacks* constituted for the antebellum American South wealth in excess of all the housing and agricultural land combined.

After the civil war, when that equity was violently liquidated into a citizenry of over 2 million, black Americans watched promises of 40 acres and a mule, and of a Homestead Act to build black wealth through agricultural land dissolve in a maelstrom of reactionary white racism and lack of government will.

Then in 1877 eager blacks who had been marshaling freedom into civic organizing saw that window of opportunity slammed shut as the Tilden-Hayes compromise withdrew northern troops from the south and gave way to the unencumbered enactment of Jim Crow. These failures of recompense, which continue on in ever-mutating forms, are part of what Ta-Nehisi Coates defined as the “compounding moral debts” of slavery in 2014 essay on reparations.

The idea is that in the aftermath of America’s original sin, every gesture away from equity and equality, either by neglect or by design, adds interest to the original, astronomical debt.

The poetry of tracking down the descendants of this Georgetown firesale, and repaying them in tuition, is undeniable. It fits comfortably with Hollywood-tinged notions of individual redemption. We are a nation forever obsessed with the idea of individual responsibility, whether in praise or in punishment. But in the long view of history and racial capital it often fails us.

The debt owed to black Americans does not vary according to its traceability to a specific event.

Indeed the profoundly untraceable nature of the details of black subjugation is part of the machinery of white supremacy. Names were frequently changed and family ties routinely dissected. The records of who was sold to whom, and what profits trace to where was never done with the type of attention that could settle these accounts.

The debt owed to black Americans also does not vary by the guilty party’s ability to pay – which in the case of Georgetown, with its $1.5 billion endowment, is substantial. A fortune made on enslaved black labor that is squandered, laundered or otherwise disconnected from its source does not eliminate the debt.

Of course, all that doesn’t mean we shouldn’t welcome an effort by Georgetown to make amends. We exist in a political climate where congressman John Conyers can, every year for two decades, propose a bill to merely study the idea of reparations, and it never makes it out of committee. We exist in a political climate where even a self-proclaimed revolutionary leftist presidential candidate can’t be bothered to give the topic some earnest reflection. All of which means national reparations are a distant possibility, if even that. Circumstance demands we take what we can get.

But that shouldn’t distract us from figuring out what precisely the lesson of the Georgetown Memory Project is. It’s not that an august institution has been implicated in a historical moral scandal. It is rather, that slavery was a hegemonic social order. Its logic pervaded even the humanistic confines of a Jesuit university campus, because its logic was universal. So were its effects, and so must be the settling of its debt.