National initiative to increase number of faculty from under-represented minorities 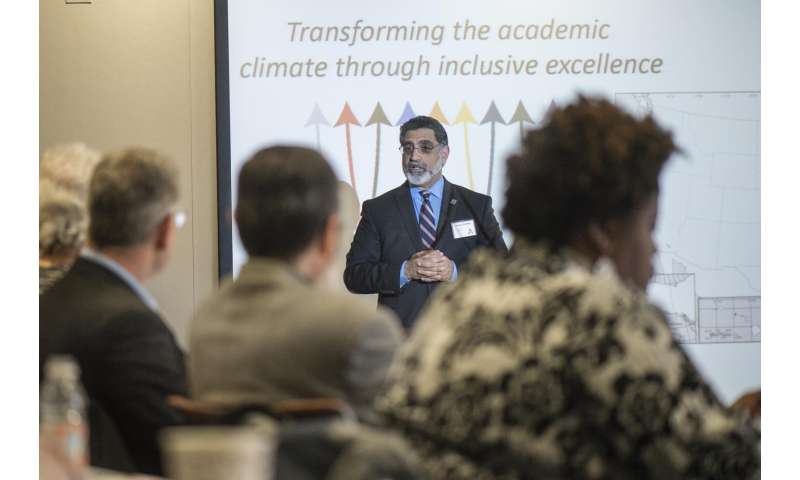 The University of Texas at Arlington hosted this weekend the launch of a multi-year collaborative project among 10 leading educational institutions that aims to increase the number of university faculty from under-represented minority groups.

“Up to now, we have seen that under-represented minorities lose interest in faculty and research careers at a much higher rate than well-represented groups,” said Panos Shiakolas, UTA associate professor of mechanical and aerospace engineering.

“This project aims to improve the climate and promote inclusiveness in graduate education to increase the number of under-represented graduate students and postdocs interested in and prepared for faculty careers in science, technology, engineering and mathematics fields, or related education research,” he added.

The new initiative, funded by the National Science Foundation’s Alliances for Graduate Education and Professoriate program, forms part of $5.9 million in funding for three new alliances consisting of 14 partner universities.

UTA participates as a member of the Center for the Integration of Research Teaching and Learning (CIRTL) network and as a minority Hispanic Serving Institution. The results will be disseminated across the CIRTL network and then nationally.

This new program is one of three grants UTA has recently received to promote doctoral programs focused on STEM fields, with a special emphasis on under-represented minorities and underserved groups.

UTA’s Physics Department received a $563,584 award for the training of Physics Ph.D.s at UTA, again through the Department of Education’s Graduate Assistantships in Areas of National Need program.

“We have received two previous GAANN awards, and during that time, the number of Ph.D. students and graduates increased by 50 percent,” said Ramon Lopez, physics professor and principal investigator on this new grant. “The combination of our strong and growing research program along with student success is the reason we are winning these grants.”

UTA’s Mathematics Department also received a $500,000 NSF Award to operate a three-year bridge project involving 30 students to transition them from bachelor’s degrees to doctoral programs in the mathematical sciences. This three-year project aims at increasing the quality and quantity of doctoral students in the mathematical sciences through strong mentoring and that fast-track component and attracts students to UT Arlington through the Gulf States Math Alliance in Texas, Louisiana and Mississippi.

“During the last 10 years, this UTA mathematics program has successfully supported more than 30 students who completed their Ph.D. in Mathematics, including a large proportion of women and under-represented minorities, supported by the Department of Education’s Graduate Assistantships in Areas of National Need program,” said UTA Mathematics Chair Jianzhong Su, who is the principal investigator on this new NSF bridge project grant.

“We have an award-winning program here at UTA, which makes us competitive for additional grants like this one from the National Science Foundation,” he added.