The Thorny Relationship Between Asians and Affirmative Action

IMDiversity 5 years ago Comments Off on The Thorny Relationship Between Asians and Affirmative Action 1.7 K

The Justice Department plans to investigate whether Harvard discriminates against applicants because of their race, but such efforts are often futile because admissions practices are so complex. 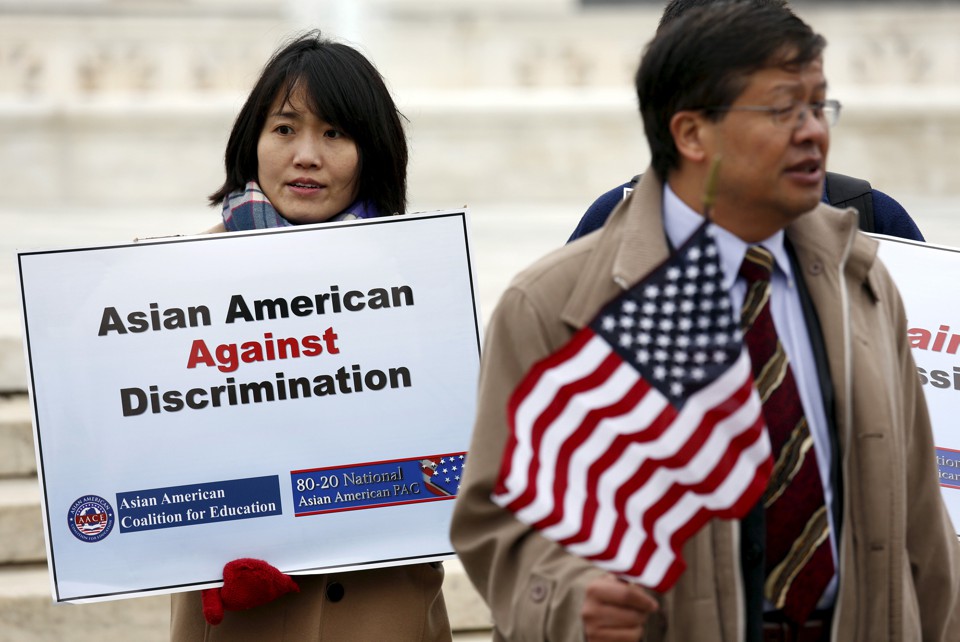 Despite the complexity of the issues at stake, the debate over affirmative action in America is rarely as nuanced as it ought to be. Treating affirmative action as a practice that either hurts or helps an entire racial group, for instance, prevents productive conversations about its role in college admissions.

The limitations of such interpretations of affirmative action are, at times, revealing. Consider the Justice Department’s plans to crack down on “intentional race-based discrimination” in college admissions, an initiative made public by The New York Times this week, based on an internal Justice Department memo obtained by the newspaper. The memo isn’t explicit about whom it considers victims of such discrimination, but the Times—and lots of outlets that subsequently reported on the revelation—didn’t hesitate to read between the lines. The department wants to sue institutions that discriminate against white applications, wrote the Times in its lead. Press releases from progressive advocacy groups decried what they described as another Trump administration campaign to protect white Americans.

But the Justice Department rebuffed the Times for its characterization of the memo. The department clarified that the document simply called for volunteers to investigate the existing claims against Harvard by a coalition of 64 Asian American groups that the Obama-era DOJ failed to resolve.

Proponents of the newly revealed effort, too, were quick to push back against the Times’s line of reasoning, emphasizing that the debate over such admissions policies isn’t one that pits whites against people of color. The de facto accusations of racism, they argue, disregard an entire demographic that’s perhaps most disadvantaged by those policies: Asian Americans.

It's a HUGE leap for the @nytimes to assume that this is about white applicants instead of Asian-Americans. https://t.co/iv5j0yq8CX

There’s plenty of data to underscore concerns that Asian Americans are unduly affected by affirmative action. But quantifying the effects of such policies is notoriously thorny. That’s true more broadly, as well, in part because of how the issue has been litigated.

The Supreme Court’s 2013 ruling in Fisher v. University of Texas concluded that a college seeking to produce a diverse student body can only use race in admissions if all other strategies fail. And even then, it can only use race as one consideration in admissions decisions. In other words, that college is to assess a given applicant holistically, taking into account her academic performance, her geographic location, her proposed major, her life story, and her racial background, among other qualities. That in itself makes it really hard to suss out whether a given race-conscious admissions policy discriminates against an entire race of students.

As Peter Joy, a professor at Washington University Law, said in a statement Thursday: “The fact is, these admissions policies are not discriminating against white applicants any more than colleges and universities [are] favoring applicants who have been active in student government, or those with track records of doing service in their communities.” The same could, arguably, be said of Asian applicants.

The Supreme Court long ago established that student diversity is inherently valuable in education. How colleges go about pursuing that diversity is what’s so contentious. Last year, the Supreme Court upheld the University of Texas’s program, which automatically admits students from the top 10 percent of each public high school but considers race to admit those outside that threshold. (Texas schools are extremely segregated by race and class—nearly half of them serve student bodies that are at least 90 percent black and Latino—which some argue necessitates the “Top 10 Percent Rule” as a means of ensuring racial diversity on university campuses.) The court’s decision to uphold the practice of using race for those outside the threshold, according to experts, effectively settled the legal debate: Generally speaking, as long as colleges make a concerted effort to regularly assess the impact of their policies, and as long as they are unable to promote student diversity through other methods, they can use race as a consideration in admissions decisions.

The suggestion that admissions officers are actively rejecting Asian applicants solely because of their race is almost impossible to substantiate.

What colleges can’t do is use quotas. Such practices, what some refer to as “negative action,” were deemed unconstitutional in the 1978 Supreme Court case Regents of the Univ. of Calif. v. Bakke.

Quotas are what critics of affirmative action tend to think of when they lament the treatment of Asians in college admissions. Two pending lawsuits, for example, accuse Harvard and the University of North Carolina at Chapel Hill of resorting to such practices, of setting limits to the number of Asians admitted. The nonprofit group behind the lawsuits, Students for Fair Admissions, which largely focuses on Asian Americans, points to their static enrollment rates at elite schools as evidence that the schools limit the number of such students admitted. Asians are, after all, the country’s fastest-growing minority group. They’re also applying to and attending college at increasing rates, according to data from the National Center for Education Statistics.

But as I’ve written in the past, the suggestion that admissions officers are actively rejecting Asian applicants solely because of their race is almost impossible to substantiate.

Countless factors inform elite-college admissions decisions—not just because schools are obligated by law to assess applicants holistically, but also because it’s in the colleges’ interest to do so. Elite colleges are trying to build a class of high-achieving, unique students. Accepting the maximum number of those individuals is arguably more important to the institutions than ensuring they have X number of blacks and no more than Y Asians.

In fact, some affirmative-action advocates stress that doing away with race-conscious admissions would actually hurt certain Asian applicants. The category “Asian” encompasses an incredibly diverse spectrum of ethnic groups, from Chinese to Cambodians to Bangladeshi. Most of those groups are severely underrepresented in higher education, some of them more so than African Americans, despite the focus on black students in much of the public discourse on affirmative action. “Many of the things we have fought for in continuing to maintain both the policies and principles behind affirmative action are designed not only to help the overall population but also specific subgroups such as my community,” Mee Moua, a Hmong American who serves as the president and executive director of Asian Americans Advancing Justice, told me last year.

Again, there’s certainly compelling evidence that indicates Asians are disadvantaged by affirmative action—namely East Asians, who constitute the vast majority of elite-college applicants. In 2005, a Princeton study found that Asian Americans must score 140 points more than white students of otherwise comparable caliber on the 1600-point SAT in order to be considered equals in the application process; it also found that they’d have to score 270 points higher than Latino students and 450 points higher than black students.

But it remains unclear how the Justice Department investigation would be able to find proof of intentional race-based discrimination. The Department of Education, for example, concluded in 2015 that it didn’t have enough evidence to uphold a complaint alleging discrimination against Asian applicants at Princeton.

Regardless of the forces animating the Justice Department’s new initiative, efforts like it in the past have, so far, yielded very little.