IMDiversity 4 years ago Comments Off on Racial Diversity Stagnating At US Law Firms 1.9 K

(New York) — The legal industry has again failed to make substantial progress on hiring and promoting minority attorneys, according to Law360’s annual headcount survey, despite more minorities graduating from law school than ever before.

Just over 15 percent of attorneys and less than 9 percent of partners at surveyed law firms identify as a minority. Meanwhile, American Bar Association statistics show that minorities have made up more than 20 percent of law students for almost two decades and recently surpassed 30 percent.

The more than 300 firms we surveyed include 87 of the 100 largest U.S.-based firms, as ranked by the Law360 400, and this marks the third year in which we surveyed firms on the racial makeup of their headcount. 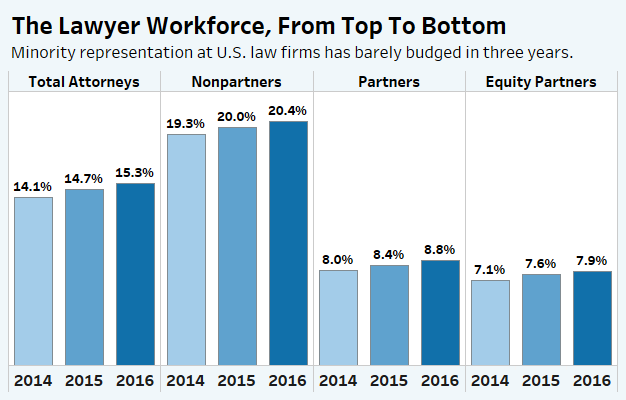 As you move up the law firm hierarchy, diversity diminishes. While just over 20 percent of nonpartners identified as a minority, under 9 percent of partners and less than 8 percent of equity partners did so. 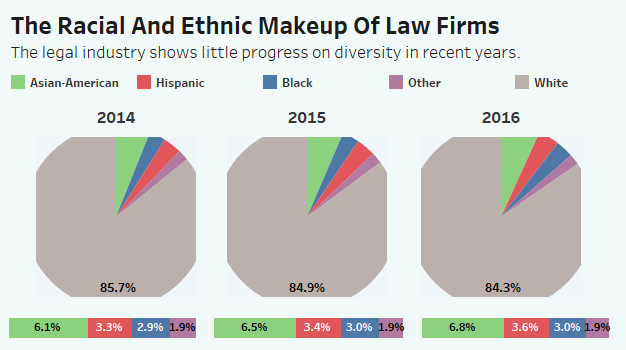 Black attorneys are the least represented at every echelon, especially at the highest ranks. Of over 31,000 equity partners surveyed, just over 500 — less than 2 percent — identified as black. That means that for every black equity partner, there are just under 53 white equity partners.

African-Americans made up almost 9 percent of law students in 2016, and 7 percent since 2009, the first year of available ABA data. 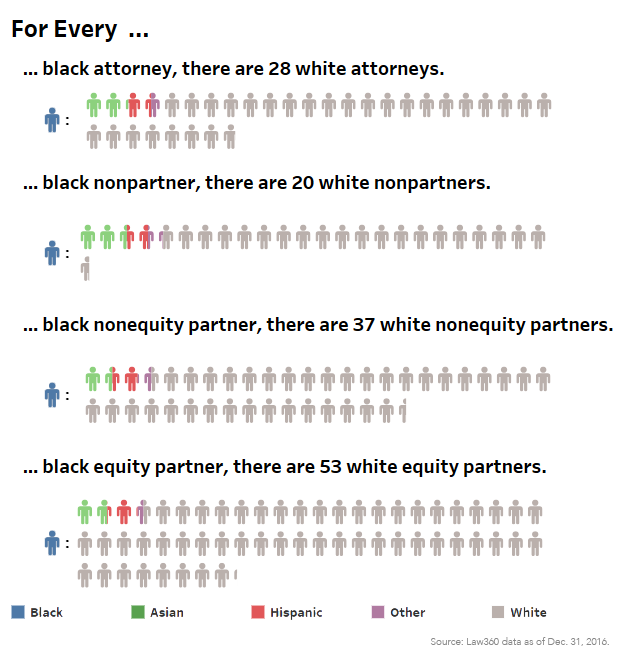 After black attorneys, Hispanics are the least-represented minority in private practice. Yet Hispanics are also the largest minority group among law students, accounting for more than 12 percent of the 2016 student body, according to the ABA.

Conversely, Asian-Americans are the least-represented minority among law students, but they have the most representation in private practice. In 2016, they made up 6 percent of the student body but almost 7 percent of the attorneys at firms surveyed by Law360. 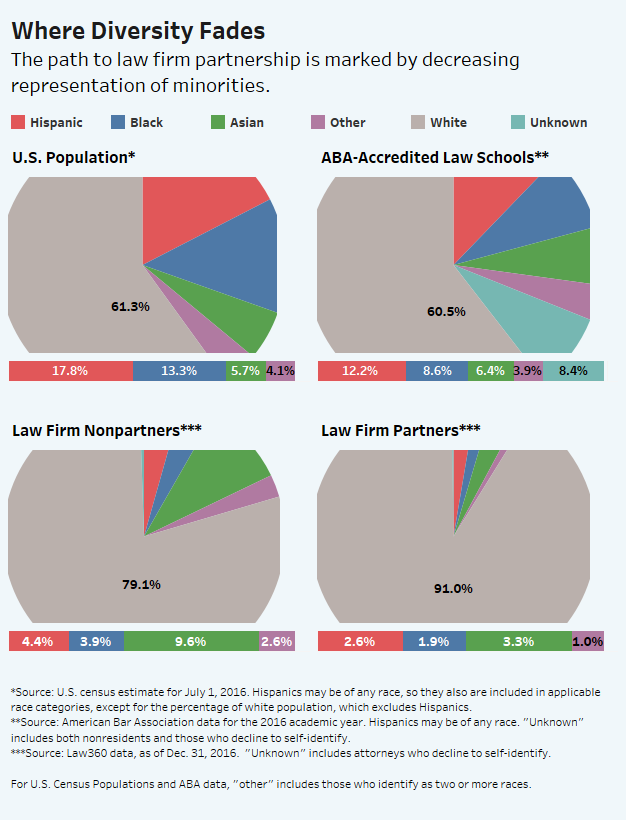 Even though Asian-Americans make up the largest minority in U.S. law firms, they are the least likely to be partners of any of their peers. Just over 20 percent of Asian-American attorneys at surveyed firms are partners, compared with 28 percent of blacks and 33 percent of Hispanics.

That number shoots up to 48 percent for white attorneys.

While firms across the board are failing to hire, develop and retain minority attorneys, Law360’s survey found that midsize firms are particularly struggling. Firms with 150 to 299 U.S.-based attorneys had the lowest percentage of minority attorneys at almost every level of firm hierarchy.

Legal and economic academics have now begun to research implicit bias at law firms and how unconscious behavior can perpetuate a white male-dominated workforce.

Firms such as Goodwin Proctor LLP and Dickinson Wright PLLC have opened up their offices to professors to study the firms’ hiring, review and advancement processes.

These studies not only offer opportunities for the firm to get targeted feedback on how they can do better, but they also create awareness around the problem at the institutional level.

The latter list highlights a group of firms that have above-average diversity at the equity partner level. Part of their success, firms say, lies in cultivating minority attorneys early on in their careers.

By giving young minority attorneys work experience and instilling professional confidence, they can develop client relationships and build books of business — the key to equity partnership. This kind of environment helps retention of minority attorneys, giving them a pathway for advancement.

Law360 also spoke with firms that significantly boosted their minority headcount over the past year. While many of these firms take a deliberate approach to landing diverse talent, at least one says that hiring the best talent in any locale means that you will attract a broader array of attorneys.

Pressure From the Outside

Firms may start to feel some outside pressure to improve their ranks of diverse lawyers. Proactive clients such as Hewlett-Packard Inc. and Facebook have recently unveiled new incentive programs that aim to make diversity part of the bottom line.

While these are not the first attempts by general counsel to diversify private practice, experts agree the new programs could lead to progress.

Outside counsel can influence how projects are staffed and work gets assigned. Unless more of those assignments go to minorities and women, diverse attorneys will never be able to advance — leaving firms looking a lot like they do now.

Methodology: Law360 surveyed over 300 U.S. firms, or vereins with a U.S. component, about their overall and minority headcount numbers as of Dec. 31, 2016. Only U.S.-based attorneys were included in the survey, and firms had to have at least 20 U.S.-based attorneys to participate. Some attorneys declined to self-identify a race.