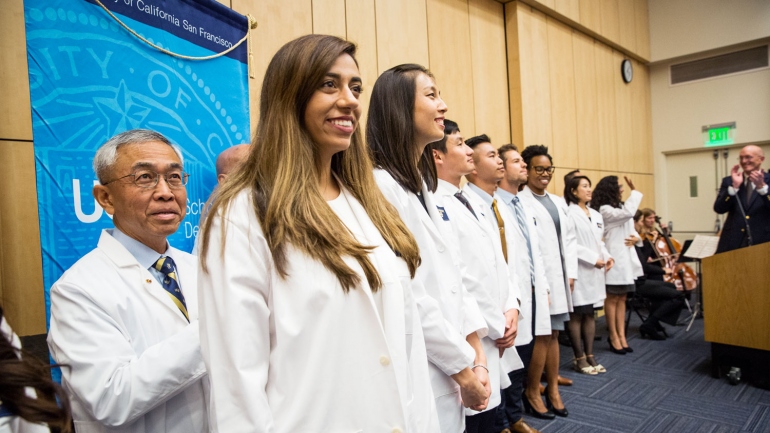 UCSF School of Dentistry’s students line up on stage during their white coat ceremony, a rite of passage when new students receive their first white coat. Photo by Elisabeth Fall

Underrepresented minority dentists represent a smaller percentage of the dental workforce and are unevenly distributed in relation to minority populations in the United States, according to a study by researchers at UC San Francisco and the Bronx-Lebanon Hospital Center Dental Department.

The paper recommends improvements through a longer, deeper and sustained educational pipeline, robust systems of care, and genuine culture of inclusion. It was released on Dec. 5, in the December issue of Health Affairs, which contains a dozen studies dedicated to oral health.

“We found a daunting shortage of underrepresented minority dentists, which indicates that the cumulative impact of current policy efforts to increase workforce diversity is woefully inadequate – despite initiatives at the local, state and federal level,” the authors wrote. “Dentists who want to serve high-need communities may be unable to do so, given the current economics of the dental practice environment and the lack of oral health parity.”

The study was initiated by senior author Paul Gates, DDS, MBA, associate professor at the Icahn School of Medicine at Mount Sinai and chair of both the Bronx-Lebanon Hospital Center Dental Department and the Dr. Martin L. King Jr. Health Center. Lead author Elizabeth Mertz, PhD, MA, associate professor of preventive and restorative dental sciences in the UCSF School of Dentistry, also wrote a separate analysis and commentary paper in this special issue on the development of an oral health care system that alleviates disparities and reduces dental disease.

African-Americans, Hispanics or Latinos, and Native American or Alaska Natives in the United States are underrepresented in the dental workforce, and experience large disparities in oral health and access to dental care.

The study found that for parity, 53,753 underrepresented minority dentists nationwide are needed – 31,214 Hispanics or Latinos, 19,714 African-Americans, and 2,825 Native American or Alaska Natives.

In the Health Affairs study, Gates, Mertz and their research team used a 2012 national sample survey of underrepresented minority dentists to quantify the shortage. They also examined these dentists’ practice patterns in relation to the characteristics of the communities they serve.

The researchers found that members of minority groups represent larger shares of these dentists’ patients than of the populations in the communities where the dentists are located. Compared to counties with no underrepresented minority dentists, counties with one or more such dentists are more racially diverse and affluent, but also have greater economic and social inequality.

Dentistry policymakers are aware of current issues related to underrepresented minority dentists. However, the underlying problem is not a lack of vision or options but rather a lack of political will and resources to implement change, said Mertz, an affiliate faculty member in the Healthforce Center and the Philip R. Lee Institute for Health Policy Studies.

In a separate analysis and commentary paper, Mertz stated that, “while the importance of oral health for overall well-being cannot be overstated, the country’s current dental delivery system struggles to address effectively the two most common oral diseases – caries and periodontal disease – which are among the most prevalent of all chronic diseases and largely preventable.”

Mertz’s commentary explains the evolution of contemporary U.S. dental care policy and practice, highlighting the challenges resulting from the dental system’s separation from the rest of health care. She also explores the implications of this divide for the future of oral health policy and system reform.

How UCSF is Addressing Shortage of Minority Dentists
The UCSF School of Dentistry is taking concrete steps to address the significant shortage in underrepresented minority dentists.

1. Increasing the enrollment of underrepresented minority pre-doctoral students in entering classes, from 2.5 percent in 2006 to 19.3 percent in 2016.
2. Since 2011, the Admissions Committee has used holistic review, which is a balanced assessment of an applicant’s potential and capabilities through examination of an applicant’s attributes, experiences and academic metrics. This gives a more complete view of the applicant beyond the traditional cognitive measures of academic success, such as GPA and dental aptitude test scores.
3. Offering the UCSF Interprofessional Health Post-Baccalaureate Certificate Program, which provides a pipeline for promising college graduates who demonstrate passion for pursuing a career in dentistry.
4. The “DentStay” hospitality program allows currently enrolled underrepresented minority pre-doctoral students to interact with and provide aid with housing to underrepresented minority and students from disadvantaged backgrounds during their visits for admission interviews.
5. Providing scholarship opportunities for promising students from economically disadvantaged backgrounds through the Dean’s Scholarship for Opportunity Fund.