Watch: 7 of This Year’s Most Memorable — and Inspiring — Graduation Speeches

IMDiversity 4 years ago Comments Off on Watch: 7 of This Year’s Most Memorable — and Inspiring — Graduation Speeches 1.2 K

As graduates around the country receive their diplomas, pose for photos, and make plans for their futures, they will likely listen to a series of long commencement speeches. This is when celebrities, students, and faculty celebrate their accomplishments. Pursue your dreams, they’ll say. Reach for the stars.

But each year, there are always a few speeches that reach past the clichés to comment on current events, offer rare advice, and make people laugh.

We collected a few of the season’s best:

Oprah Winfrey at USC: In an Era of Cynicism, ‘Exemplify Honesty’ — and Vote 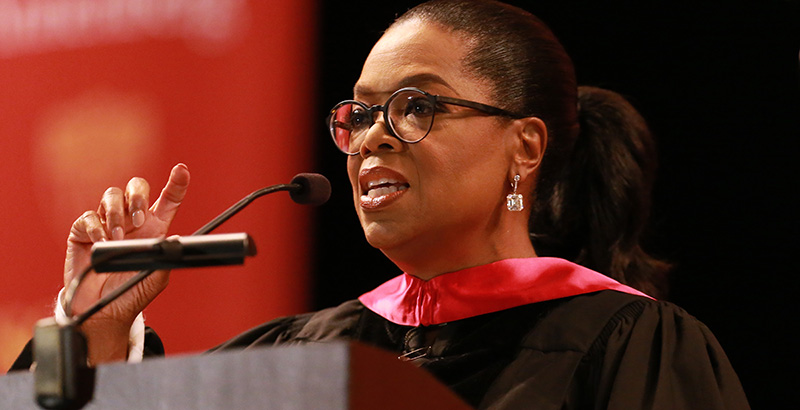 In the words of Oprah Winfrey, graduates are being “catapulted into a world that appears to have gone off its rocker.” In a speech at the University of Southern California’s Annenberg School for Communication and Journalism, Winfrey asked graduates to declare war on cynicism and embrace honesty.

Winfrey made only a passing reference to politics, encouraging graduates to vote.

“So, I hesitate to say this, because the rumors from my last big speech have finally died down, but here it is. Vote. Vote. Vote.” (See the transcript here.)

Hillary Clinton at Yale: The Speech With the Hat

Hillary Clinton brought out a Russian hat during her speech at a graduation event at Yale.

“If you can’t beat them, join them,” she joked.

Yasmin Younis, a student speaker at Boston University’s commencement and the daughter of Iraqi immigrants, spoke about how she reclaimed her name when she arrived at the school. Before college, she used an anglicized pronunciation of her name and neglected her middle name. But as an undergraduate, she started to proudly refer to herself in full: Yasmin Liwa Younis. She compared her identity struggle to other hardships she and her classmates faced — Boston winters, difficult classes, and social adjustments.

“Every struggle we overcame added to our story. It helped us figuratively reclaim our names, like my struggles pushed me to literally reclaim mine.” (Read more about Younis here.)

Chadwick Boseman at Howard: A Wakanda-Flavored Call to ‘Savor the Taste of Your Triumphs’

At Howard University, alumnus Chadwick Boseman of Black Panther fame remembered his own time on campus, crossing paths with Muhammad Ali and participating in student protests. He praised graduates for their own activism this year and explained how his time protesting as a student prepared him to deal with discrimination later in his career. Boseman also encouraged students to appreciate their graduation experience.

“Invest in the importance of this moment, and cherish it. … Savor the taste of your triumphs today, don’t just swallow the moment whole without digesting what has happened here.”

He ended the speech with a “Wakanda salute” from Black Panther, saying “Howard forever.” 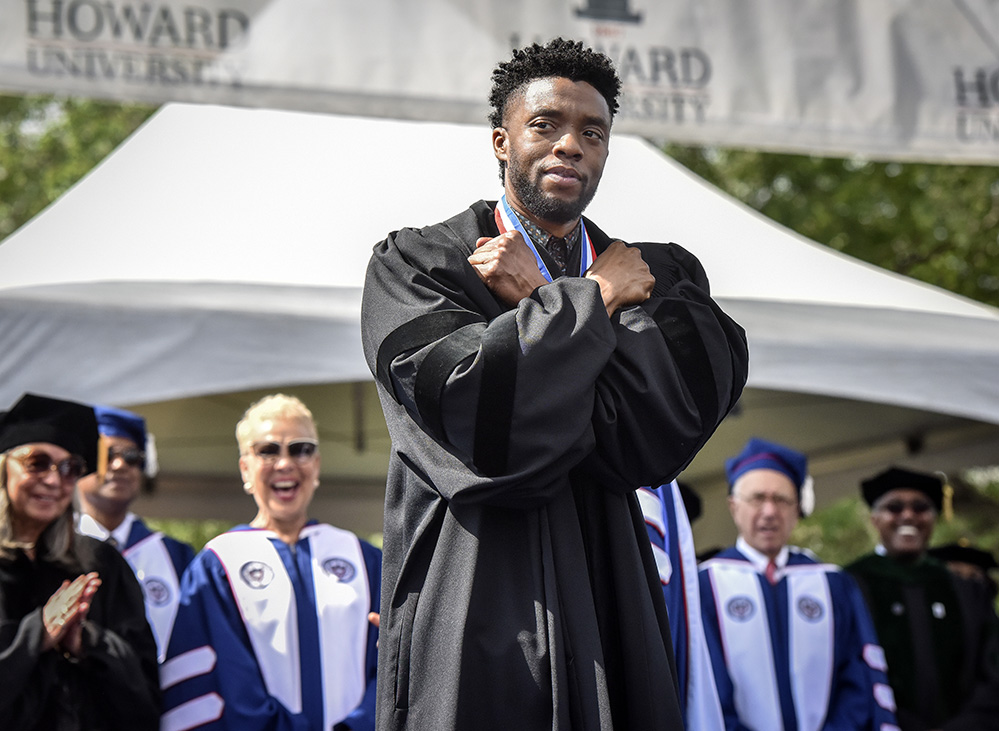 Actor Chadwick Boseman gives a Wakanda salute to the crowd as Howard University holds its commencement ceremonies on May 12, 2018, in Washington, D.C. (Bill O’Leary/The Washington Post via Getty Images)

Retired soccer star Abby Wambach spoke to graduates at Barnard College about the expectations women face in the workplace, the power of learning from failure, and the importance of lifting up other women.

Wambach compared the commencement to being honored at the Excellence in Sports Performance Yearly Awards after her retirement from professional soccer in 2015.

“Here’s what’s important,” she said. “You’re allowed to be disappointed when it feels like life’s benched you. What you aren’t allowed to do is miss your opportunity to lead from the bench. … If you’re not a leader on the bench, don’t call yourself a leader on the field.” (See the transcript here.)

Ronan Farrow at Loyola Marymount: How He Almost Gave Up on the Harvey Weinstein Investigation That Won Him the Pulitzer

Ronan Farrow, who wrote one of the Pulitzer Prize–winning stories that brought down Harvey Weinstein and electrified the #MeToo movement last year, spoke to graduates at Loyola Marymount University about the process of investigating and writing about Weinstein — and the moment he almost gave up. Farrow told graduates he hoped they, too, would persist when they faced obstacles in their work.

“I didn’t stop. Because I knew I’d never be able to live with myself if I didn’t honor the risks those women had taken to expose this. But also, less nobly, because I really had gambled too much and there was no way out but through.” (See the transcript here.)

Jimmy Carter at Liberty University: A Jab at Trump

Former president Jimmy Carter bragged that the crowd to see him at Liberty University was bigger than the one that gathered to see President Donald Trump give the commencement address there last year.

“I don’t know if President Trump would admit that or not,” Carter said.

Author and columnist Mitch Albom wrote in The Detroit Free Press that he heard “the best commencement speech of the year” — not at a high school or college graduation, but in a phone call.

The “speech” came when Albom interviewed a local high student, Sean English, who lost his leg a year ago when hit by a car; the accident occurred while English was on the side of the road helping a family that had car trouble. Another woman who had stopped to help was killed. When Albom talked to English, the student had recently attended his prom and participated in a track meet with his prosthetic leg. Yet English was relentlessly positive.

“I mean, life can always be worse. You can go to your local hospital and see people in positions much worse than what you’re experiencing. So you should always remember to be grateful for that,” English said. (Read the full column here.)